In this series of articles, we take robot innovations from their test-lab and bring them to a randomly selected workplace in the outside world. We discovered that Lunar Zebro is not only good for risky endeavours on extraterrestrial terrains, but that these sturdy self-organising little rovers can also simplify the life of hardworking interior decorators.

‘Shoot for the moon’ is taken quite literally by this team of students and professors from TU Delft. “We want to make the exploration of the moon available for a wider audience”, says Pieter van Santvliet, partnerships coordinator at Lunar Zebro. “So we build the world’s smallest and lightest rover.”

And what is the key to making a robust space vehicle as simple and cheap as possible? Korneel Somers, the team’s content creator, says: “The key is to not focus on one thing, but to create an entire system of collaborations”. 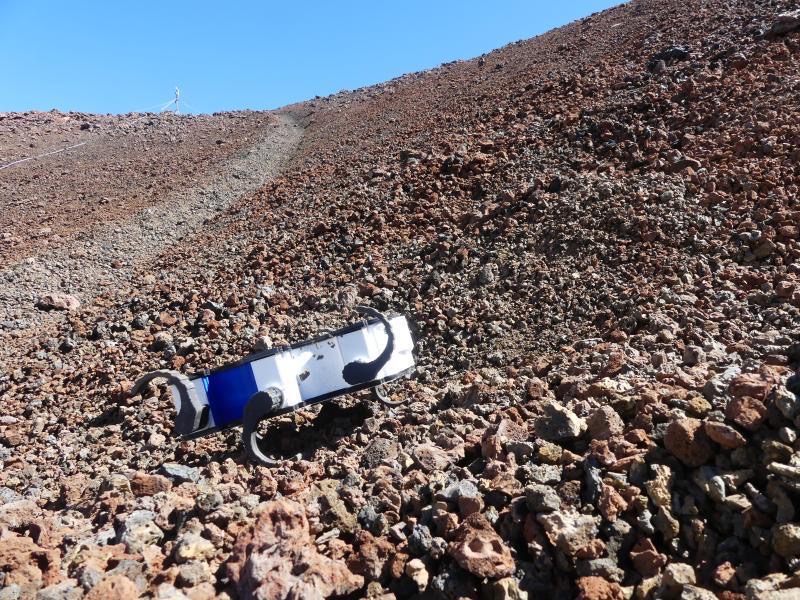 A render of how the swarm would look on the moon 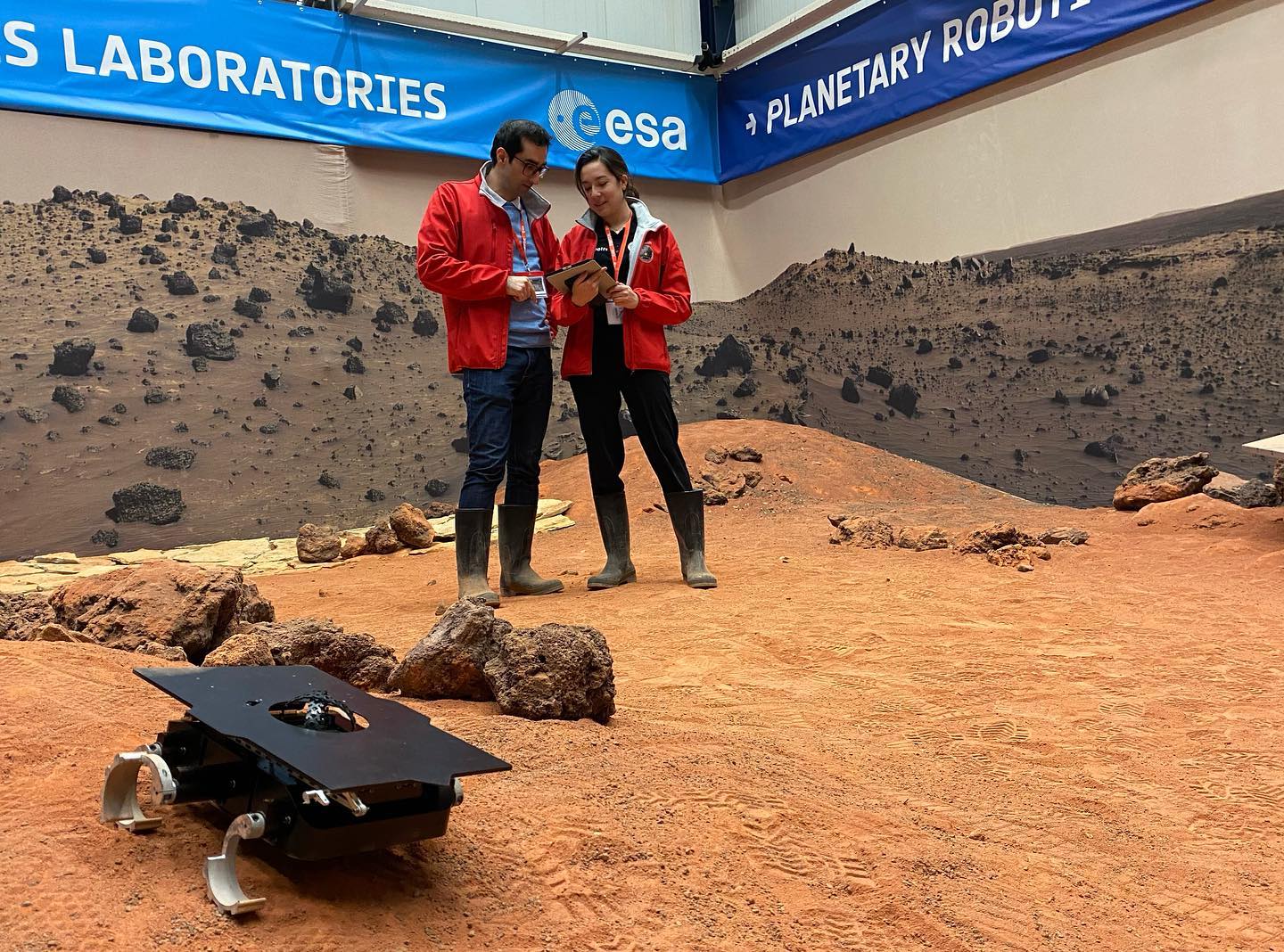 Testing the Lunar Zebro on a rugged terrain

Genius steals and this project is always looking for existing robotic innovations to combine and improve upon. Zebro’s distinctive C-shaped legs were sourced in this way. These plastic half-circles rotate over the highest point in the C, enabling the robot to take little steps on uneven terrain. The Lunar Zebro Legs Team coordinates these 6 identical parts with a special algorithm, resulting in a walking motion. Other teams are Team Thermal, Team Body, Team Power and so on. 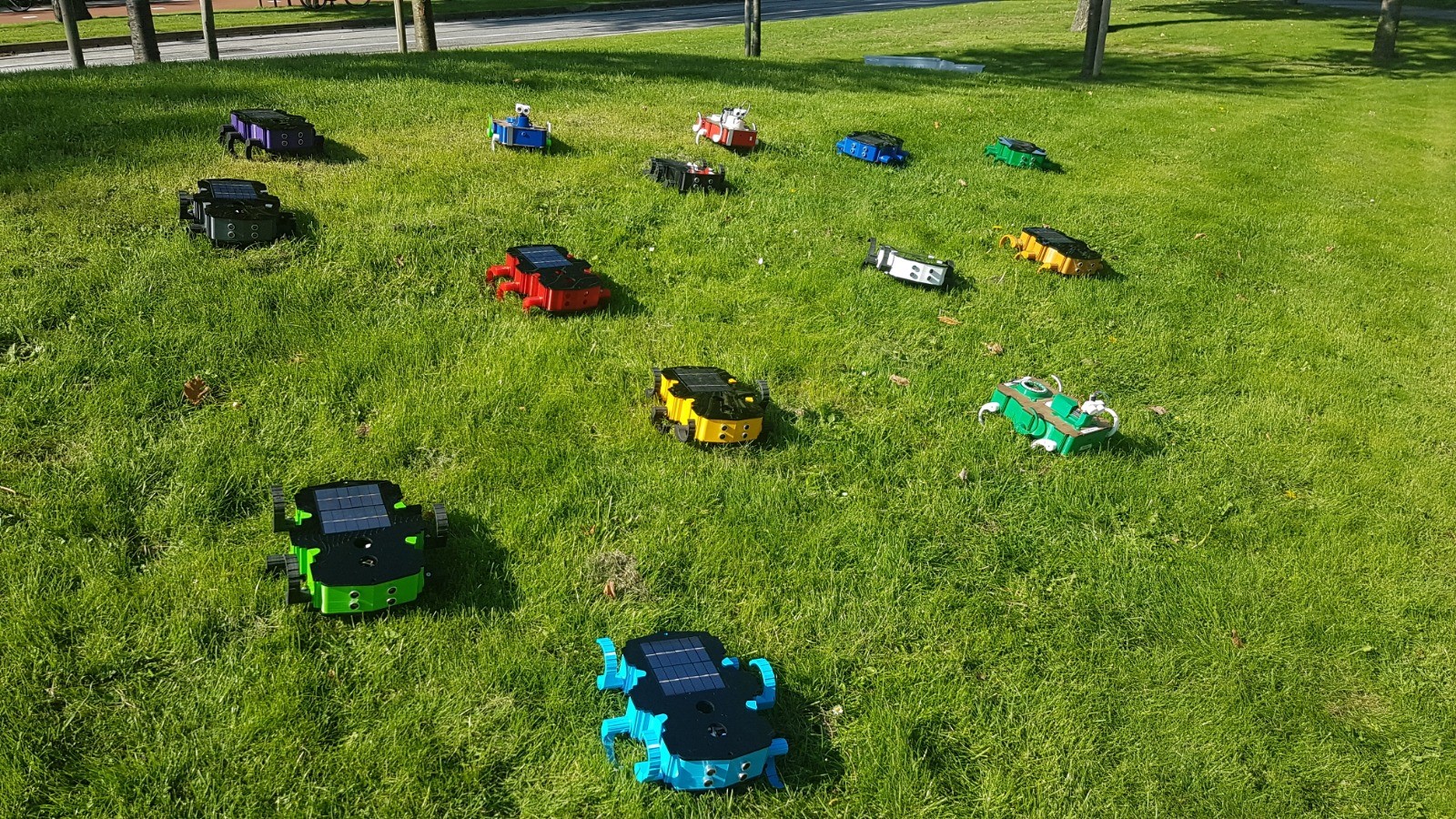 A collection of Lunar Zebro’s on the lawn 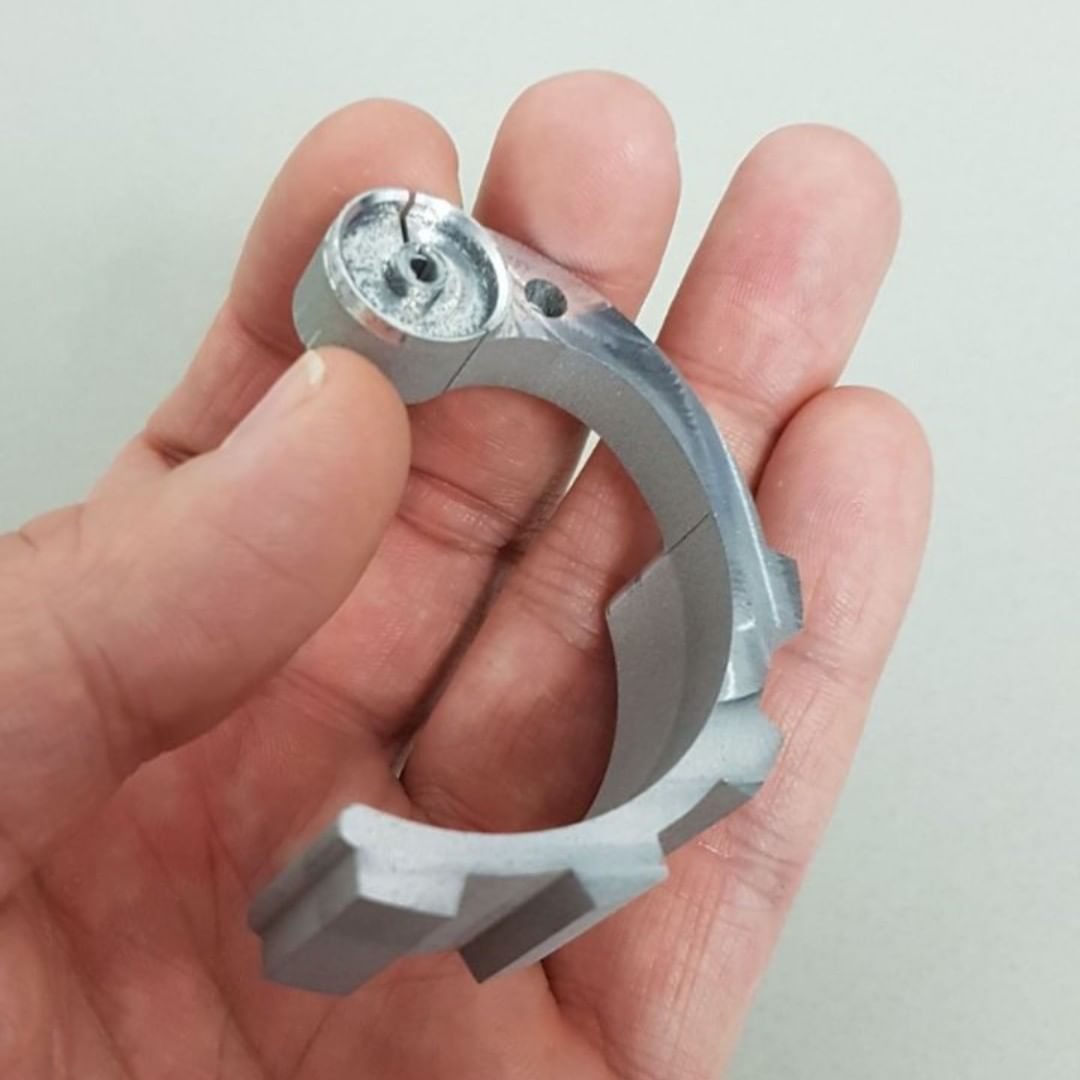 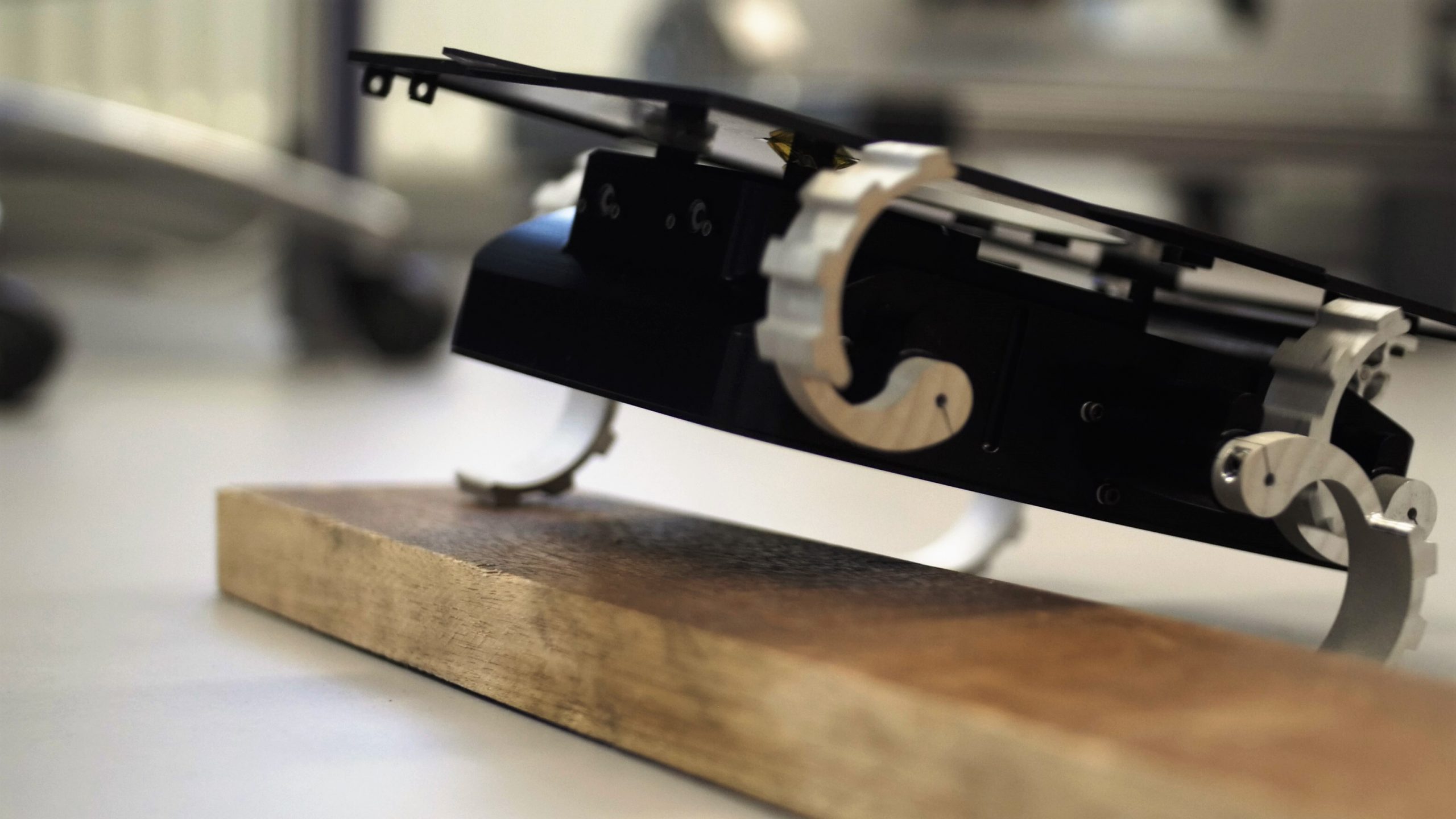 The power of the concept manifests itself through the collective. Individually, the rovers have a simple design and are highly customisable. But collectively, they can in theory accomplish complex tasks. Zebros can work in a swarm, each robot making autonomous spur-of-the-moment decisions while the collective is achieving a common goal. And because they are cheap, losing one robot is not the end of the mission.

Sounds good. Current space missions are expensive and therefore highly focused. Affordable robots could open up moon exploration to a much wider range of research projects. Imagine we let rovers swarm the moon’s far side (the quietest radio location near Earth), to look for cosmic signals from intelligent life. Also, the extremely harsh conditions on the moon challenges Lunar Zebro students to become exceptional engineers.

But we are also curious what the Zebros may do on planet earth. Like all inventions, they will surely pop-up in unexpected places. To catch a glimpse of a possible future, we asked a professional decorator: “What would happen if you would use this?” 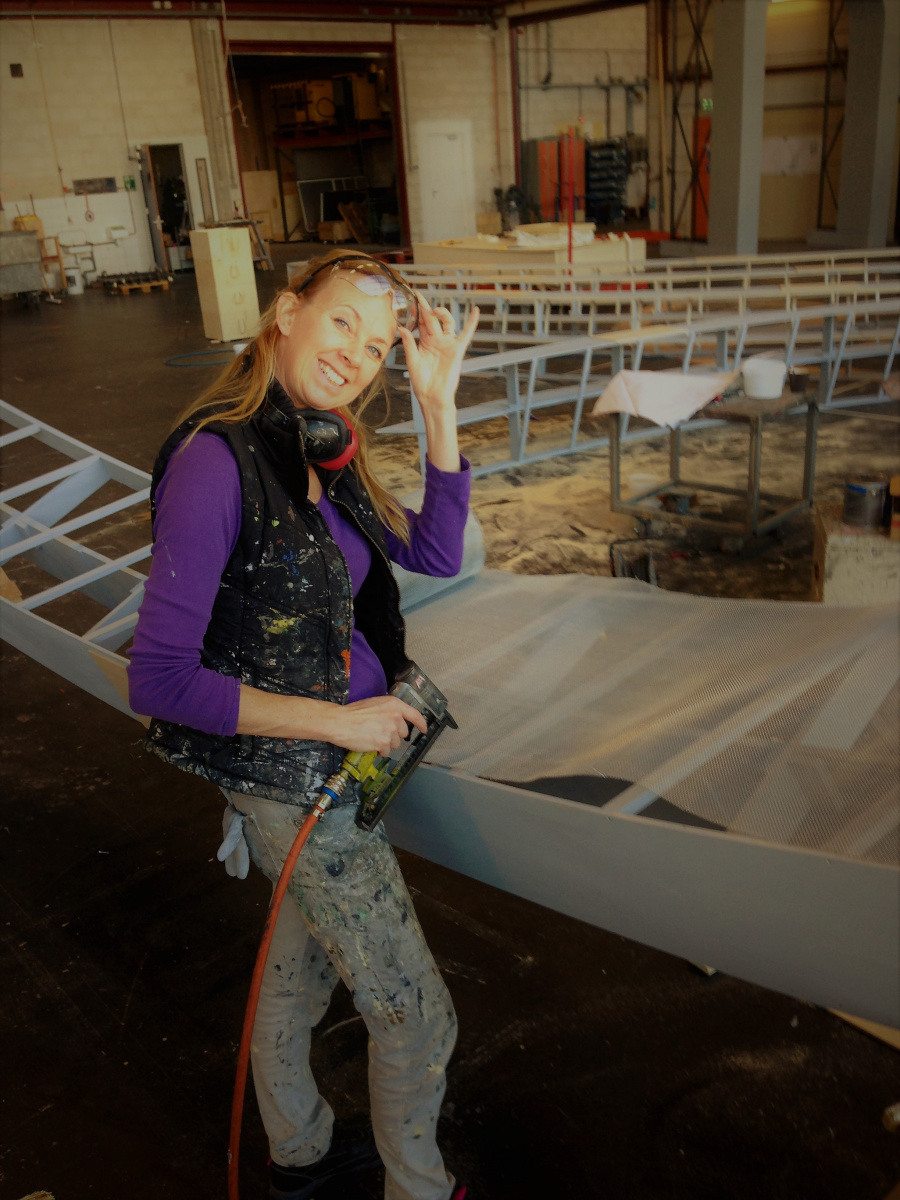 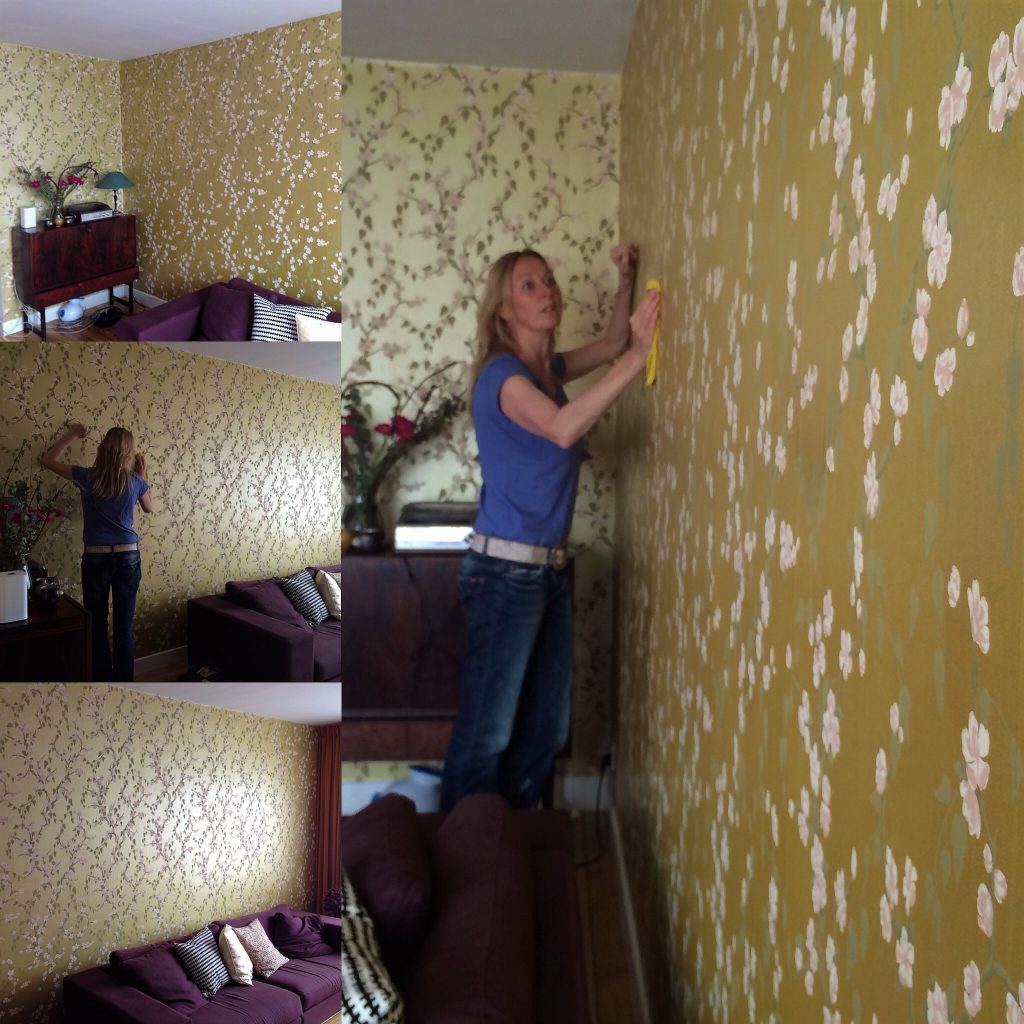 Selma having wall-paper with care for detail

Meet Selma van Gent. An inspiring professional who works as a decorator and interior designer. Which means she builds decors, is trained in decorative painting and is an expert in hanging wall paper. She first tells us she is “anti-computer and actually anti-anything-technological”. But then she sees the Zebros and starts exploring the possibilities of these little machines, and her ideas keep flowing. 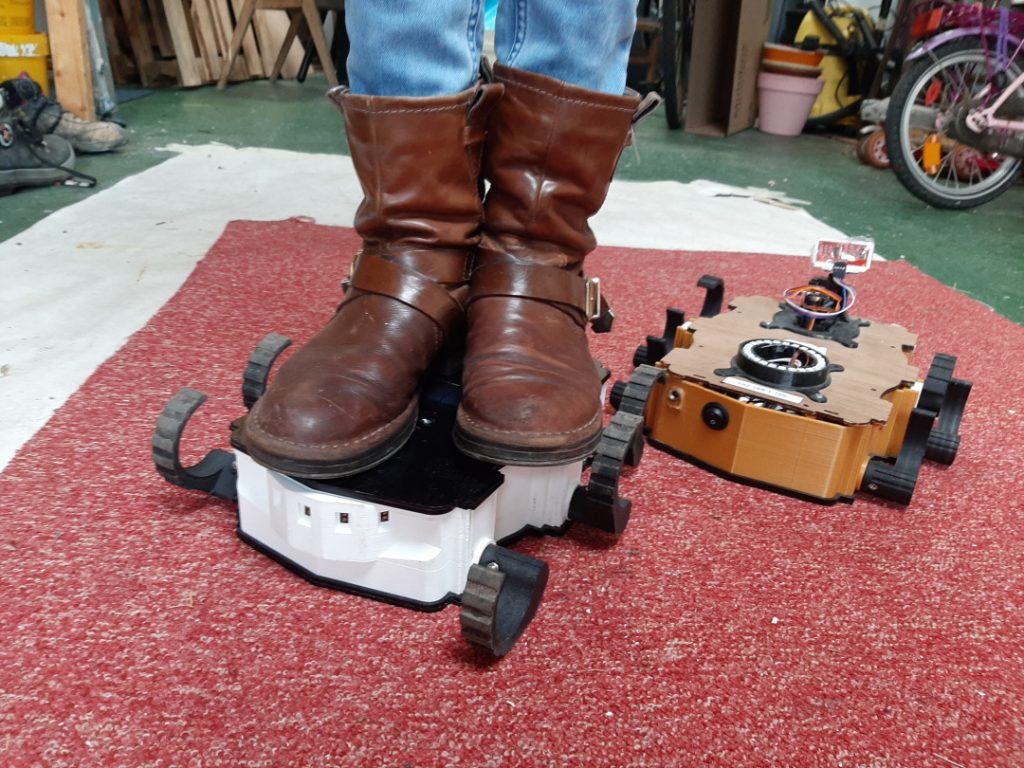 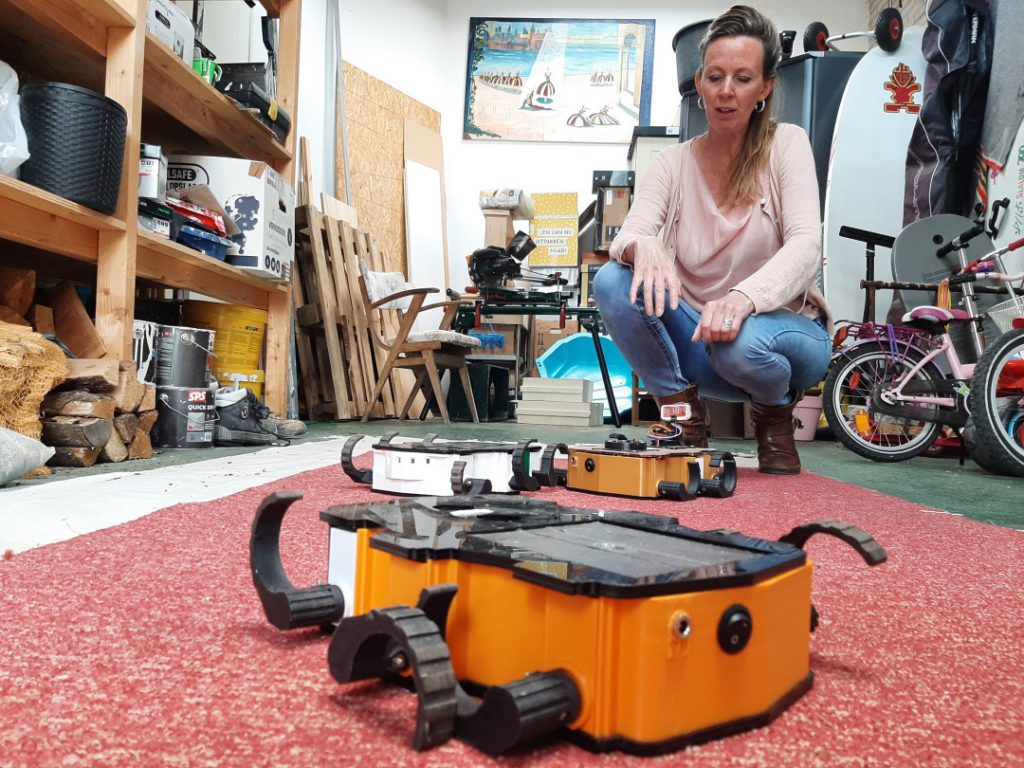 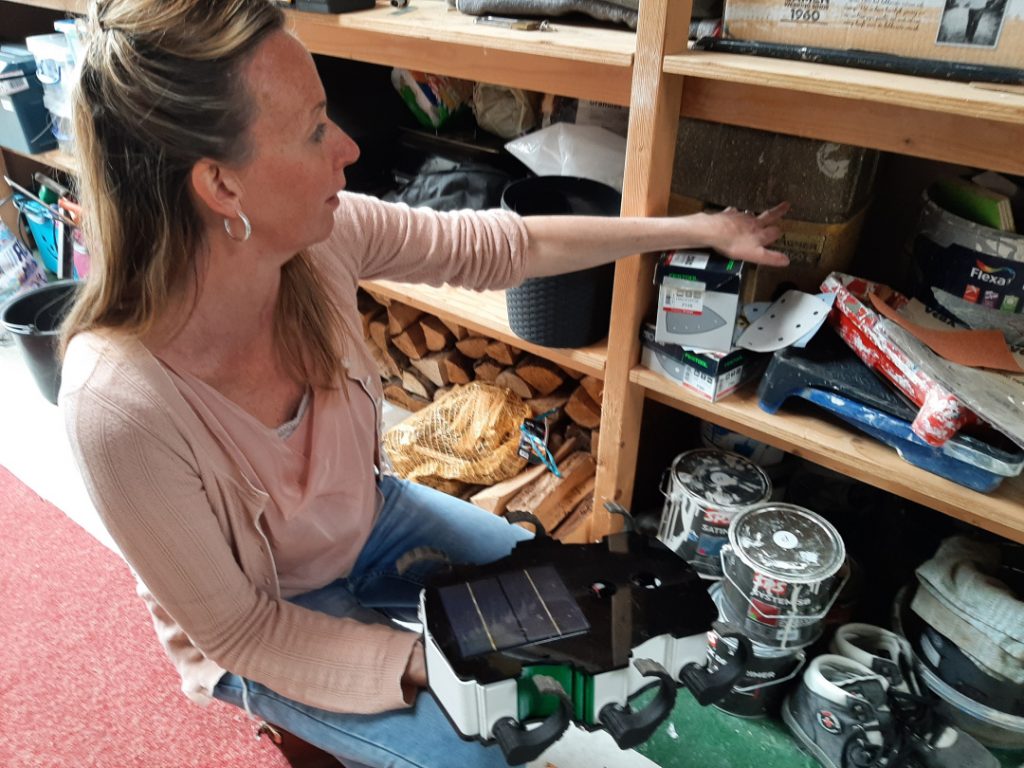 Mapping the building site
“When I build something on-site, I have to take into account everything about the entire space”, she explains. “I have to measure distances and corners, estimate what sound does, how high things can be. Sometimes I get bogged down in details.” With a legion of Zebros at her command, Selma could just send them out to map the physical dimensions of the place, while she looks at the overall picture. 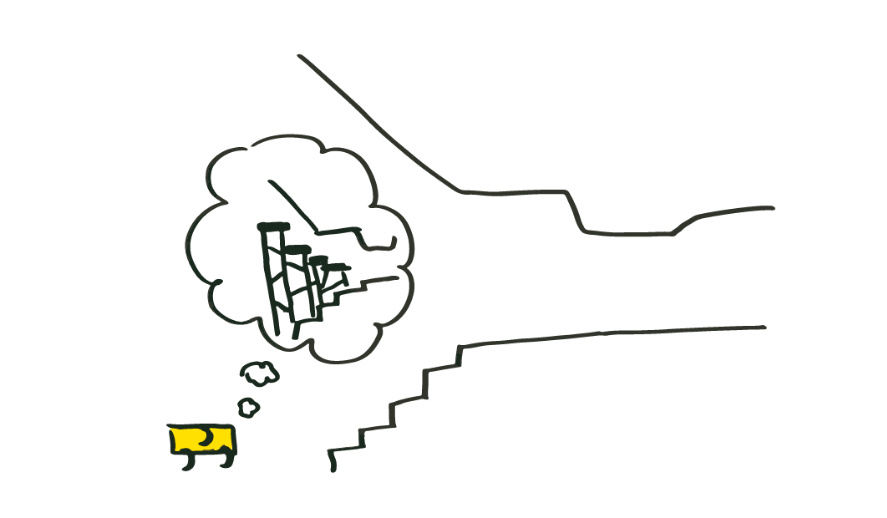 When she does paper hanging, Selma usually needs a structure to stand on. This scaffolding must be sturdy and safe, but also perfectly tailored so every wall is within reach. It often takes endless tinkering to get it just right. If Zebro rovers would be strong enough, and able to crawl on top of each other and interlock, a swarm of Zebros could be a wonderful self-constructing scaffold says Selma: “If they can analyse the required heights and combine these with my preferences, they could make the entire structure without me. That would be such a relief.”

Always bring me the right tools for the job 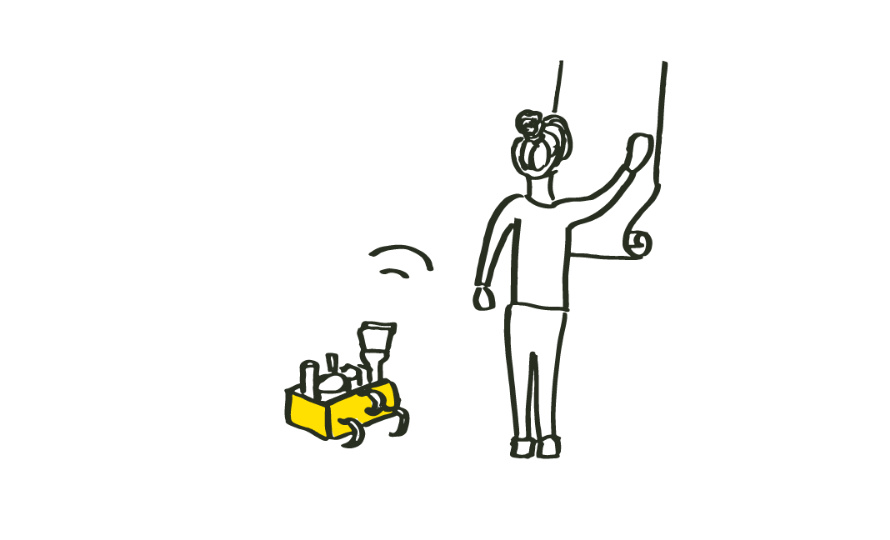 Our handy-woman can do all kinds of jobs, and she is blessed with all kinds of tools. Sometimes this blessing becomes a curse. When Selma is painting on Tuesday, and on Wednesday hanging wall-paper, and making props on Thursday, there are so many changes that she doesn’t always have all the right tools with her in the van. “I would tell the rovers what job I had today and they would know which tools I would need,” she says. “And they would stock the van for me and then always bring me the right tools for the job.” This would save a lot of headspace and allow Selma to focus on what she likes to do most.

These cheap robots are now made to explore the moon and withstand the harsh environment of space, but who knows what the future holds? Maybe they will eventually land on planet earth: in the creative spaces of professional decoration. 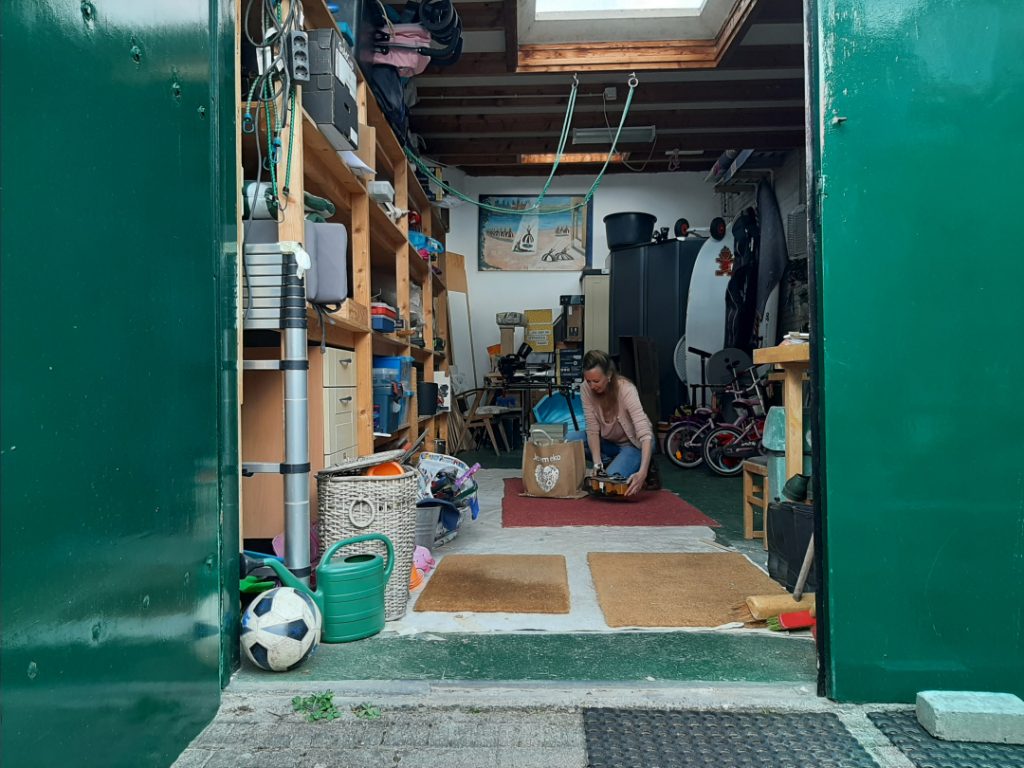 The post Moon exploration rovers from Lunar Zebro – What if you would use this? appeared first on RoboValley.