Navigating beneath the Arctic ice 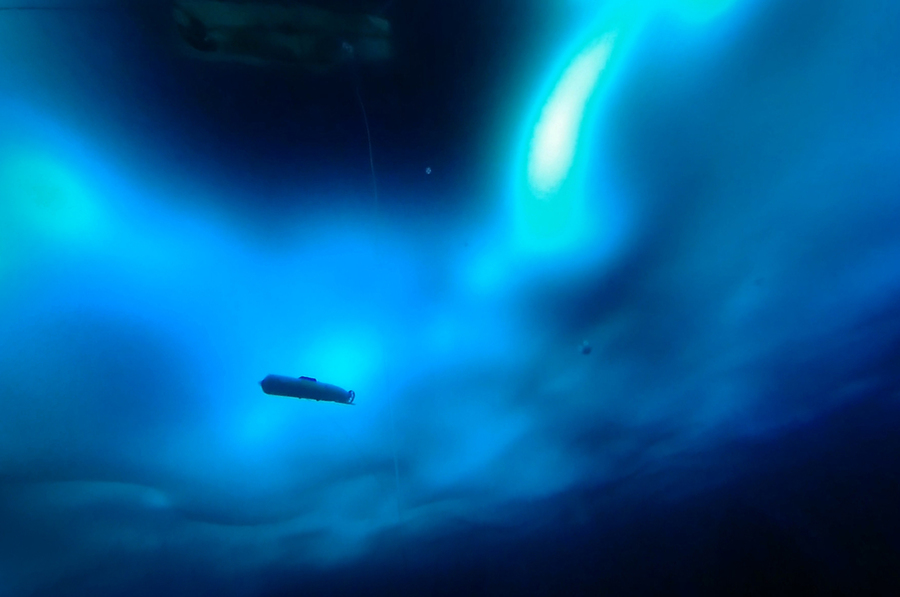 For scientists to understand the role the changing environment in the Arctic Ocean plays in global climate change, there is a need to map the ocean below the ice cover. Image credits: Troy Barnhart, Chief Petty Officer, U.S. Navy

There is a lot of activity beneath the vast, lonely expanses of ice and snow in the Arctic. Climate change has dramatically altered the layer of ice that covers much of the Arctic Ocean. Areas of water that used to be covered by a solid ice pack are now covered by thin layers only 3 feet deep. Beneath the ice, a warm layer of water, part of the Beaufort Lens, has changed the makeup of the aquatic environment.

For scientists to understand the role this changing environment in the Arctic Ocean plays in global climate change, there is a need for mapping the ocean below the ice cover.

A team of MIT engineers and naval officers led by Henrik Schmidt, professor of mechanical and ocean engineering, is trying to understand environmental changes, their impact on acoustic transmission beneath the surface, and how these changes affect navigation and communication for vehicles traveling below the ice.

“Basically, what we want to understand is how does this new Arctic environment brought about by global climate change affect the use of underwater sound for communication, navigation, and sensing?” explains Schmidt.

To answer this question, Schmidt traveled to the Arctic with members of the Laboratory for Autonomous Marine Sensing Systems (LAMSS) including Daniel Goodwin and Bradli Howard, graduate students in the MIT-Woods Hole Oceanographic Institution Joint Program in oceanographic engineering.

With funding from the Office of Naval Research, the team participated in ICEX — or Ice Exercise — 2020, a three-week program hosted by the U.S. Navy, where military personnel, scientists, and engineers work side-by-side executing a variety of research projects and missions.

The rapidly changing environment in the Arctic has wide-ranging impacts. In addition to giving researchers more information about the impact of global warming and the effects it has on marine mammals, the thinning ice could potentially open up new shipping lanes and trade routes in areas that were previously untraversable.

Perhaps most crucially for the U.S. Navy, understanding the altered environment also has geopolitical importance.

“If the Arctic environment is changing and we don’t understand it, that could have implications in terms of national security,” says Goodwin.

Several years ago, Schmidt and his colleague Arthur Baggeroer, professor of mechanical and ocean engineering, were among the first to recognize that the warmer waters, part of the Beaufort Lens, coupled with the changing ice composition, impacted how sound traveled in the water.

To successfully navigate throughout the Arctic, the U.S. Navy and other entities in the region need to understand how these changes in sound propagation affect a vehicle’s ability to communicate and navigate through the water.

Using an unpiloted, autonomous underwater vehicle (AUV) built by General Dynamics-Mission Systems (GD-MS), and a system of sensors rigged on buoys developed by the Woods Hole Oceanographic Institution, Schmidt and his team, joined by Dan McDonald and Josiah DeLange of GD-MS, set out to demonstrate a new integrated acoustic communication and navigation concept. 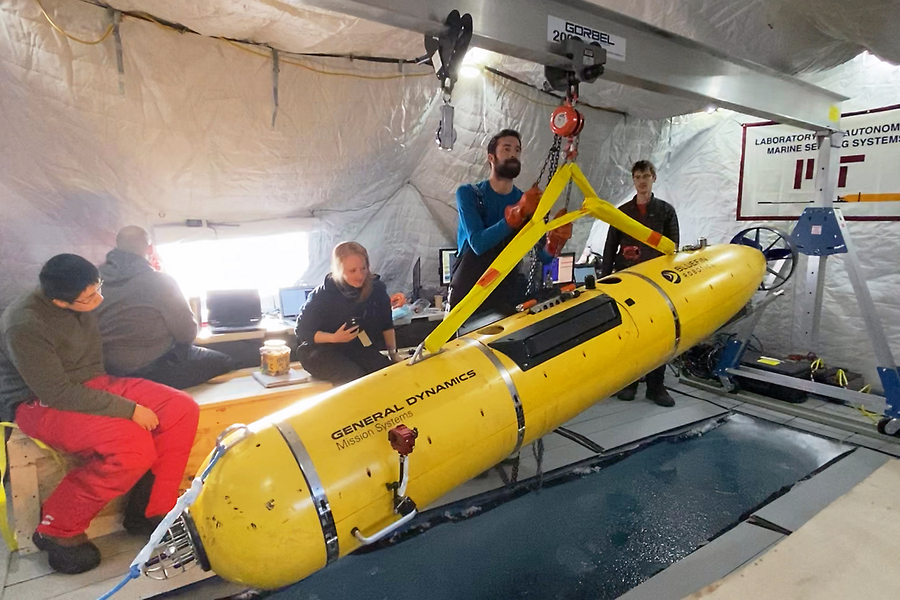 The framework, which was also supported and developed by LAMSS members Supun Randeni, EeShan Bhatt, Rui Chen, and Oscar Viquez, as well as LAMSS alumnus Toby Schneider of GobySoft LLC, would allow vehicles to travel through the water with GPS-level accuracy while employing oceanographic sensors for data collection.

“In order to prove that you can use this navigational concept in the Arctic, we have to first ensure we fully understand the environment that we’re operating in,” adds Goodwin.

Understanding the environment below

After arriving at the Arctic Submarine Lab’s ice camp last spring, the research team deployed a number of conductivity-temperature-depth probes to gather data about the aquatic environment in the Arctic.

“By using temperature and salinity as a function of depth, we calculate the sound speed profile. This helps us understand if the AUV’s location is good for communication or bad,” says Howard, who was responsible for monitoring environmental changes to the water column throughout ICEX. 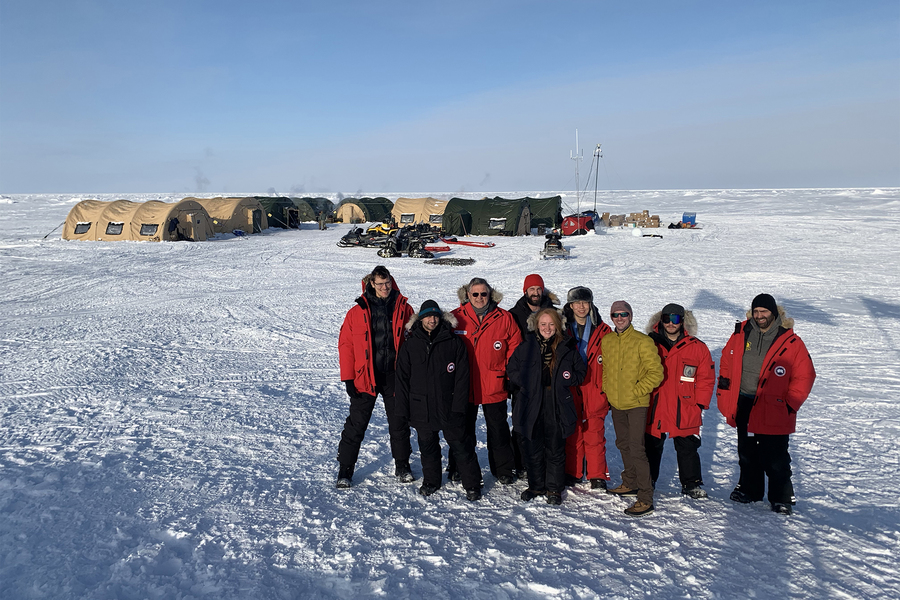 A team including professor Henrik Schmidt, MIT-WHOI Joint Program graduate students Daniel Goodwin and Bradli Howard, members of the Laboratory for Autonomous Marine Sensing Systems, and the Arctic Submarine Lab, traveled to the Arctic in March 2020 as part of the ICEX 2020, a three-week program hosted by the U.S. Navy, where military personnel, scientists and engineers work side-by-side executing a variety of research projects and missions. Image credits: MIke Demello, Artict Submarine Laboratory

Because of the way sound bends in water, through a concept known as Snell’s Law, sine-like pressure waves collect in some parts of the water column and disperse in others. Understanding the propagation trajectories is key to predicting good and bad locations for the AUV to operate.

To map the areas of the water with optimal acoustic properties, Howard modified the traditional signal-to-noise-ratio (SNR) by using a metric known as the multi-path penalty (MPP), which penalizes areas where the AUV receives echoes of the messages. As a result, the vehicle prioritizes operations in areas with less reverb.

These data allowed the team to identify exactly where the vehicle should be positioned in the water column for optimal communications which results in accurate navigation.

While Howard gathered data on how the characteristics of the water impact acoustics, Goodwin focused on how sound is projected and reflected off the ever-changing ice on the surface.

To get these data, the AUV was outfitted with a device that measured the motion of the vehicle relative to the ice above. That sound was picked up by several receivers attached to moorings hanging from the ice.

The data from the vehicle and the receivers were then used by the researchers to compute exactly where the vehicle was at a given time. This location information, together with the data Howard gathered on the acoustic environment in the water, offer a new navigational concept for vehicles traveling in the Arctic Sea.

After a series of setbacks and challenges due to the unforgiving conditions in the Arctic, the team was able to successfully prove their navigational concept worked. Thanks to the team’s efforts, naval operations and future trade vessels may be able to take advantage of the changing conditions in the Arctic to maximize navigational accuracy and improve underwater communications. 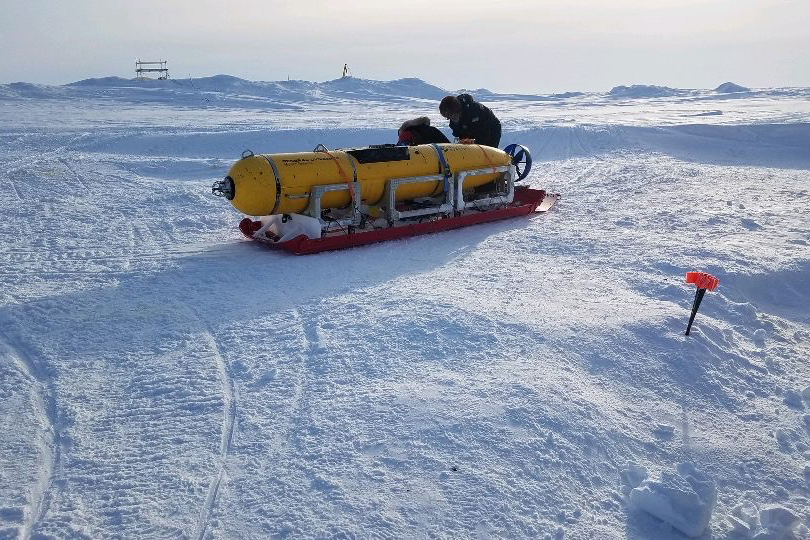 After a series of setbacks and challenges due to the unforgiving conditions in the Arctic, the team was able to successfully prove their navigational concept worked. Image credits: Dan McDonald, General Dynamics Mission Systems

“Our work could improve the ability for the U.S. Navy to safely and effectively operate submarines under the ice for extended periods,” Howard says.

Howard acknowledges that in addition to the changes in physical climate, the geopolitical climate continues to change. This only strengthens the need for improved navigation in the Arctic.

“The U.S. Navy’s goal is to preserve peace and protect global trade by ensuring freedom of navigation throughout the world’s oceans,” she adds. “The navigational concept we proved during ICEX will serve to help the Navy in that mission.”