The double-message promotion of GF2045 was intriguing and I thought it would be similarly interesting to my readers. PR stories featured the host, a wealthy young Russian, who wanted to discuss life-extension technologies, in effect, transhumanism. Two different tracts were advertised: (1) We should think about and discuss the ramifications of the technological transformations of humanity under way or likely to happen in the next 30 years, and (2) He commissioned a human-like intelligent robot in his likeness with terabytes of his personal data and this was to be presented at the show.

“We will devote particular attention to enabling the fullest possible dialogue between scientists, prominent figures from society and industry and representatives of the world’s major spiritual traditions in order to explore the prospects of android robotics; brain-computer interfaces; cognitive neuro prostheses; engineering of the human brain; human consciousness and more. The conference will discuss key topics such as the transformation of humanity; intelligent evolution; the emergence of an immortal meta-intelligence at the planetary scale; and much more” said Dmitry Itskov, host of GF2045.

The roster of speakers appeared to be a group supportive of (or at least ancillary to) Ray Kurzweil’s Singularity projections and, since Kurzweil was also a speaker, I was eager to see and hear everything from all of the speakers. Thus I flew to New York to report on the event.

The first speaker was James Martin, an ex-IBM software engineer instrumental in developing the Sabre real-time reservation system for American Airlines. He was a lanky 6’5″ British man with a kind face and an ease at the podium. His message was simple: we are totally unprepared for the extreme paradigm shifts that need to happen in the near future. Technology and other driving forces have enabled explosive change yet we are making massive mistakes. If we don’t correct them, nature will — brutally. 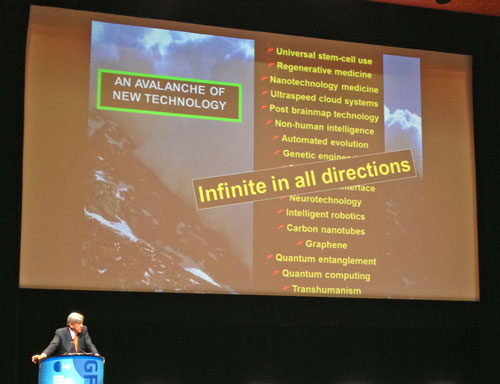 Keynote speaker James Martin citing the list of new technologies, each infinite in all directions.

He cited a long list of emerging technologies, each with a momentum of it’s own and each without regard for the others. He also described his recent activities and interest in identifying global problems — climate change, overpopulation, rampent technological change, environmental withering — which have been worsened by past technologies and asserted that these could be addressed by new technologies. In a book and film, “The Meaning of the 21st Century,” he argued that the human race had only a short time to change its wasteful ways before the planet was irreparably harmed. “The technology to solve the problems is either available or developing; what is missing is broad education and political will,” he said. “A naïve view of the past is that technology gives us mastery over nature. A more appropriate view is that advanced technology causes us to need even more advanced technology in order to survive.” He said that he had established the Oxford Martin School to address four issues: health and medicine; energy and the environment; technology and society; and ethics and governance.

His presentation inspired me to go upstairs afterwards and interview him. But since I hadn’t heard of him before, nor read any of his writings, I wasn’t prepared and could only express my appreciation for his presentation, talk about his home in Bermuda, and ask about the Oxford Martin School. He suggested I watch “Revolution in Oxford” and then get back to him for a more in-depth conversation.

Peter Diamandis, founder of the X Prize Foundation and co-founder of Singularity University, said: “The power to do great always comes with the power to do harm.”  After digesting James Martin’s presentation, Diamandis’ quote struck me as evidence of a paradigm shift in my thinking in relation to robotics. There is greatness in robotics and there is also consequence. And we need to look at the industry, and our roles, with the broader view that Martin described.

After the conference I returned to Greece where I had been vacationing, downloaded “Revolution in Oxford” and was showing it and describing Martin’s talk, my impressions and personal revelation, and my intent to meet him again, to my friends.

James Martin left New York and flew home to Bermuda. A few days later, on June 24th, he went swimming nearby his home, had a heart attack and, tragically, died. A friend whom I had told of the conference and Martin, saw an obituary in a British paper and showed it to me. I was shocked and saddened. Although I barely knew him he had inspired me to rethink in a way I appreciated … and I wanted more. Part of my shock was that there would be no “more” with him. My sadness continues to this day.

The NY Times’ obituary said that Martin viewed “mankind’s onrushing future with alarm and excitement” and that he used his considerable fortune to address his concerns. The Oxford Martin School was his most visible expression but his extensive speaking schedule supplemented that effort.

In relation to robotics, I’ve read robo-ethicists Noel Sharkey, Ronald Arkin, George Bekey and Patrick Lin but up until now, haven’t taken them seriously — I thought them premature, dramatic or single-subjected. Alarmist headlines had turned me off to the subject: “March of the killer robots”; “Big robot is watching you”; “Robot wars are a reality”; “Stop the robot war”; “America’s mindless killer robots must be stopped” – these are just a few of the headlines stemming from Noel Sharkey’s Stop Killer Robots campaign. Nevertheless, Noel Sharkey and the other robo-ethicists have real issues that are important to discuss and that brings me back to James Martin.

The Oxford Martin School headlines “Exploring new frameworks for addressing ethical and governance challenges in a complex and interconnected world” and has research teams focused on:

Advanced robotics are estimated to have an annual economic impact of $2-4 trillion by 2025 and directly touch the lives of hundreds of millions of people. From design aspects to laws and regulation, the ethical and governance challenges are immense and complex and cannot afford to be tuned out. Hence the paradigm shift for which I gratefully acknowledge the inspiration of James Martin.