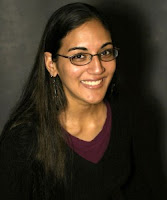 Seema never had any plans to go into business and never in a million years thought she’d start a company. But the opportunity fell into her lap and she couldn’t resist taking the plunge. Seema was always into robots. She participated in robotics clubs as a kid. Her family lived in Florida and they went to Disney World all the time. In the Magic Kingdom, she had her first exposure to robotics – moving human robots on the Pirates of the Caribbean ride. Seema was entranced by how expressive they were. She asked all kinds of questions to which her mom didn’t know the answers. Especially, “Is the hair real?”

Origins.  Seema went to a small college (Harvey Mudd) and took courses outside of her physics and psychology major in CS and robotics. She started a PhD program in robotics at Florida’s USF. She wanted to work on emotional expression in robotics. But she left after her masters because she realized that her interest was more in entertainment than research. 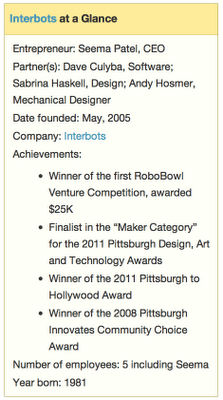 Googling for how to get a job in robotics and entertainment led her to the Entertainment Technology Center (ETC) masters program at Carnegie Mellon. Seema chuckles as she recalls that her question about the hair finally got answered: “All students at the ETC had a profile on the website and I mentioned in my bio that my big robotics question as a kid was whether the hair was real on Disney robots. And I got a reply from Disney saying yes the hair is real!”
Quasi the robot.  Students at the ETC do interdisciplinary projects and Interbots started as one of these. The idea was to create an interactive animatronic robot – Quasi: “He was designed to be autonomous and he had sensors. His behavior was affected by his audience. If you made him happy he gave you candy.”
Seema started to think that maybe they had something that went beyond a school project. The team was asked if Quasi could travel to NYC and conduct a press interview at an event: “Quasi wasn’t portable. He came back from events broken. So in the spring of 2005 we built Quasi #2; he was portable!”
One of the team members built software that enabled them to puppeteer the robot. The Guided Performance Interface (GPI) software allowed the operator to control much more than Quasi’s expression – they also controlled where he was looking, what he was saying, and how he moved. It was kind of an Oz behind the curtain, but it was wildly successful. 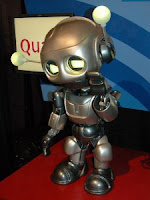 A few weeks later, a child interacted with Quasi for 20 minutes, about 15 minutes more than usual. That made Seema wonder if there wasn’t some commercial value in Quasi relating to children.
Startup.  By January 2006, with graduation and job offers looming, Seema decided to jump into entrepreneurship, figuring that she could find a market for her robot. Three others joined, all of whom were involved in the 13-member school project. Interbots transitioned from a project to a startup.
The team started out trying to create robots like Quasi but most of the business turned out to be events: “We did over 40 live performances. Kids came up to talk with him. We did that for several years, but that wasn’t a scalable business.” It was however, profitable.
Autism.  Several events had brought kids with autism spectrum disorder (ASD) in front of Quasi and Seema noticed that these kids responded to the robot. She recognized something powerful and therapeutic for ASD kids. But, at more than $50K to build, Quasi’s cost was an issue. Seema had a different thought, “What if we did a robotic toy?” Thus Popchilla was born. 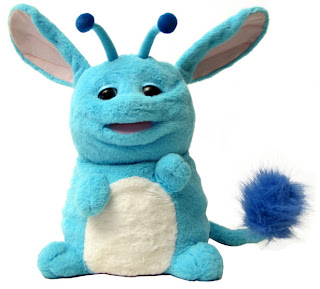 In 2008, Innovation Works, a regional economic development organization awarded Interbots a $25K grant to create a prototype, software, and a website so that kids could share stories with others. An additional $157K of funding came from The Technology Collaborative. The team outsourced manufacturing to China to get a commercial prototype. The company also received $40K seed funding from Idea Foundry, another economic development organization that supports companies at the earliest stages.

By 2010, Interbots had a toy targeting the ASD market and a goal of a mass manufactured bundle for $500. The Autism Center of Pittsburgh rallied with a Sprout Fund grant $13K to do a pilot study working with therapists and autistic kids. The study went very well. Results were positive. And Seema decided to focus on autism as a market entry point: “It’s not the biggest market [about $227M in the US], but it’s real and Popchilla serves a need. That will lead us somewhere, I am sure!”
About one in 100 children is diagnosed with ASD. That’s 400K children in the US alone. Seema’s goal is worldwide distribution to the ASD market. And that’s a sizable number.
Interbots today.  In the fall of 2011, Interbots took first place at the first national Robobowl competition, winning $25K. Seema would like to raise $1.5M to conduct additional user studies and do a real launch.
The product has come a long way. Interbots sells a bundled package: the robot, software, interactive website, and lesson plans for therapists and teachers.
All of the data is streamed directly to the robot. Everything that makes Popchilla move comes from the device, an iPad or smartphone. Seema tells me, “You don’t need to change the robot itself. That means that we can take the same robot used in the ASD market but target it to other special needs markets. Maybe eventually we can get to the general consumer robotics space.” Seema envisions Popchilla selling as a retail toy for under $150.
Challenges.  Commercializing robotics technologies presents unique challenges. It takes more money, time and perseverance than other technologies:
For Seema and Interbots it has been quite a journey. And it’s only just beginning! 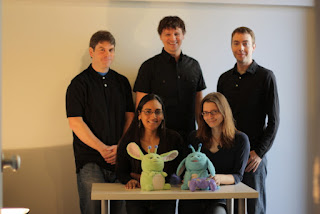