Swiss researchers invent system to spray wolf repellant, text shepherds when their sheep are under attack 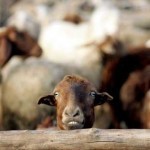 Swiss researchers have developed and successfully tested a collar that measures a sheep’s heartbeat. By integrating information from multiple sheep in the flock, the flock’s heartbeat was found to be significant enough to allow sending text messages to shepherds to inform them of the imminent attack on their herd. In addition, the collars could be equipped to spray wolf repellant.

The system is intended for owners of small stocks. Prototype testing is expected to commence in early 2013 in Switzerland and France.