Global land-use changes continue to be a major driver of biodiversity loss and greenhouse gas emissions. Remote sensing technology is increasingly used to assess changes in land use, species distributions and carbon stocks. However, satellite and airborne sensors can be prohibitively costly and inaccessible for researchers, or they may not have the required spatial resolution. Recently UAVs have been used by conservation researchers and practitioners across various parts of the world. These inexpensive UAVs typically cost less than $4000 US, and have been dubbed ‘Conservation Drones’. The drones are equipped with cameras to record videos at up to 1080 pixel resolution (high definition), and acquire aerial photographs of <2 cm pixel resolution. Aerial photographs can be stitched together to produce near real-time geo-referenced land use/cover maps of surveyed areas and 3D models.

This post is part of Robohub’s TED Global 2013 coverage. Serge Wich and Lian Pin Koh preparing a Conservation Drone for a demonstration mission for the French conservation group, HUTAN, near the Kinabatangan river in Borneo.

Why did we develop Conservation Drones?
Globally, biodiversity continues to decline, and a disproportional amount of this decline occurs in the tropics where the majority of global biodiversity is found. One urgent challenge for conservationists is to be able to accurately assess and monitor changes in forest cover, species distributions and population dynamics. To obtain such data, conservationists currently rely on satellite-based remote sensing for mapping and monitoring land use changes, and on ground surveys to determine and monitor species distribution and population dynamics. Although low-resolution satellite images are freely available at specific time intervals, it is often prohibitively expensive to obtain sub-meter resolution images. Yet, such high-resolution data are often critical for accurately detecting and tracking land use change at the landscape scale. Furthermore, large portions of the humid tropics are often obscured from remote sensing satellites due to persistent cloud cover. As such, cloud-free satellite images for a specific time period/series and location are often not readily available. An elephant detected during one of the drone missions in North Sumatra, Indonesia.

A second major conservation challenge concerns assessment and monitoring of biodiversity. Currently, this is largely achieved through ground surveys, which are often time-consuming, financially expensive, and logistically challenging in remote areas. As a result, surveys are not conducted at the frequency required to monitor population trends, and some remote tropical forests have never been surveyed for biodiversity due to difficult and inaccessible terrain.

An additional challenge for conservationists is the illegal encroachment into protected areas and illegal hunting of prized animals, such as tiger, rhinos, and elephants. The areas that need to be surveyed in these cases are large, and current ground and manned aircraft surveys do not occur regularly enough to be able to effectively reduce illegal activities.

To address these challenges, we are developing the use of inexpensive, autonomous unmanned aerial vehicles for surveying and mapping forests, biodiversity and potential illegal activities – Conservation Drones. Drone image of a forest in Cambodia.

What are Conservation Drones?
Although we have been using several airframes for our drones since we started, the core part of the system has remained the same. The core is an autopilot system (APM) developed by an online community (diydrones.com). By combining the APM with open-source mission planner software (APM Planner), we convert off-the-shelf model airplanes into drones. We use inexpensive airframes so that the technology can be accessible to conservation organizations and researchers, who often do not have the funding to acquire drones and maintain them.

We have equipped our drones with various camera systems for still-photography and videography. We have been mainly using the Canon SX230 with a build-in GPS so that all photos are geo-tagged. We replace the original firmware of the Canon camera with a Canon Hack Development Kit. This ‘hacked’ firmware allows us to implement a customized intervalometer script to command the camera to take photographs at user-specified time intervals (e.g., every 3 seconds). This script also allows the user to define several other parameters including: i) time-delay before the camera begins taking pictures, ii) focal length of camera lens, and iii) time before camera automatically shuts down and retracts its lens.

We also use video cameras such as the GoPro Hero and the ContourGPS. These take high definition videos at 1080 x 720 pixels. We attached these cameras underneath or on the side of the fuselage. Using the APM Planner, we program the flight path of each mission by clicking on waypoints in a Google satellite map interface. The drone can be programmed to take off and land autonomously, and circle over any waypoint for a specified number of turns or duration. Users could also program other flight parameters such as ground speed and altitude of each waypoint. A mosaic of drone images during a mission over an agricultural landscape in Sabah.

What have we achieved so far?
Since our start in January of this year we have made over 200 conservation drone flights in several countries including Switzerland, Netherlands, Indonesia, Malaysia and Nepal, Congo, Gabon, Madagascar, United States, and Greenland. These flights have provided us a large amount of photos and videos, which we have examined with respect to our three main initial goals. We describe these below.

Mapping land use
So far we have been able to take sets of high-resolution photos of various areas that can be stitched together into a geo-referenced mosaic so that it can be used in geographic information system software. Such mosaics give detailed information on type of land use, agriculture, and settlements. In addition, the images can be used to create three-dimensional models of the areas that were covered during missions due to the overlap between the photos. Such models can potentially be used to calculate a number of characteristics of different land uses such as tree height and tree density.

Biodiversity
The high-resolution nature of our images have also allowed us to detect various wildlife species on our photos or their signs including orangutans and their nests, elephants, rhinos, forest buffaloes, and even turtle nests. The next important step for our work is to derive the distribution and density of these wildlife species based on drone images so that this technique can become a standard application for conservation workers. To achieve this goal, we are collaborating with colleagues, including Prof. Dr. Andreas Krause at ETH Zurich to automate the detection of orangutan nests.

Illegal activities
For conservation workers, having access to up-to-date information on illegal logging in protected areas and poaching are extremely important. The video and photos taken from the drones can be used to detect such these illegal activities. For example, geo-tagged drone images of recently logged areas could help authorities track down illegal loggers and provide evidence for their conviction. When poachers are in a forest, they often create campfires for cooking or smoking the bush-meat from animals they have hunted. The detection of smoke rising above a forest would thus be very useful to locate these poachers. Conservation drones equipped with a high definition video camera could facilitate the detection of smoke many kilometers away. Furthermore, a ‘live’ video link would allow rangers to patrol the forest in real time, and react immediately when needed. Plans for the future
Conservation Drones is a constant work in progress. We are currently working with other colleagues to explore the use of our drones as a ‘data mule’. For example, drones equipped with a scanning radio receiver might be able to triangulate the location of forest animals that have been tagged with a radio collar. This would be a much more efficient way of locating these radio-collared animals than the traditional method of walking the forest on foot with a cumbersome radio antenna.

We are also working with WWF Nepal and India to equip drones with thermal imaging cameras. These camera systems would be able to detect heat emitting objects from the ground, which would help rangers locate both wildlife and poachers at night. 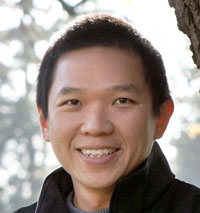 Lian Pin Koh is Assistant Professor of Applied Ecology and Conservation at the ETH Zürich.

Lian Pin Koh is Assistant Professor of Applied Ecology and Conservation at the ETH Zürich.