The beginning of something important: InTouch Health and iRobot’s RP-VITA

InTouch Health has installed their remote presence robots and portable devices in hospitals all over the world, and their devices are used more frequently year by year. In his keynote speech, Wang said they were in “500 hospitals and have 60,000 high acuity consults a year now, and growing at a nice clip.” This is up from 300 hospitals and 20,000 consults two years ago.

After the address I spent a few moments with Colin and asked him about iRobot’s role with InTouch and about their goals for their new mobility platform.

I saw and played with the new RP-VITA robots and they are truly slick. But the most enlightening thing I saw was four hours of tightly-packed presentations by critical care doctors and hospital administrators, all users of InTouch Health’s remote presence robots, and all portraying different aspects of why remote presence in health care is relevant, is saving lives and is necessary today and why it will continue to be in the future. 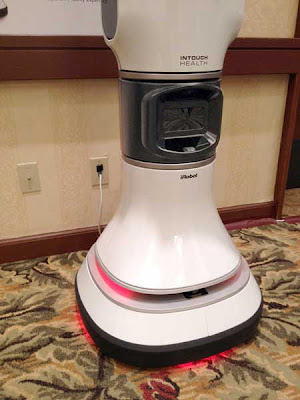 iRobot’s mobility platform is as slick, shiny and elegantly crafted as is the re-designed InTouch Health application station and “head” that is mounted atop it. Neatly encased in iRobot’s pedestal are three PrimeSense 3D sensors (two below and one above), four omni-directional Swedish wheels, an acoustic sensor, a laser sensor and iRobot’s Aware2 operating system. For the joint venture with InTouch, iRobot has provided an enhanced navigation system so that the device can quickly and autonomously move from point to point, rerouting as necessary for collision avoidance. This frees the health care professional from remotely driving the robot. [The autonomy feature is pending FDA approval which is expected in Q4.]
Also, the new RP-VITA specs contain a simple-to-use iPad interface for navigation and interaction with the patient and health care team. Thus, with the Aware2 operating system and software developer kit (SDK), and an iPad SDK both available to developers, thousands of developers can provide applications for a single, solid, proven platform.
Product engineering and appearance are always important considerations. Continued Colin, “When we test drove the RP-VITA without the skin, people thought it moved too fast and was unstable. But when we encased it and made it look as it does now, there were none of those complaints.”
Colin Angle stated that iRobot’s ultimate goal is to have a multi-purpose mobile robot in every home for every type of care and service. Thus, with this smooth-running new RP-VITA platform and the Aware2 SDK, iRobot is ready to take its know-how anywhere and everywhere. About the joint venture, Angle commented that “It was definitely the beginning of something important.”

Over the past 10 years, InTouch Health has been modifying it’s remote presence products to adapt to what health care professionals have needed. They gradually came to the conclusion that one methodology doesn’t fit all needs. Enabling a doctor to be in two places at once involves a whole series of products and systems. Currently they have three very capable solutions to those remote presence needs: a portable Xpress device for ambulances and remote locations unfriendly to mobile robots; a portable operating room station (Vantage and Lite); and the new mobile VITA robot. The swiveling wide-angle and zoom cameras and monitor and the two-way communication are integral parts of all of their products. The general purpose of each product is to easily perform real-time consults with patients and other physicians and health care providers through the use of secure interfaces supported by a speedy and secure network infrastructure.

As a pioneer in the field of health care telepresence, InTouch Health has had the unenviable task of keeping up with technological change while offering state-of-the-art remote presence robotic products. The release of this new RP-VITA robot and the partnership with iRobot, indicate how this new venture is paying off: the integration of new iPad apps integrated with the iRobot platform and an API making further clinical apps easily available, InTouch seems to have a viable forward plan.

However, competition is just around the corner. VGo Communication, Giraff Technologies and other telepresence robot companies are working with hospitals and municipalities to find uses their products can provide:

Certainly, the joint venture with iRobot has freed InTouch to focus more on what it does best and leave the driving to iRobot.