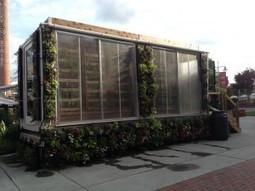 The Farmery hopes to provide an urban farmers market experience for the city and recently locked a Burt’s Bees sponsorship! Now a Mini-Farmery is open for biz!

Always looking for ways to automate plant producttion, this inspired me to imagine a spherical container, the top half made of some glazing material (glass, plexiglass, …), and the bottom half composed of rows of trays or racks for plants, potted or otherwise. In the center would be a sngle pivoting robotic arm. Supporting this structure would be a cylindrical collar, rising to where the glazing began, the bottom of which would be a tank containing enough water to serve as a thermal flywheel, and fish. The robotic arm would not need the precision of an industrial arm, partly because the machinery it supported could compensate for its imprecision, adjusting much faster than the arm swayed, and the entire structure could rotate around its vertical axis, to help even out the distribution of sunlight.