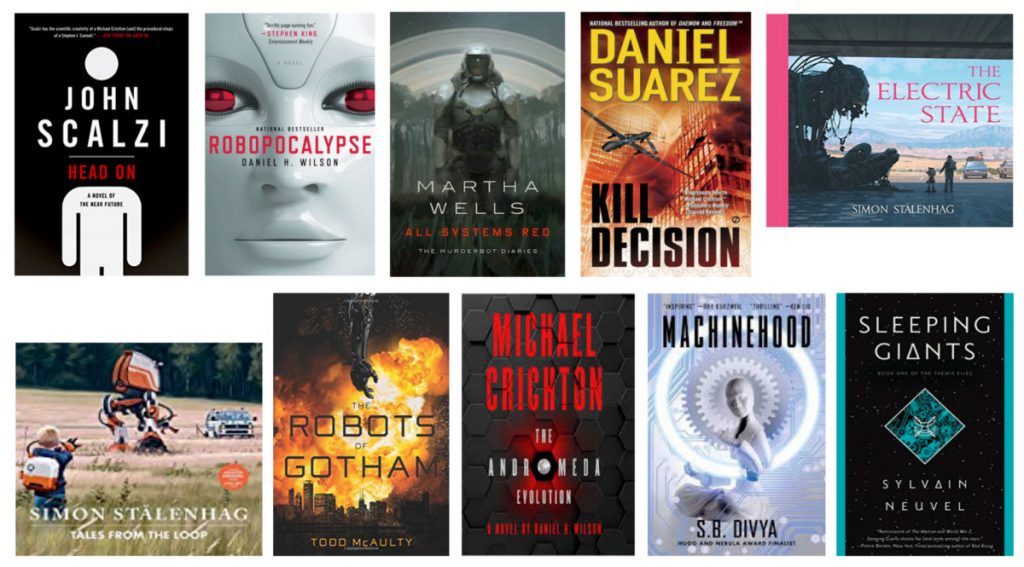 Sure the average video gamer is 34 years old, but the most active group is boys under 18, a group famously resistant to reading. Here is the RTSF Top 10 recommendations of books that have robots plus enough world building to rival Halo or Doom and lots of action or puzzles to solve. What’s even cooler is that you can cleverly use the “Topics” links to work in some STEM talking points by asking things like: do you think it would be easy reprogram cars to hit pedestrians instead of avoiding them? How would you fool a security drone? or Do you think robots should have the same rights as animals? But you may want to read them too, the first six on the list are books that I routinely recommend to general audiences and people tell me how much they loved them.

Head On – The rugby-like game in the book, Hilketa, played with real robots, is the best multiplayer game that never was. And paralyzed people have an advantage! (FYI: a PG-13 discussion of tele-sex through robots). Good for teachable moments about teleoperation.

The Murderbot Diaries (series)- Delightfully snarky point of view of a security robot trying to save clueless scientists from Aliens-like corpos and creatures. Good for teachable moments about software engineering and whether intelligence systems would need a governor to keep them in line.

The Electric State– This is sort of a graphic novel the way Hannah Gadsby is sort of a comedian- it transcends the genre. Neither the full page illustrations nor the accompanying text tell the whole story of the angry teenage girl and her robot trying to outrun the end of the world. Like an escape room, you have to put the text and images together to figure out what is going on. Good for teachable moments about autonomy.

Tales from the Loop– the graphic novels, two in the series, are different from the emo Amazon streaming series. The books are much more suited to a teenage audience who love world building and surprising twists. Good for teachable moments about bounded rationality.

Kill Decision– Scarily realistic description of killer drones, with cool Spec Ops guy who has two ravens with call out to Norse mythology. Good for teachable moments about swarms (aka multi-robot systems).

The Andromeda Evolution– Helps if they’ve seen or read the original Andromeda Strain movie, but it can be read as a stand-alone. This commissioned sequel is a worthy addition. Good for teachable moments about drones and teleoperation.

Machinehood – A pro-Robots Rights group is terrorizing the world, nice discussion of ethics amid a lot of action- no boring lectures. Good for teachable moments about robot ethics.

The Themis Files– A earnest girl finds an alien Pacific Rim robot and learns to use it to fight evil giant piloted mecha invaders while shadowy quasi-governmental figures try to uncover its origins. Good for teachable moments about exoskeletons.