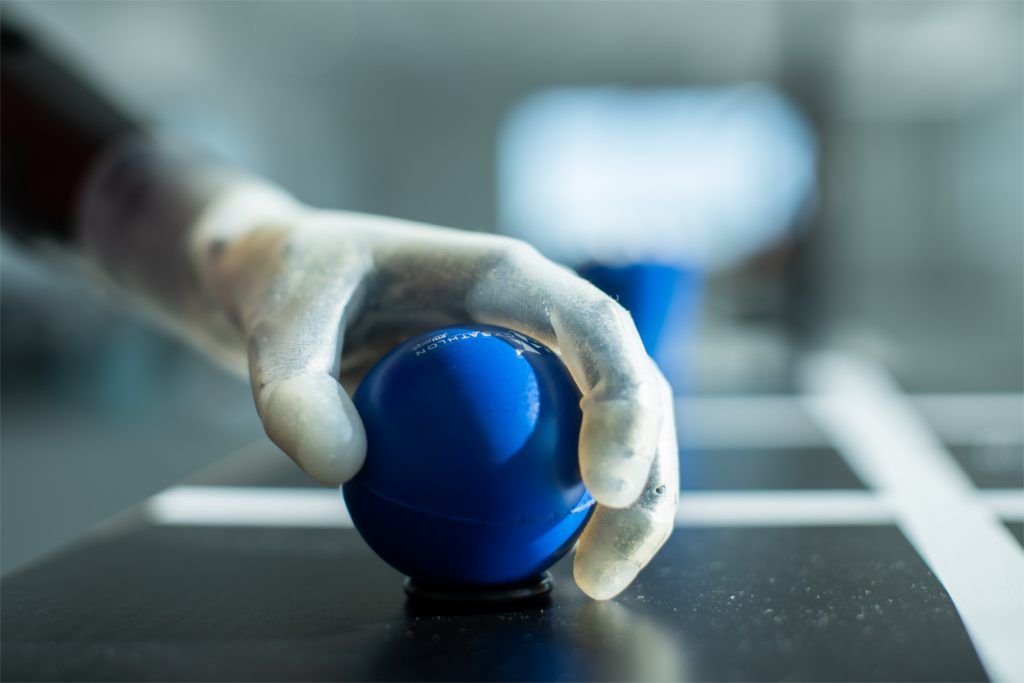 IIT’s teams will compete in the “Powered Arm Prosthesis” category showing two different robotic arm prostheses made in Italy: SoftHandPro and Hannes. The race course is about 30 metres long and will see the pilots compete in three races on 6 stations reproducing daily tasks. 60 teams from 23 countries will be involved in the event “remotely”, streamed on Cybathlon website starting from November 13th.

The IIT-Istituto Italiano di Tecnologia (Italian Institute of Technology) will participate in the Cybathlon Global Edition 2020, an international event organised by the Federal Institute of Technology (ETH) in Zurich, Switzerland, and dedicated to new prosthetic devices. People with physical disabilities from all over the world will compete, as pilots, in different disciplines that reproduce daily useful tasks, using the latest discoveries in technology such as robotic prostheses, exoskeletons and new generation wheelchairs. IIT will participate by presenting two robotic arm prostheses: the SoftHand Pro, stemming from a research project funded by the European Research Council (ERC), and the Hannes robotic hand developed together with the Italian Centro Protesi INAIL (the prosthetic unit of the National Institute for Insurance against Accidents at Work).

Cybathlon 2020 should have taken place in May at the Letzigrund Stadium in Zurich. However, this year for the first time, due to the current global health crisis, it will take place remotely in 23 countries around the world, from Genoa to Hong Kong, Cleveland to Paris and Melbourne to Tokyo. These countries will transmit their own races to the control center in Zurich where a single programming video will be created and streamed online on 13 November. The competition will be available on Cybathlon website.

The event aims to raise awareness among the general public on the needs of people living with a disability, and to showcase the state-of-the-art of technologies developed in this area also promoting collaboration between research centers.

IIT will vie with two made-in-Italy robotics solutions in the “Powered Arm Prosthesis” category, lining up two different teams: Rehab Tech and SoftHand Pro. The two teams belongs to different IIT research groups, both engaged in research on the movements of the human hand and robotics. They will face competition along the same race track prepared at the IIT’s Center for Human Technologies (CHT-IIT) based in Genova (Italy).

The two teams will use two independent devices that have a common history: they were created in IIT starting from the Pisa/IIT SoftHand robotic hand technology, initially developed for humanoid robots and supported by European Research Council (ERC)’s grant.

Rehab Tech team
This team will use the biomimetic prosthetic hand Hannes, developed in the joint laboratory IIT-INAIL Rehab Technologies Lab, a Class 1 CE product which this year was awarded the Compasso d’Oro Award for design, with the goal of reaching the market in the short-term. The pilot is Colian Rossi, a technical designer who had a work accident in 2015, causing him an arm amputation. He is now an INAIL patient. 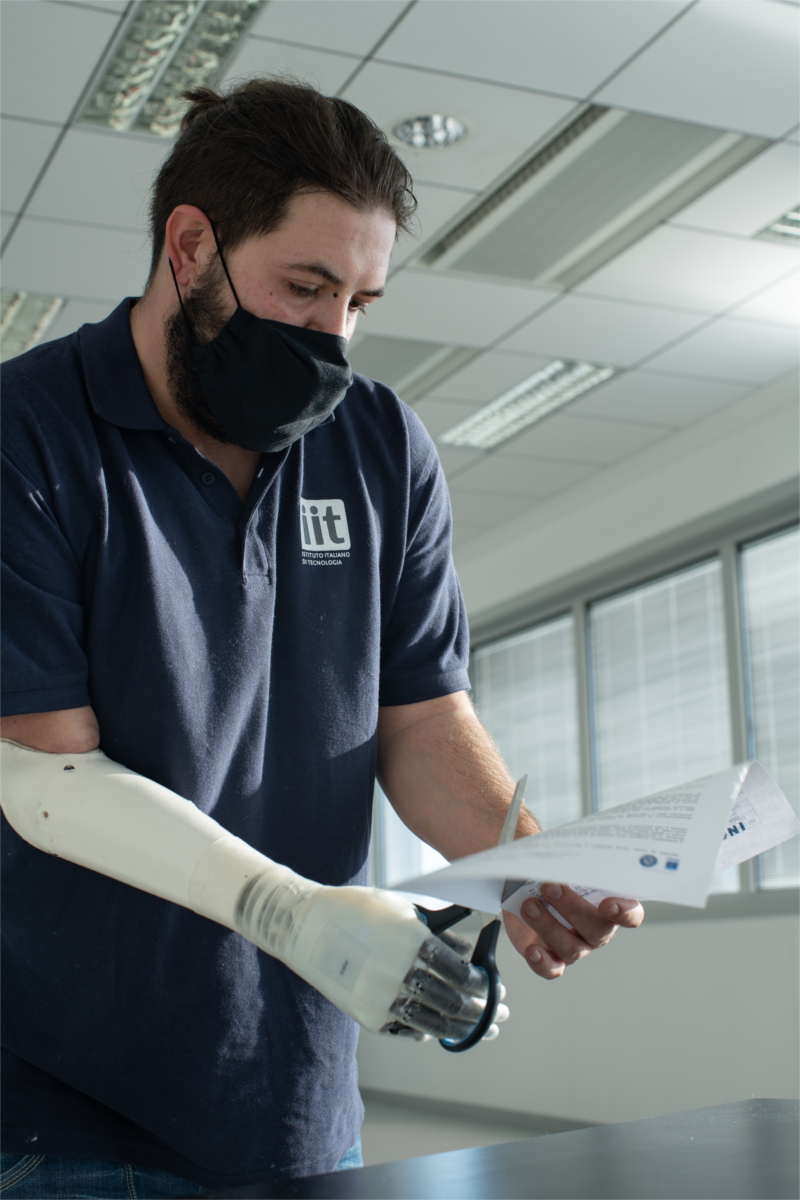 Colian Rossi from the Rehab Tech team during training

SoftHand Pro team
They will use the SoftHand Pro realized in the IIT’s Soft Robotics for Human Cooperation and Rehabilitation laboratory in collaboration with the University of Pisa. SoftHand Pro ensues from the ERC SoftHand project and it is now at the center of an ERC’s Synergy Grant (Natural Bionics) which, in future, aims to directly integrate the prosthesis with the subjects’ spinal circuits via neurosurgery. The pilot is Maria Fossati, industrial designer and IIT researcher, who constantly wears the prosthesis. 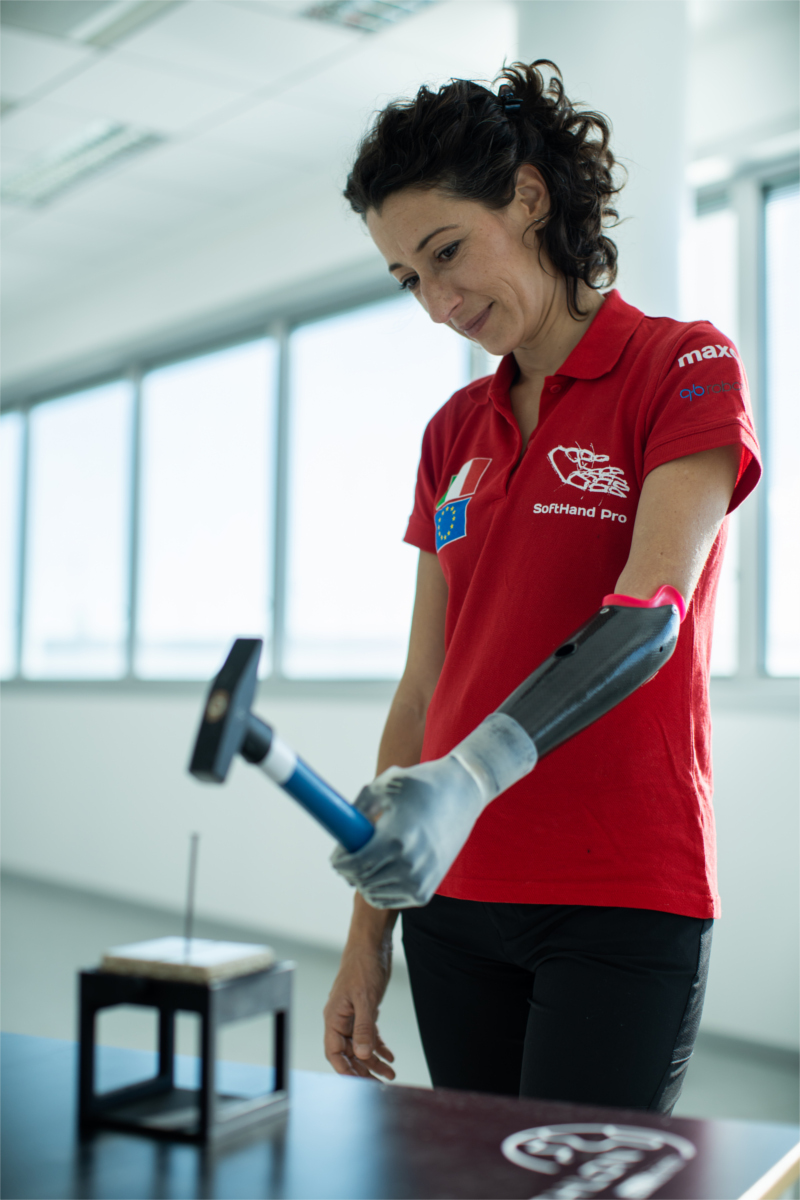 Maria Fossati from the SoftHand Pro team during training

Each team consists of a pilot and her/his entourage made up of researchers having the role of coaches, athletic trainers and real race mechanics, just as in motor racing competitions.

The race course for the “Powered Arm Prosthesis” category is about 30 metres long and will see the pilots compete in three races on six stations: preparing the table for breakfast, laundry, re-setting a table, using domestic tools (hammer, scissors, etc.), recognising shapes blindly and arranging glasses in the shape of a pyramid. The race will have a maximum duration of 8 minutes. The score is assigned on the basis of the number of completed tasks and the completion time.

Competing teams in this category are 14, from Italy, Sweden, India, South Africa, Russia, Croatia, Great Britain, China, Germany and Switzerland. Teams achieving the 4 best times in their discipline will receive an award on Saturday, 14 November.

Cybathlon 2020 will have a total of 60 teams divided into 6 race disciplines, identified by the pilot’s disability and technology in use. Besides the Power Arm Prosthesis category there is: The Powered Leg Prosthesis, the Powered Exoskeleton, the Powered Wheel Chair, the Brain Computer Interface and the Functional Electrical Stimulation Bike. The event will kick off at 3pm UTC. You can read more information about it in this post and on their website.