by The College of Engineering at Virginia Tech
06 February 2015 In fall 2014 in Mobile Bay, Alabama, Virginia Tech engineering students made history during a five-minute demo that placed an adult-sized humanoid robot with a hose in front of a live fire aboard a U.S. Navy ship.

The robot located the fire and sprayed water from the hose. Water blasted the flames.

The demo, four years in the making, is part of a new effort by the U.S. Navy to better assist sailors in fighting fires, controlling damage, and carrying out inspections aboard ships via user-controlled unmanned craft or humanoid robots. The firefighting robot is named SAFFiR, short for Shipboard Autonomous Firefighting Robot, and the U.S. Office of Naval Research envisions a future — long off, but tangible — in which every ship has a robot as a tool for firefighters.

Orekhov is one of 15 engineering students in the Terrestrial Robotics Engineering and Controls Lab (TREC) and the Extreme Environments, Robotics & Materials Laboratory (ExtReMe) who helped conceive, design, build, and test SAFFiR. SAFFiR is a bipedal 140-pound, 5-foot 10-inch humanoid robot that can walk, stretch and bend its legs, swivel its head, and hold and operate a hose with its hands. It has 33 degrees of freedom in movement. It can see in three formats: a standard stereo camera rig, lasers to provide precise ranges to obstacles, and stereo thermal imaging for range finding through smoke and detecting heat.

During a three-day demo in November 2014, students from the TREC and ExtReMe labs, along with faculty advisor Brian Lattimer, an associate professor with the Department of Mechanical Engineering, prepped SAFFiR for a fire suppression test onboard the former USS Shadwell, a decommissioned ship in Mobile, Alabama, now used as a damage control research center to test new shipboard firefighting techniques.

Along a slim, low-hung hallway, SAFFiR was tasked — programmed by the two labs’ imaging and manipulation team — to walk toward a sailor, stop, turn, locate the heat source of a fire behind a door, and (once the door opened) take a hose and blast the flames with water, all without falling or stopping. SAFFiR blasts water from a hose at a fire on the former USS Shadwell. U.S. Navy personnel from the ship surround the robot. Source: Virginia Tech.

The robot passed the test to the cheers of students and Navy personnel. “And that is that. Nicely done,” John Seminatore of Irvington, New York, a master’s student in mechanical engineering, said at the demo’s conclusion.

Students spent many hours aboard the ship prepping for the demo and hundreds of hours before that in their Goodwin Hall lab designing, fabricating, and testing SAFFiR. Unlike movies with CGI gimmickry to make robots appear to move, getting a real robot to walk upright is a challenge.

The Shadwell created extra obstacles: Heat from previous test fires has buckled its floors. In the hallway where SAFFiR walked, the floor slanted away from the path the robot has to take.

SAFFiR is, of course, a prototype, and the day of robot firefighters is long off. It is user-operated now, but long-range plans are for the robot to operate autonomously. Even with added intelligence to SAFFiR, it will take remote instruction from sailors and firefighters with safety as key.

“These robots can work closely with human firefighters without firefighters being directly exposed to steam or heat, fire and smoke,” Thomas McKenna, a program manager with the Office of Naval Research, said at the demo. Robots may one day patrol ships, he said, scanning for unnatural heat, smoke, or other issues and providing a “constant watch” against onboard dangers not detected by sailors.

The robot’s presence will be welcome. “Have you ever been on a ship that’s on fire? It’s terrifying,” said Dominique Pineiro, a Navy veteran on the Shadwell during the demo. “That’s a fact.”

SAFFiR team members and the Navy unveiled the robot Feb. 4, 2015, to media and the public at the Naval Future Force Science & Technology EXPO in Washington, D.C.

Future incarnations of SAFFiR already are planned with the Navy, according to Lattimer, with upgrades including improved movement. Funding from the Navy stands at $4.5 million and could increase as the project continues.

Days before the Expo, Seminatore — the SAFFiR student project manager at TREC — looked back on the demo of SAFFiR with relief and pride.

“We have demonstrated a real world application for humanoid robots that no one has done before,” said Seminatore, an Air Force veteran. “Manipulating an empty hose or walking down a hallway is very different than operating in a heat-warped soot filled corridor dragging a hose filled with water. It was a tense month leading up to the demo, we had never seen where we were testing, never used a real hose, never actually sprayed water. … The team did great and the robot performed like a champ.” 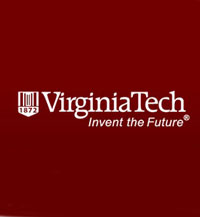 The College of Engineering at Virginia Tech is internationally recognized for its excellence in 14 engineering disciplines and computer science.

The College of Engineering at Virginia Tech is internationally recognized for its excellence in 14 engineering disciplines and computer science.