What can we learn from insects on a treadmill with virtual reality? When you think of a treadmill, what comes to your mind?

Perhaps the images of a person burning calories, or maybe the treadmill fail videos online. But almost certainly not a miniature treadmill for insects, and particularly not as a tool for understanding fundamental biology and its applications to technology.

Researchers have been studying insects walking on a treadmill.

Traditional methods for investigating an insect’s biology include observing them in their natural habitat or in the lab, and manipulating the animal or its surroundings. While this is sufficient for some research questions, it has its limitations. It is challenging to study certain behaviours like flight and navigation as it is difficult to manipulate insects in motion.  Scientists have been using the simple concept of a treadmill to address this. (1, 2). When insects fly or navigate, they typically use visual cues from their surroundings. So a screen with images/videos projected on it can be used to study how the insects behave with such cues. Alternatively, a virtuality reality setup added to the treadmill can help in manipulating the cues in real-time.

How do you make a treadmill for insects?

A miniature insect treadmill is a light-weight hollow Styrofoam ball suspended on an airflow. An ant, bee or a fly is tethered using a dental floss or a metal wire and placed on the top of the ball. Motion of the ball as the insect walks on it is recorded by two optical sensors similar to the one you find in a desktop mouse. This setup can be used as is outdoors, or with stationary images projected on a screen, or with a virtual reality screen instead. For virtual reality, as the ant walks on the ball, the sensors record the movement of the ball to extract the fictive movement of the insect in two dimensional space. This information is then transmitted to a computer which creates corresponding movement in the images/video on the virtual reality screen. For ants, this is almost as if they are walking and experiencing the change in the surroundings in real-time.

What can you learn from this about the insects?

Scientists have been able to learn about how visual cues influence flight and navigation in bees and ants by projecting them on a screen while tethered insects walk on a treadmill. Neural responses in different parts of their brain can also be recorded while the tethered insects are performing different behaviour. Such experiments can inform us about how they learn and remember different visual cues.

Do they show naturalistic behaviour on the treadmill?

At least in some ants like Cataglyphis fortis, the behaviours on the treadmill are similar to natural behaviour. However, the treadmill setup is still not free of shortcomings.

For example, restricting the movement of a flying insect like bees or flies tethered over the treadmill can affect their sensorymotor experience. Insect brains are evolved such that certain sensory feedback is required to elicit motor actions (behaviour). Flying on the treadmill might not feel the same for the insects. But recent technology has made it possible to use the virtual reality in real time for freely moving insects (and also mice and fish). High speed cameras can now record the 3D position of a freely flying insect, and transmit that to a computer which updates the visuals on the screen accordingly. The whole setup looks as if the insects are in a computer game.

On the other hand, this setup cannot be used to study depth perception or 3D vision (stereopsis) in insects like praying mantises as the projections on the screen are two dimensional. Luckily, researchers at Newcastle University (link) have found another ingenious way — 3D movie glasses! They cut out mantis-eye-sized glasses out of an ordinary human 3D glasses and attach them to the mantis eyes using beeswax. The visuals on the screen can now be similar to any 3D movie. This technique can potentially help to build simpler 3D vision systems for robots.

Another challenge with the treadmill setup include not being able to re-create different kinds of sensory information that they experience in nature. This may also be achieved in future.

What are the applications of this fundamental research?

The treadmill with virtual reality setup is an example of how technology can advance science, and how fundamental biological research in turn can inspire technology.  Since insects have simpler nervous and sensory systems than humans, they are easier to mimic. While the latest technology has helped uncover biological secrets of insects, that in turn can be an inspiration for bio-robots.

Take for example, the Moth robots. Moths use chemicals (pheromones) to communicate. So moths on a treadmill can navigate towards the smell. The motion of the treadmill as the tethered moth walks towards the smell can drive a small robot. Using the insect pilot in the cockpit of a robot, one could locate necessary odour signals in areas humans cannot reach.

Ants navigating on the treadmill can also inspire visually navigating robots and driverless cars (link). This can have applications ranging from disaster management to extra-terrestrial navigation. Perhaps in the future, ants-sized robots could visually navigate and search for the victims stuck under rubble after a devastating earthquake.

So the simple concept of a treadmill and the latest virtual reality can help biological research and inspire technology in different ways. What might be next, an insect gym? 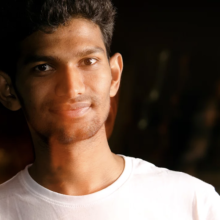 Ravindra Palavalli Nettimi is a PhD student in the Ecological Neuroscience group at Macquarie University, Sydney.

Ravindra Palavalli Nettimi is a PhD student in the Ecological Neuroscience group at Macquarie University, Sydney.