A crisis of expectations

At the first UK Robot Ethics workshop on 25th March 2013, I offered — for discussion — the proposition that robotics is facing a Crisis of Expectations. And not for the first time. I argue that one possible consequence is (another) AI winter. Public Expectations
Here’s a simple experiment. Ask a non-roboticist to give you an example of a robot — the first that comes into their mind. The odds are that it will be a robot from a Science Fiction movie: perhaps Terminator, R2-D2 or C-3PO or Data from Star Trek. Then ask them to name a real-world robot. Unlike your first question, which they will have answered quickly, this one generally needs a little longer. You might get an answer like “the robot in the advert that spray-paints cars” or, if you’re lucky, they might know someone with a robot vacuum cleaner. So, although most people have a general idea that there are robots in factories, or helping soldiers to defuse bombs, the robots that they are most familiar with – the ones they can name and describe – are fictional.

None of this is surprising. The modern idea of a robot was, after all, conceived in Science Fiction. Czech playwright K. Capek first used the word Robot to describe a humanoid automaton in his play Rossum’s Universal Robots (RUR) and Isaac Asimov was the first to coin the word Robotics, in his famous short stories of the 1940s. The idea of a robot as an artificial mechanical person has become a ubiquitous fictional trope, and robots have, for half a century, been firmly rooted in our cultural landscape. We even talk about people acting robotically and, curiously, we don’t mean like servants, we mean in a fashion that mimics the archetypal robot: stiff jointed and emotionally expressionless.

We even talk about people acting robotically and, curiously, we don’t mean like servants, we mean in a fashion that mimics the archetypal robot: stiff jointed and emotionally expressionless.

Furthermore, people like robots, as anyone who has had the pleasure of giving public talks will know. People like robots because robots are, to paraphrase W. Grey Walter, An Imitation of Life. Which probably accounts for the observation that we are all, it seems, both fascinated and disturbed by robots in equal measure. I have often been asked the question “how intelligent are intelligent robots?”, but there’s always an unspoken rider “… and should we be worried?”. Robot dystopias, from Terminator, to The Matrix or out-of-control AI like HAL in Kubrick’s 2001, make compelling entertainment but undoubtedly feed the dark side of our cultural love affair with robots.

It is not surprising then, that most people’s expectations about robots are wrong. Their beliefs about what real-world robots do now are hazy, and their expectations about what robots might be like in the near future often spectacularly over optimistic. Some think that real-world robots are just like movie robots. Others are disappointed and feel that robotics has failed to deliver the promises of the 1960s. This expectation gap — the gap between what people think robots are capable of and what they’re really capable of — is not one-dimensional and is, I argue, a problem for the robotics community. It is a problem that can manifest itself directly when, for instance, public attitudes towards robots are surveyed and the results used to inform policy [1]. It makes our work as roboticists harder, because many people think that the hard problems we are working on are already solved, and because it creates societal expectations of robotics that cannot be met. And it is a problem because it underpins the next expectation gap I will describe.

Press and Media Expectations
You are technically literate, an engineer or scientist perhaps with a particular interest in robotics, but you’ve been stranded on a desert island for the past 30 years. Rescued and returned to civilisation you are keen to find out how far robotics science and technology has advanced and, rejoicing in the marvellous inventions of the Internet and its search engines, you scour the science press for robot news. Scanning the headlines you are thrilled to discover that robots are alive, and sending messages from space; robots can think or are “capable of human reasoning or learning”; robots have feelings, relate to humans, or demonstrate love, even behave ethically. Truly robots have achieved their promised potential.

Then of course you start to dig deeper and read the science behind these stories. The truth dawns. Although the robotics you are reading about is significant work, done by very good people, the fact is — you begin to realise — that now, in 2013, robots cannot properly be said to think, feel, empathise, love or be moral agents; and certainly no robot is, in any meaningful sense, alive or sentient. Of course your disappointment is tempered by the discovery that astonishing strides have nevertheless been made. 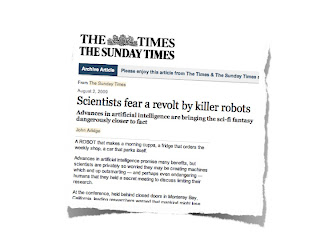 So, robotics is subject to journalistic hype. In this respect robotics is not unique. Ben Goldacre has done much to expose bad science reporting, especially in medicine. But a robot is different to, say, a new strain of MRSA because — as I outlined above — most people think they know what a robot is. Goldacre has characterised bad science stories as falling into three categories: wacky stories, scare stories and breakthrough stories [2]. My observation is that robots in the press most often headline as either wacky or scary, even when the development is highly innovative.

I believe that robohype is a serious problem and an issue that the robotics community should worry about. The problem is this: most people who read the press reports are lay readers who — perfectly reasonably — will not read much beyond the headline; certainly few will look for the source research. So every time a piece of robohype appears (pretty much every day) the level of mass-delusion about what robots do increases a bit more, and the expectation gap ratchets a little wider. Remember that the expectation gap is already wide. We are at the same time fascinated and fearful of robots, and this fascination feeds the hype because we want (or dread) the robofiction to become true. Which is of course one of the reasons for the hype in the first place.

Who’s to blame for the robohype? Well, we roboticists must share the blame. When we describe our robots and what they do we use anthropocentric words, especially when trying to explain our work to people outside the robotics community. Within the robotics and AI community we all understand that when we talk about an intelligent robot, what we mean is a robot that behaves as if it were intelligent; ‘intelligent robot’ is just a convenient shorthand. So when we talk to journalists, we should not be too surprised when “this robot behaves, in some limited sense, as if it has feelings” gets reported as “this robot has feelings”. But science journalists must, I think, also do better than this.

Funder and Stakeholder Expectations
Many of us rely on research grants to fund our work and — whether we like it or not — we have to become expert in the discipline of grantology. We pore over the small print of funding calls and craft our proposals with infinite care in an effort to persuade reviewers (also skilled grantologists) to award the coveted ‘outstanding’ scores. We are competing for a share of a limited resource, and the most persuasive proposals — the most adventurous, which also promise the greatest impact while matching themes defined to be of national importance — tend to succeed. Of course all of this is more or less equally true whether you are bidding for a grant in history, microbiology or robotics. But the crisis of expectations makes robotics different.

There are, I think, three factors at work. The first is the societal and cultural context — the expectation gaps I have outlined above. The second is the arguably disgraceful lack of useful and widely accepted benchmarks in robotics, which means that it is perfectly possible to spend 3 years developing a new robot which is impossible to quantifiably demonstrate as superior to comparable robots, including those that already existed when that project started. And the third is the fact that policymakers, funders and stakeholders are themselves under pressure to deliver solutions to very serious societal or economic challenges and therefore perhaps too eager to buy into the promise of robotics. Whether naively or wittingly, we roboticists are I believe guilty of exploiting these three factors when we write our grant applications.

I believe we now find ourselves in an environment in which it is now almost de rigueur to over-promise when writing grant applications. Only the bravest proposal writer will be brutally honest about the extreme difficulty of making significant progress in, for instance, robot cognition and admit that even a successful project, which incrementally extends the state of the art, may have only modest impact. Of course I am not suggesting that all grants over promise and under deliver, but I contend that many do and – because of the factors I have set out – they are rarely called to account. Clearly the danger is that sooner or later funding bodies will react by closing down robotics research initiatives and we will enter a new cycle of AI Winter.

Clearly the danger is that sooner or later funding bodies will react by closing down robotics research initiatives and we will enter a new cycle of AI Winter.

AI has experienced “several cycles of hype, followed by disappointment and criticism, followed by funding cuts, followed by renewed interest years or decades later” [3]. The most serious AI Winter in the UK was triggered by the Lighthill Report [4] which led to a more or less complete cancellation of AI research in 1974. Are we heading for a robotics winter? Perhaps not. One positive sign is the identification of Robotics and Autonomous Systems as one of eight technologies of strategic importance to the UK [5]. Another is the apparent health of robotics funding in the EU and, in particular, Horizon 2020. But a funding winter is only the most extreme consequence of the culture of over-promising I have outlined here.

Discussion
I want to conclude this talk with some thoughts on how we, as a community, should respond to the crisis of expectations. And respond we must. We have, I believe, an ethical duty to the society we serve, as well as to ourselves, to take steps to counter the expectation gaps that I have outlined. Those steps might include:

[5] George Osborne. Speech by the Chancellor of the Exchequer to the Royal Society, 9 November 2012.