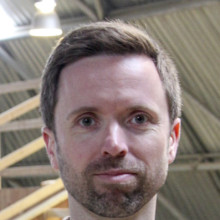 Dr. Timothy Barfoot (Professor, University of Toronto Institute for Aerospace Studies -- UTIAS) holds the Canada Research Chair (Tier II) in Autonomous Space Robotics and works in the area of guidance, navigation, and control of mobile robots for space and terrestrial applications. He is interested in developing methods to allow mobile robots to operate over long periods of time in large-scale, unstructured, three-dimensional environments, using rich onboard sensing (e.g., cameras and laser rangefinders) and computation. Dr. Barfoot took up his position at UTIAS in May 2007, after spending four years at MDA Space Missions, where he developed autonomous vehicle navigation technologies for both planetary rovers and terrestrial applications such as underground mining. He is an Ontario Early Researcher Awardholder and a licensed Professional Engineer in the Province of Ontario. He sits on the editorial boards of the International Journal of Robotics Research and the Journal of Field Robotics. He is currently serving as the General Chair of Field and Service Robotics (FSR) 2015, which will be held in Toronto.


›   Driving, flying, and climbing in a sand and gravel pit

›   Field and service robotics: The rubber meets the road at FSR in Toronto this June