BirdBot is energy-efficient thanks to nature as a model 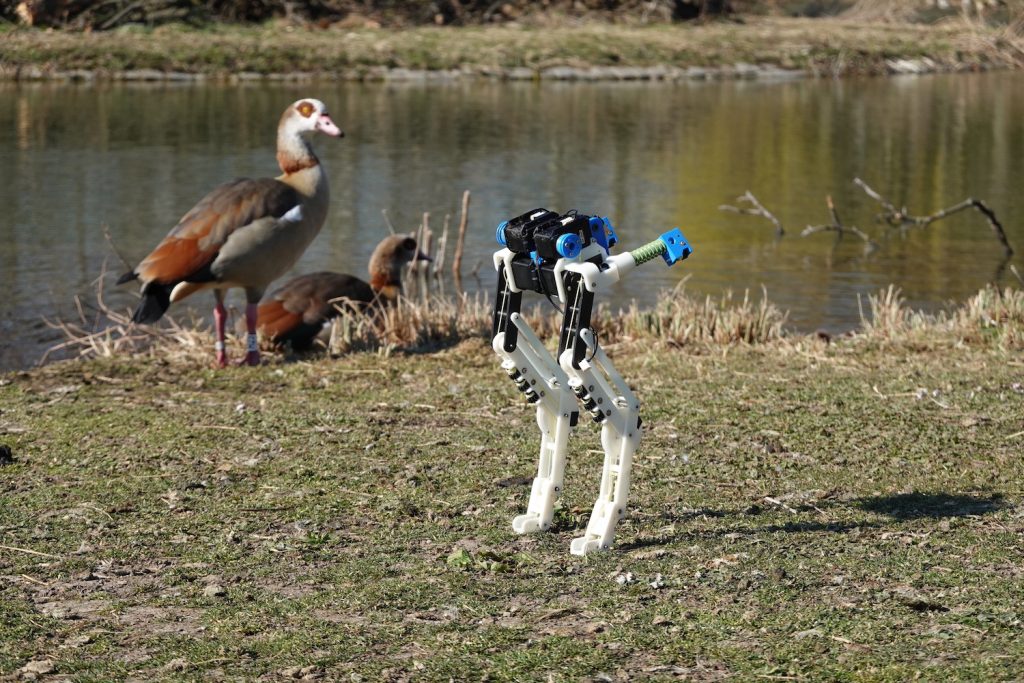 If a Tyrannosaurus Rex living 66 million years ago featured a similar leg structure as an ostrich running in the savanna today, then we can assume bird legs stood the test of time – a good example of evolutionary selection.

Graceful, elegant, powerful – flightless birds like the ostrich are a mechanical wonder. Ostriches, some of which weigh over 100kg, run through the savanna at up to 55km/h. The ostrich’s outstanding locomotor performance is thought to be enabled by the animal’s leg structure. Unlike humans, birds fold their feet back when pulling their legs up towards their bodies. Why do the animals do this? Why is this foot movement pattern energy-efficient for walking and running? And can the bird’s leg structure with all its bones, muscles, and tendons be transferred to walking robots?

Alexander Badri-Spröwitz has spent more than five years on these questions. At the Max Planck Institute for Intelligent Systems (MPI-IS), he leads the Dynamic Locomotion Group. His team works at the interface between biology and robotics in the field of biomechanics and neurocontrol. The dynamic locomotion of animals and robots is the group’s main focus.

Together with his doctoral student Alborz Aghamaleki Sarvestani, Badri-Spröwitz has constructed a robot leg that, like its natural model, is energy-efficient: BirdBot needs fewer motors than other machines and could, theoretically, scale to large size. On March 16th, Badri-Spröwitz, Aghamaleki Sarvestani, the roboticist Metin Sitti, a director at MPI-IS, and biology professor Monica A. Daley of the University of California, Irvine, published their research in the renowned journal Science Robotics.

Compliant spring-tendon network made of muscles and tendons

When walking, humans pull their feet up and bend their knees, but feet and toes point forward almost unchanged. It is known that Birds are different — in the swing phase, they fold their feet backward. But what is the function of this motion? Badri-Spröwitz and his team attribute this movement to a mechanical coupling. “It’s not the nervous system, it’s not electrical impulses, it’s not muscle activity,” Badri-Spröwitz explains. “We hypothesized a new function of the foot-leg coupling through a network of muscles and tendons that extends across multiple joints”. These multi-joint muscle-tendon coordinate foot folding in the swing phase. In our robot, we have implemented the coupled mechanics in the leg and foot, which enables energy-efficient and robust robot walking. Our results demonstrating this mechanism in a robot lead us to believe that similar efficiency benefits also hold true for birds,” he explains. 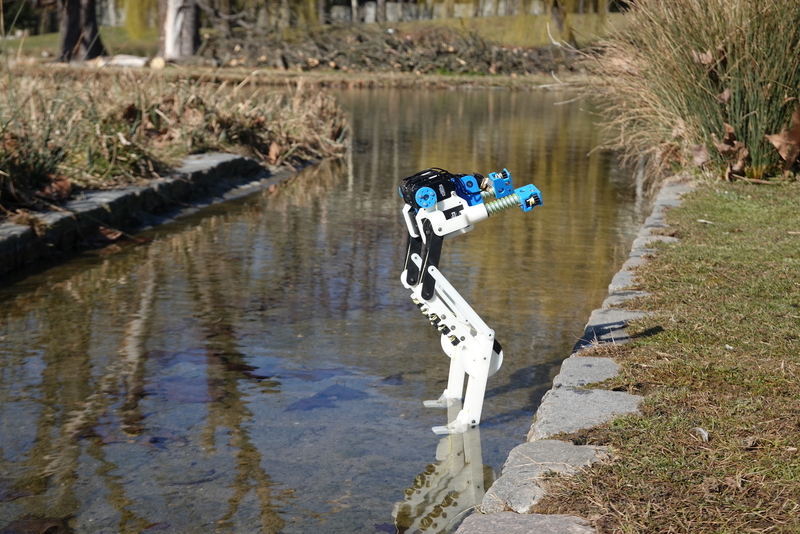 The coupling of the leg and foot joints and the forces and movements involved could be the reason why a large animal like an ostrich can not only run fast but also stand without tiring, the researchers speculate. A person weighing over 100kg can also stand well and for a long time, but only with the knees ‘locked’ in an extended position. If the person were to squat slightly, it becomes strenuous after a few minutes. The bird, however, does not seem to mind its bent leg structure; many birds even stand upright while sleeping. A robotic bird’s leg should be able to do the same: no motor power should be needed to keep the structure standing upright.

To test their hypothesis, the researchers built a robotic leg modeled after the leg of a flightless bird. They constructed their artificial bird leg so that its foot features no motor, but instead a joint equipped with a spring and cable mechanism. The foot is mechanically coupled to the rest of the leg’s joints through cables and pulleys. Each leg contains only two motors— the hip joints motor, which swings the leg back and forth, and a small motor that flexes the knee joint to pull the leg up. After assembly, the researchers walked BirdBot on a treadmill to observe the robot’s foot folding and unfolding. “The foot and leg joints don’t need actuation in the stance phase,” says Aghamaleki Sarvestani. “Springs power these joints, and the multi-joint spring-tendon mechanism coordinates joint movements. When the leg is pulled into swing phase, the foot disengages the leg’s spring – or the muscle-tendon spring, as we believe it happens in animals,” Badri-Spröwitz adds. A video shows BirdBot walking in the research group’s laboratory. 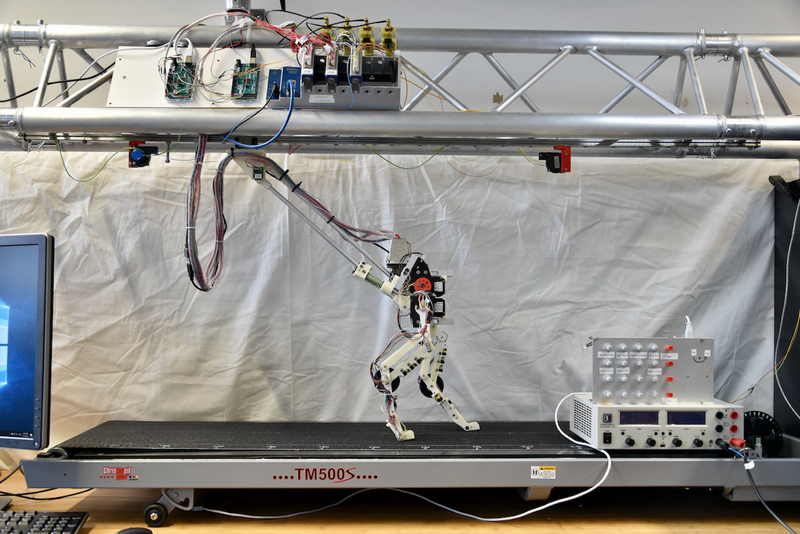 Zero effort when standing, and when flexing the leg and knee

When standing, the leg expends zero energy. “Previously, our robots had to work against the spring or with a motor either when standing or when pulling the leg up, to prevent the leg from colliding with the ground during leg swing. This energy input is not necessary in BirdBot’s legs,” says Badri-Spröwitz and Aghamaleki Sarvestani adds: “Overall, the new robot requires a mere quarter of the energy of its predecessor.”

The treadmill is now switched back on, the robot starts running, and with each leg swing, the foot disengages the leg’s spring. To disengage, the large foot movement slacks the cable and the remaining leg joints swing loosely. This transition of states, between standing and leg swing, is provided in most robots by a motor at the joint. And a sensor sends a signal to a controller, which turns the robot’s motors on and off. “Previously, motors were switched depending on whether the leg was in the swing or stance phase. Now the foot takes over this function in the walking machine, mechanically switching between stance and swing. We only need one motor at the hip joint and one motor to bend the knee in the swing phase. We leave leg spring engagement and disengagement to the bird-inspired mechanics. This is robust, fast, and energy-efficient,” says Badri-Spröwitz. 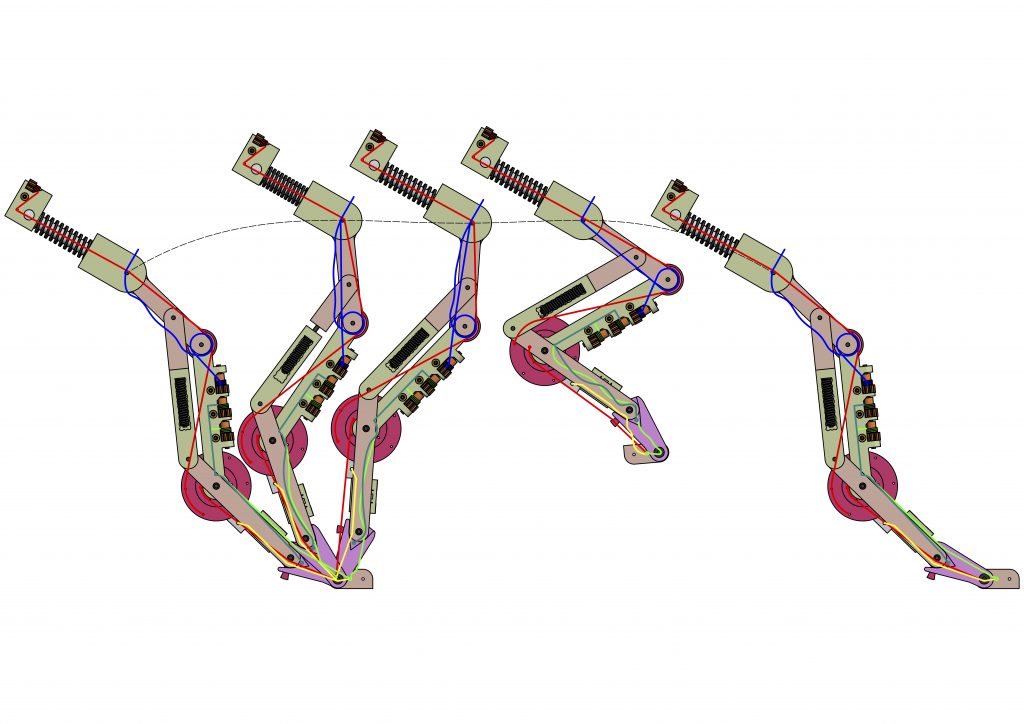 Motion sequence of BirdBot’s leg; left is touch-down, then stance (the three first snapshots on the left), then mid-swing with the leg’s characteristic leg flexing posture, and back to touch-down on the right. Springs and spring-tendons are shown on top.

Monica Daley observed in several of her earlier biology studies that the bird’s leg structure not only saves energy during walking and standing but is also adapted by nature so that the animal hardly stumbles and injures itself. In experiments with guineafowls running over hidden potholes, she quantified the birds’ remarkable locomotion robustness. A morphological intelligence is built into the system that allows the animal to act quickly – without having to think about it. Daley had shown that the animals control their legs during locomotion not only with the help of the nervous system. If an obstacle unexpectedly lies in the way, it is not always the animal’s sense of touch or sight that comes into play.

“The structure with its multi-jointed muscle-tendons and its unique foot movement can explain why even heavy, large birds run so quickly, robustly, and energy-efficient. If I assume that everything in the bird is based on sensing and action, and the animal steps onto an unexpected obstacle, the animal might not be able to react quickly enough. Perception and sensing, even the transmission of the stimuli, and the reaction cost time,” Daley says.

Yet Daley’s work on running birds over 20 years demonstrates that birds respond more rapidly than the nervous system allows, indicating mechanical contributions to control. Now that the team developed BirdBot, which is a physical model that directly demonstrates how these mechanisms work, it all makes more sense: the leg switches mechanically if there is a bump in the ground. The switch happens immediately and without time delay. Like birds, the robot features high locomotion robustness.

Whether it’s on the scale of a Tyrannosaurus Rex or a small quail, or a small or large robotic leg. Theoretically, meter-high legs can now be implemented to carry robots with the weight of several tons, that walk around with little power input.

The knowledge gained through BirdBot developed at the Dynamic Locomotion Group and the University of California, Irvine, leads to new insights about animals, which are adapted by evolution. Robots allow testing and sometimes confirming hypotheses from Biology, and advancing both fields. 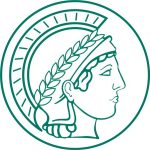 Max Planck Institute for Intelligent Systems 's goal is to investigate and understand the organizing principles of intelligent systems and the underlying perception-action-learning loop.

Max Planck Institute for Intelligent Systems 's goal is to investigate and understand the organizing principles of intelligent systems and the underlying perception-action-learning loop.