The China International Robot Show CIROS was held July 2-5 in Shanghai. 30,000 people were expected to attend and 56 companies exhibited. Although most of the exhibitors were Taiwanese, Japanese, Korean, German and other international robot vendors and their Chinese integrators, there were many new Chinese robot makers as well. 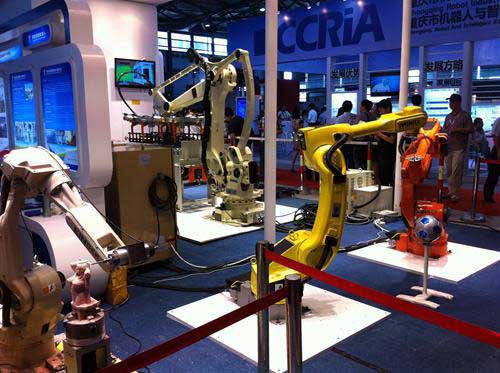 View from the exhibition floor at CIROS, July 2-5, Shanghai.

The International Federation of Robotics (IFR) hasn’t counted robots manufactured in China because the IFR is dependent on country robot associations for their data and up until this year there hasn’t been such an association in China. The new China Robot Industry Alliance (CRIA) was recently established to enable China’s new robot makers to have a lobbying presence within China and a statistical presence with the IFR. 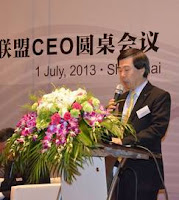 According to the IFR’s President Dr. Shinsuke Sakakibara at a press conference preceding CIROS, China is forecast to exceed Japan and the USA as the largest market for robots, particularly when in-country manufactured robots are included in the tally, sometime in 2014.

But Ilian Bonev, an Associate Professor in Robotics at the École de technology supérieure in Montreal, Canada, in a recent post, suggests that China probably already has become the largest user of industrial robots in the world. Citing data from the IFR which showed that 23,000 robots were sold into China in 2012, Bonev added 9,800 robots manufactured by six major Chinese vendors giving a total of 32,800 – 4,000 greater than the 28,700 sold into Japan in 2012. Hence his claim that China has already become the largest buyer of robots.

And this doesn’t include Foxconn’s Foxbots – the robots produced in Taiwan for Foxconn’s factories in mainland China. Foxconn already has 20,000 robots at work in it’s factories according to CEO Terry Gou. Yet these are not reported by the IFR because Foxconn isn’t a member of the Taiwanese Robot Association (TAIROA) nor are they reported as a Chinese manufacturer or a member of the new CRIA.

About 70% of the total number of robots produced in 2012 went to Japan, China, the US, Korea and Germany. Sales to Japan rose slightly to 28,700 units and 22,400 for the U.S. Between 2005 and 2012, sales of industrial robots into China increased by about 25% on average per year. Based on an IFR chart, welding is the main use of those robots followed by handling, assembly, dispensing and cleanroom robotics.

Robot density as a predictor of future demand

The IFR attempts to measure robot density, i.e., the number of robots used per 10,000 persons employed in the manufacturing/automotive industry. South Korea’s measure is 347, Japan is 339, Germany is 261 while China is 10. The implication is that there is much room to grow in those countries with low density figures. The USA, with a density rating of 130, can also foresee growth in the purchase and deployment of robots.

China’s National Development and Reform Commission and Ministry of Science and Technology, will soon publish guidelines for the development of their industrial robotics industry. The “guidelines will include plans for the development of the industry, with market oriented enterprises being the mainstay. Strategies will center on breakthroughs in key technologies, so as to form a robot industry structure that is internationally competitive.” The process is very similar to America’s Roadmap for U.S. Robotics developed and presented to the American Congress in 2009 by an industry coalition. It provided key holdups that needed solutions before critical areas of the industry could grow. Congress has been paying attention as can be seen by the recent manufacturing and robotic initiatives and corresponding fundings.

“China is now at the stage of industrial transformation. To achieve the goal, China has to gradually change from labor-intensive style to a more sustainable and innovative development. Robots play a crucial role in supporting the process. It helps Chinese enterprises to reduce cost and increase efficiency and competitiveness.

It is forecast that China will have 40 million less workers in the 20-30 age bracket in the next decade compared to ten years ago, because of the aging population. Robots are expected to fill the gap.”