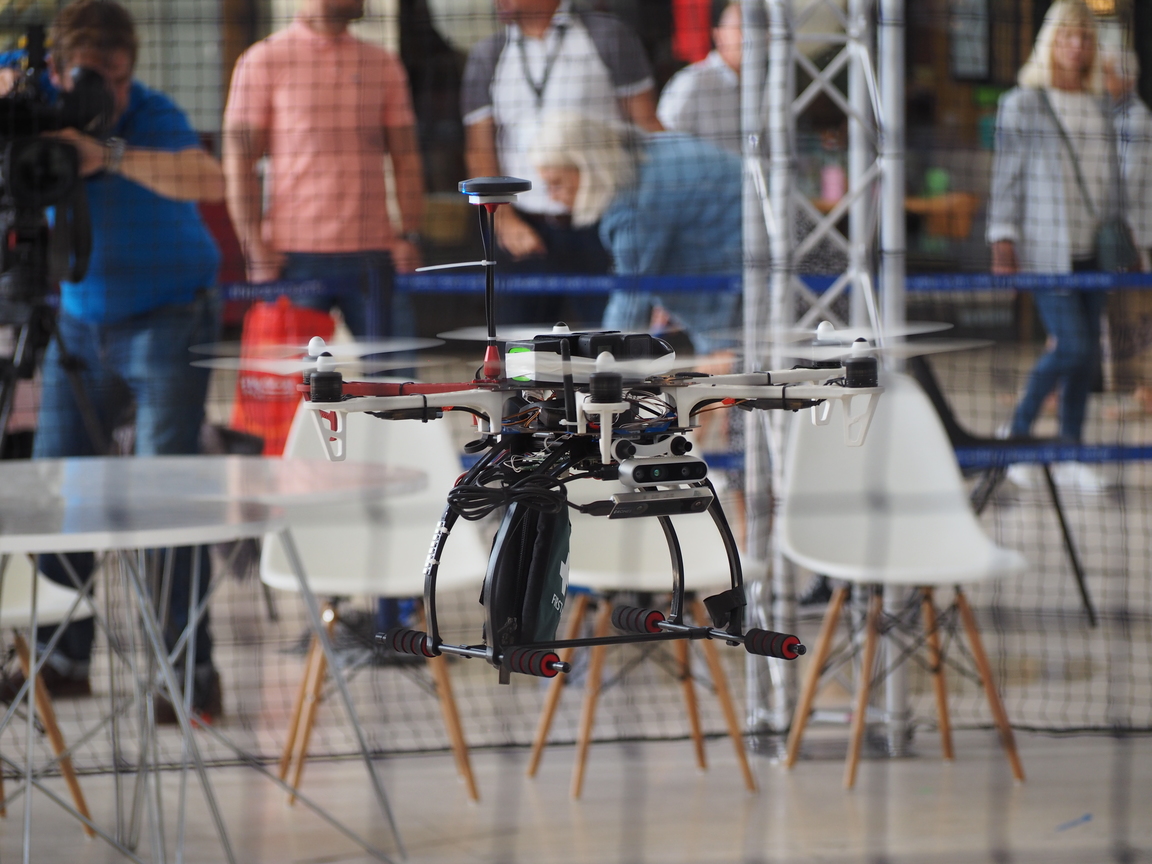 The European Robotics League (ERL) presents the SciRoc Challenge, a new robotics competition on smart cities that occurs every two years in a European city. Funded by the European Commission’s Horizon 2020 framework programme, the first SciRoc challenge takes place in the city of Milton Keynes, United Kingdom. In the context of smart shopping, robots interact with the Milton Keynes Data Hub (MK:DataHub) in a shopping mall. They update stock lists, take customers’ orders or find out the location of a person in need. On the third day of the competition, teams continued competing in the five different episodes and the public could see the first trials in the emergency category. The aerial teams were ready to start delivering autonomously the first-aid kit to the mannequin placed inside the flying arena!

The Smart Cities Robotics challenge has three categories: human-robot interaction & mobility, manipulation and emergency.  The emergency category is inspired by the European Robotics League Emergency Service Robots. Due to the constraints associated with the competition taking place inside a shopping mall, the SciRoc consortium designed the episodes only for the aerial domain.

The Fast delivery of emergency pills (E12) episode aims at pushing the state of the art in the context of Smart Cities and last-centimeter delivery, focusing on autonomous capabilities and indoor navigation for aerial robots. This episode benchmarks some of the key functionalities autonomous aerial robots require to operate in indoor environments, such as localisation, trajectory planning and obstacle detection and avoidance.

The main functionalities of this episode are autonomous navigation in GPS-denied environments and autonomous obstacle detection and avoidance. Another functionality necessary for completing the episode is to carry and deliver objects in specific locations.

Teams have 20 minutes to complete this episode in which an aerial robot must deliver a first-aid kit with a medication to a person that is feeling unwell. A referee, in the role of a medical manager, attaches the first-aid kit to the aerial robot. The robot must then request the estimated location of the person to the data hub and fly autonomously to it as fast as possible, whilst detecting and avoiding obstacles on the way. Once it arrives to the location it must land nearby the person, detach the first-aid kit and return to the starting point. 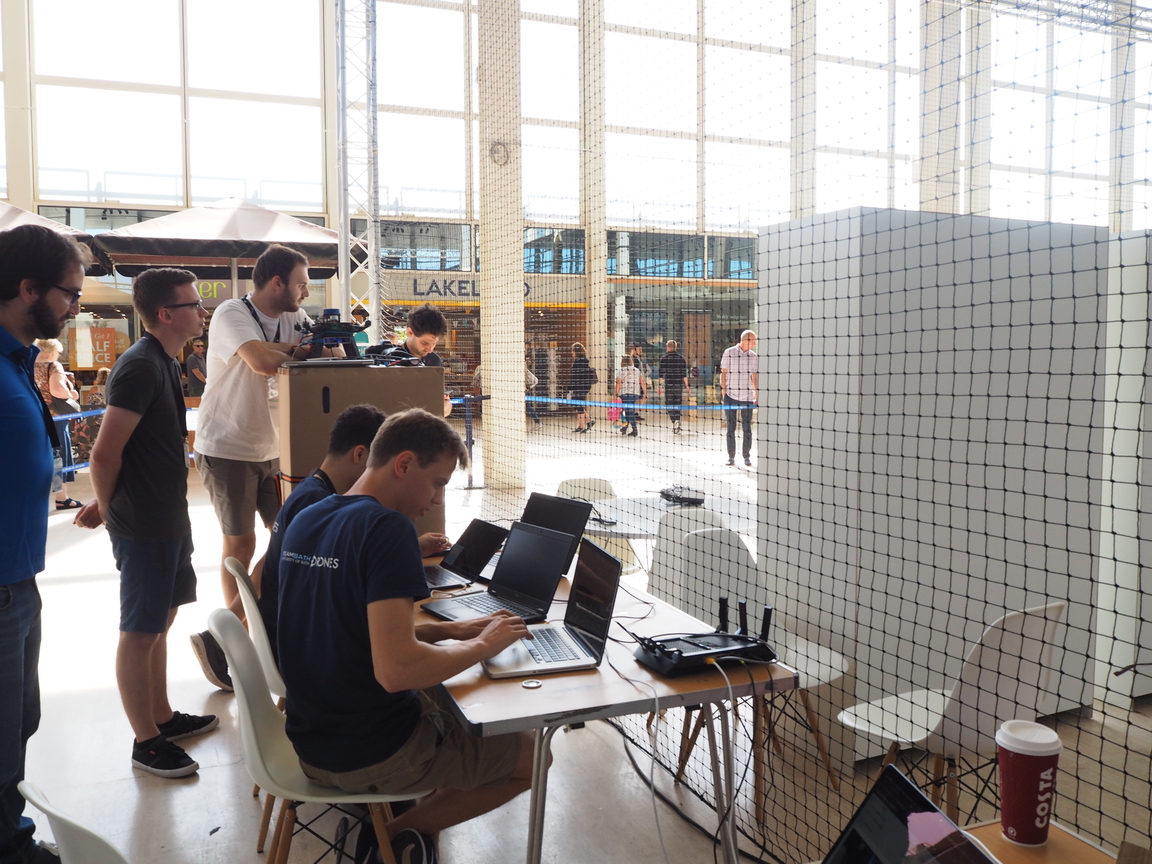 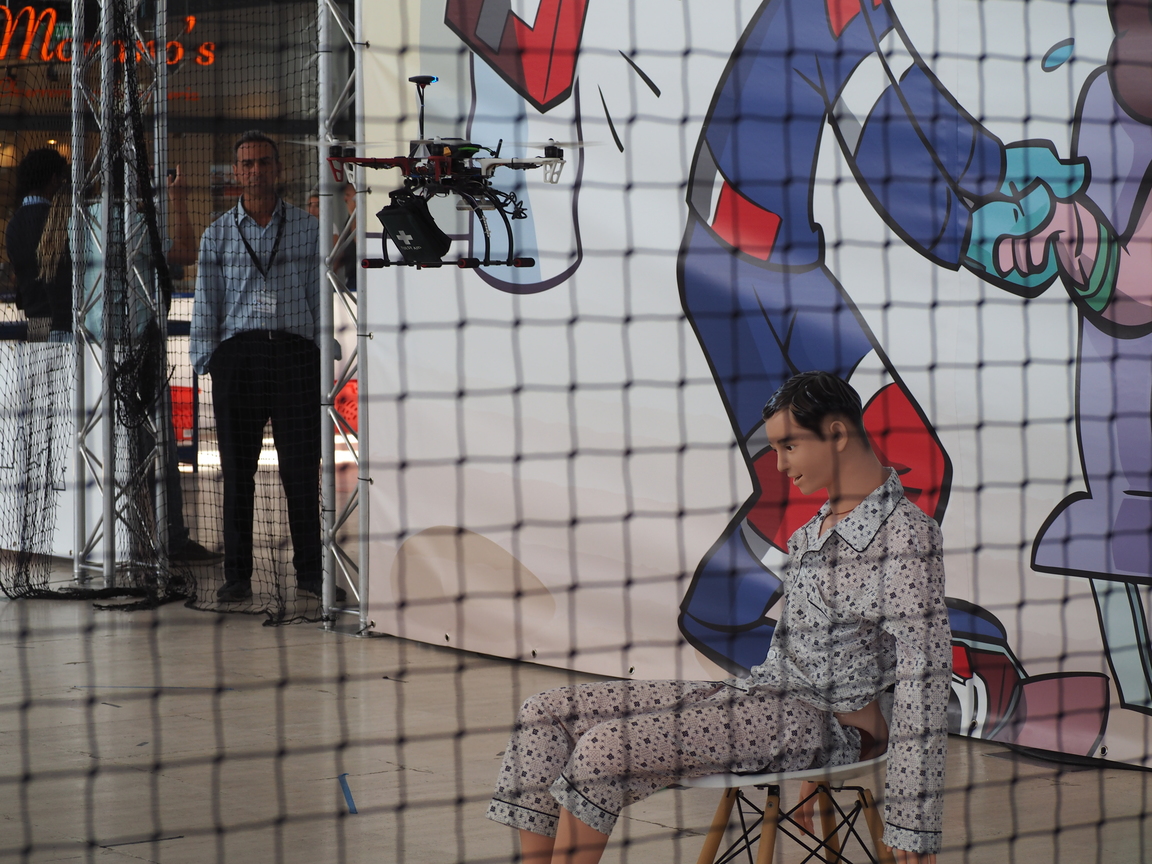 The European Robotics League (ERL) Emergency Robots competition already proposed the challenge of a drone-based delivery for emergency situations. The teams participating in ERL Emergency 2017 in Piombino and ERL Emergency 2019  in Seville,  showcased accurate and fast delivery capabilities in an outdoor realistic post-disaster scenario. The task benchmarks of Episode E12 were aligned with the ones of the ERL Emergency league competition and adapted to an indoor environment without access to GPS coverage.

“While drone-based delivery of items has been a popular topic in recent years with a lot of media attention, they all assume that the aerial platform will be operating in outdoor obstacle-free spaces. Outdoor operation for aerial robots based on GPS can be generally assumed due to the existence of low-cost commercial products offering mature performances in a wide variety of applications. Despite this, emergencies may take place in any scenario, and there is no guarantee of a communication infrastructure or even access to GPS” explains Francisco J. Perez Grau, Senior Researcher at the Advanced Center for Aerospace Technologies (CATEC) and lead member of episode E12 technical committee.

The obstacles in the competition arena are those normally present in a shopping mall, such as plants, tables, chairs, shelves, lights and banners. These objects can be disposed in two different configurations, one easy and one hard, so the difficulty of the episode can gradually be increased. In the easy configuration there are only vertical obstacles between the take-off and delivery locations. This means that aerial robots should be able to reach the person’s location by performing 2D navigation at a constant height. In the case of the hard configuration where there are vertical obstacles, but also objects on the ground and hanging from the ceiling, the aerial robots must perform true 3D navigation. 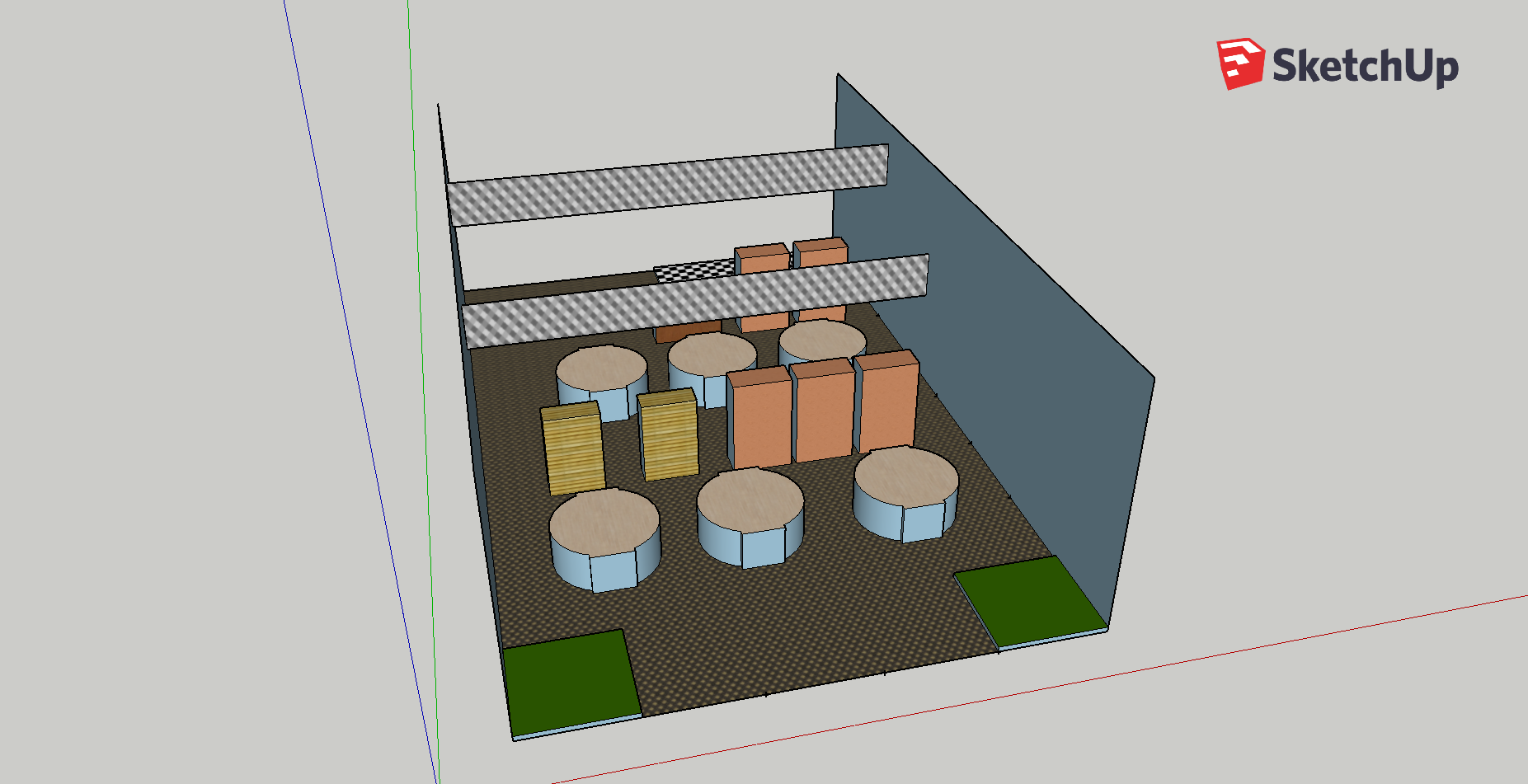 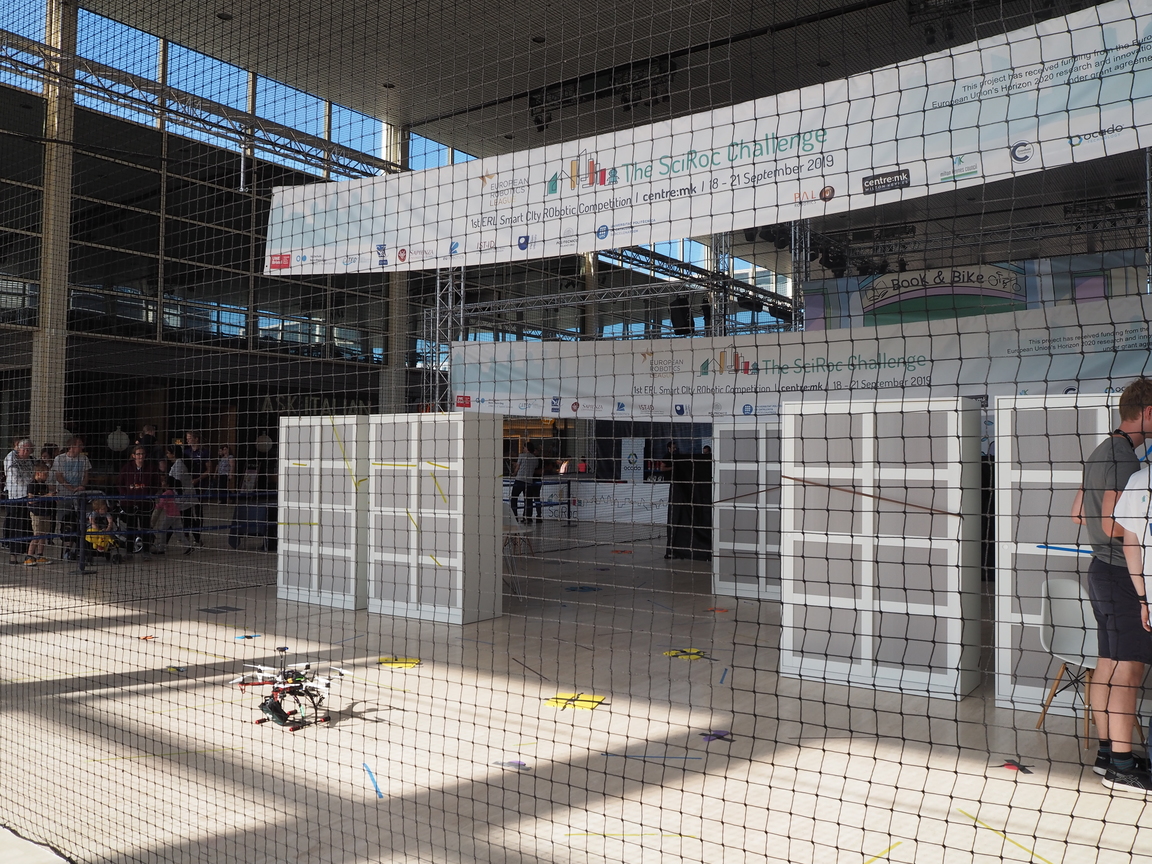 MK Data Hub Interaction
Milton Keynes, the city hosting the ERL Smart Cities Robotics challenge, is equipped with the MK:DataHub, a data acquisition and management infrastructure consisting of live sensors that provide information about different aspects of the functionalities of the city, such as transport, environment, energy, water, etc.. The data gathered by the aerial robots in this episode is communicated to the MK:DataHub infrastructure to contribute to the smart city data platform.

“The robot must interact with the MK Data Hub to know the location of the person that needs the medication. The robot also communicates its own position and status, for example, going to the customer location, dropping the firs-aid kit, going back to the starting point, etc. All this information exchanged with the data hub is displayed on a screen for the public and also to the referees’ displays so they can see if the data is correct or not, and validate it” explains Martino Mensio, Research Assistant at the Knowledge Media Institute (KMi) and one of the referees of episode E12. 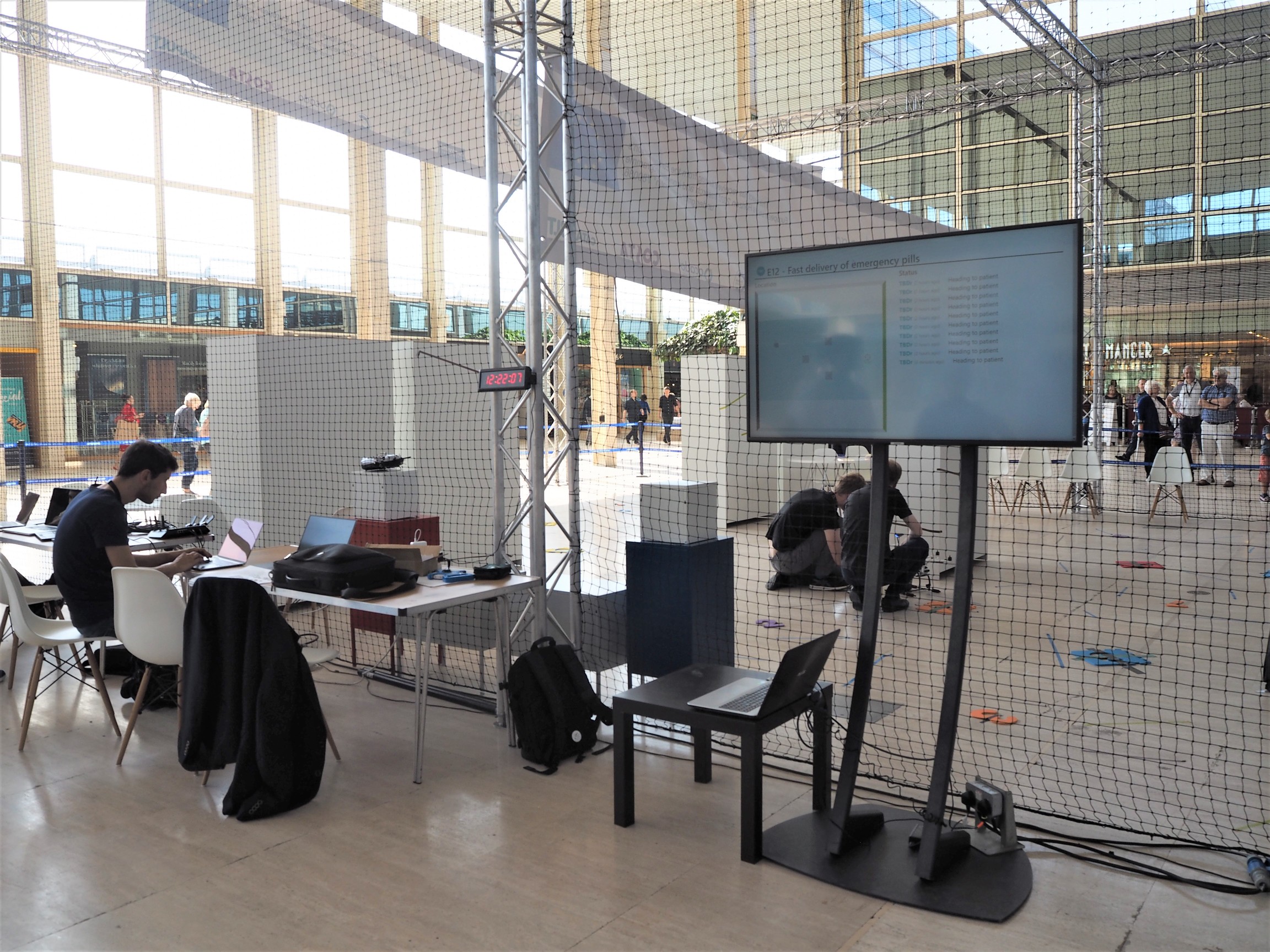 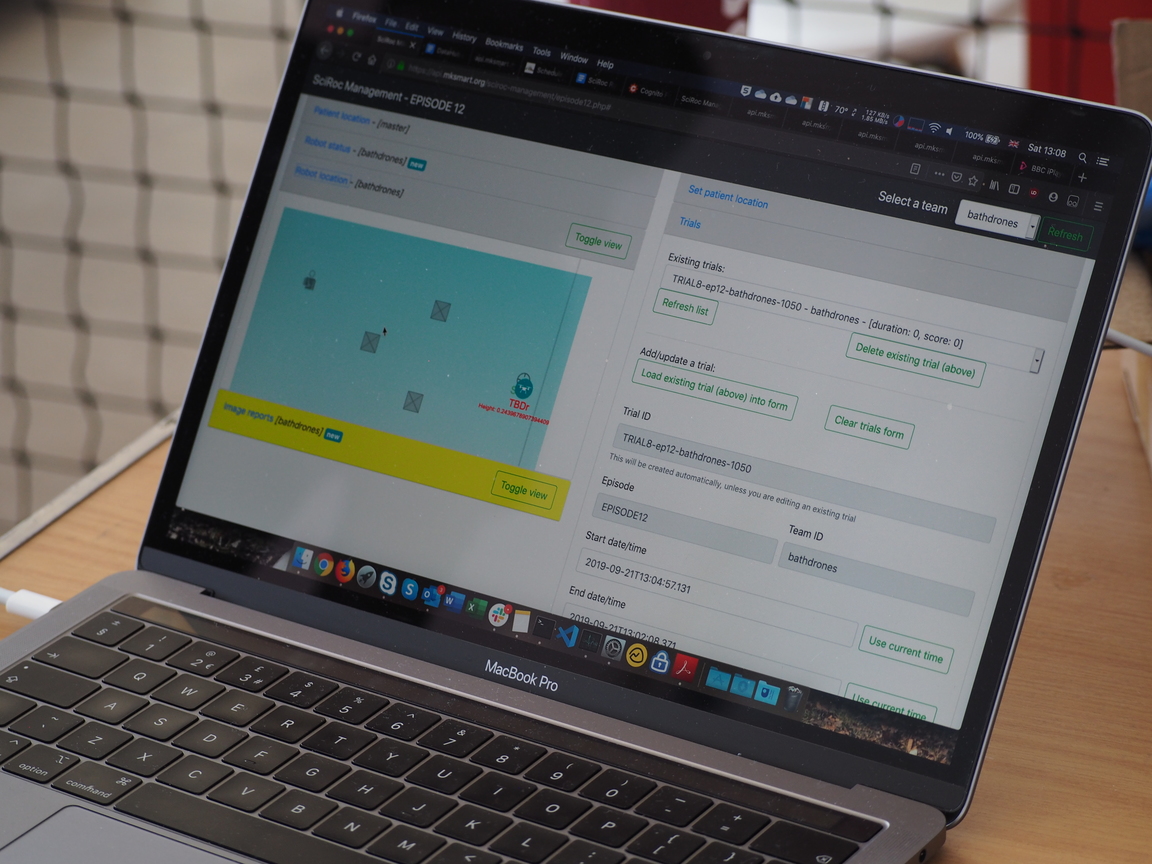 The teams participating in episode E12 are UWE Areo and TeamBathDrones Research, both from the United Kingdom. UWE Aero is a rookie team in the ERL competitions, while TeamBathDrones already participated in ERL Emergency 2019 local tournament in Seville.

The aerial platforms used in this episode are powered by electricity and for safety reasons, they are limited to a maximum diagonal size of 80cm. On the first day of the competition, the SciRoc referees assessed the robot’s compliance with the rules and performed the safety checks. Teams have been testing their robots in the flying arena and started today the competition runs to qualify for the final.

“The tasks in SciRoc are more difficult than the ones in other competitions such as MAAXX Europe. For example, the obstacle avoidance task is not in MAAXX and the localisation is more complex as it needs to be very accurate” explains Jordan Cormack, PhD student at UWE Bristol and team leader of UWE Aero. Conrad Brindle, student of aerospace engineering also at UWE Bristol, adds “one of the challenges has been finding a space like this arena to test our drone. It is relatively safe to test localisation and obstacle avoidance with a land robot in a lab, but in the case of the aerial robots they require a flying arena with specific infrastructure. This week we have been also developing, not only testing.” 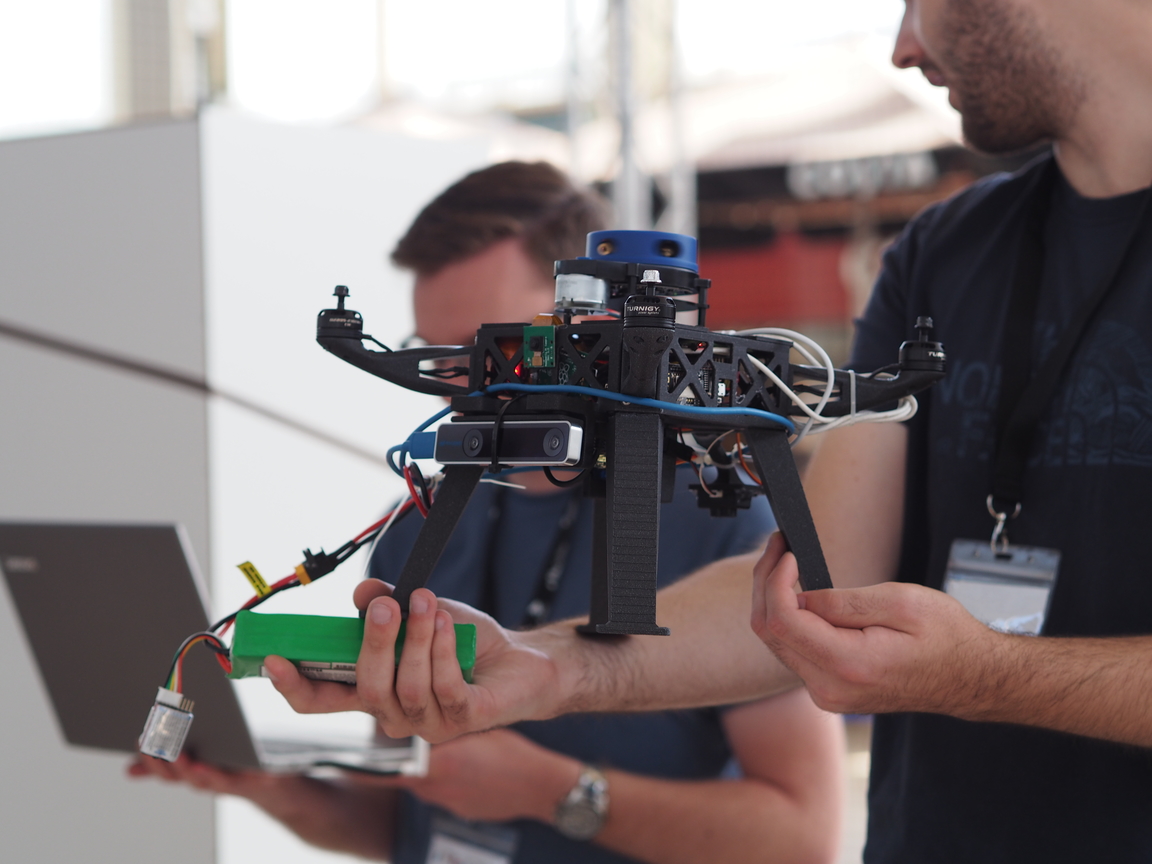 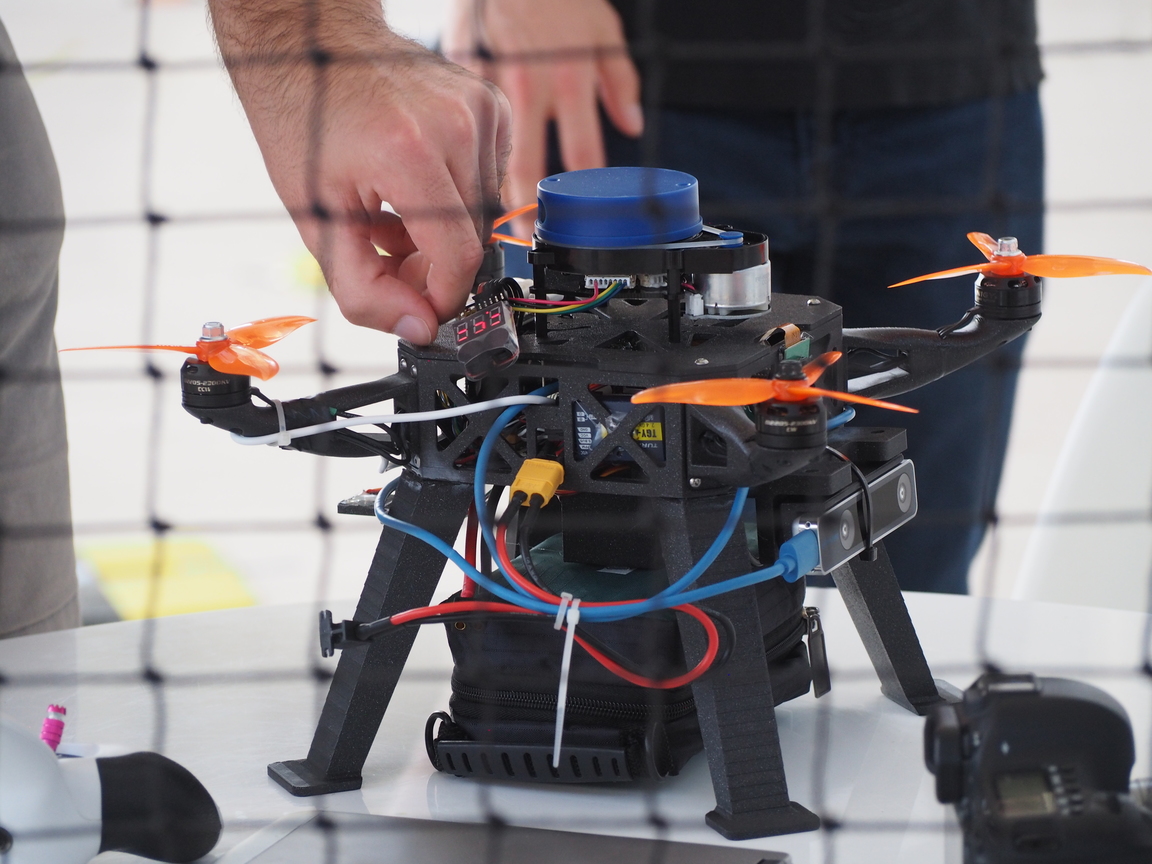 For detailed information in this episode including the evaluation criteria, check the  SciRoc Rulebook – episode E12