Even beyond the grounds of private companies, tests of automated transport have been successful. A truck platooning system, in which groups of two or three “smart trucks” travel closely behind one another communicating wirelessly, arrived in Rotterdam in April. The Ministry of Transport in Singapore seeks proposals to develop something similar.

Also in Singapore, Airbus is pursuing an autonomous air taxi project to deliver parcels to ships in the port. On the water, the cargo ships of the future are expected to be crewless and remote-controlled.

The so-called “last mile”, delivery to the doorsteps of businesses and consumers, is probably the most complex task in the supply chain – especially in busy urban environments full of cars, bicycles and children playing in the streets. Intelligent self-driving vehicles can transport up to 100 pounds. In Paris, two entrepreneurs are building a flying river shuttle that will bypass traffic by travelling above the Seine.

Raw materials can now be extracted in automated mines; they then reach the smart factory 4.0 and are transported from there by wireless truck or delivery drone to the automated distribution centres of retailers or the smart boxes of individual consumers.

The point? The autonomous end-to-end supply chain is almost complete.

Automation in the world of logistics will create enormous opportunities when it comes to making the flow of goods safer, more efficient and more environmentally friendly. Self-driving cars alone would reduce accidents by 70%, improve fuel efficiency by 20%, and save about 1.2 billion hours of driving time over a period of 10 years. Less congestion will make the flow of goods and people faster – and those countries with driver shortages, such as the United States, United Kingdom and Germany, will find relief.

The improvements do not come without challenges, however. One key concern is cyber risk. We need to ensure that autonomous units cannot be hacked. Also, ethical questions need to be answered – how to decide whom a vehicle is supposed to save in case of an accident, for example. Policy-makers also need to consider the impact on jobs: where to start, where to slow down the autonomous economy to avoid unwanted consequences, starting with unemployment. The autonomous movement, which began in the early 1950s, is now in full swing. Of 1,433 consumers surveyed in the US, 70% think they will order the first drone-delivered package within the next five years. The majority of policy-makers (88%) expect autonomous vehicles to gradually become a reality within the next 10 years, based on a recent worldwide self-driving vehicle study by the World Economic Forum.

According to the same survey, 60% of policy-makers expect a ban on private cars in cities over the next 15 years. And this might not be limited to private vehicles: over time cities will further regulate goods deliveries, which are one of the main causes of daytime congestion. Therefore, not only transportation companies, but also shippers need to prepare for an autonomous future.

Capturing the full potential of the automated supply chain requires rethinking entire logistics systems. There will be an evolution from the fixed “collect in the evening and deliver during the morning” approach to a fluid system of continuous movement and supply. Platoons, drones, tunnels, tubes, rolling robots and automated warehouses make the constant flow possible.

But this requires flexibility and innovation on the operator level, as well as investments in technology and infrastructure. It requires close collaboration between not just manufacturers, retailers and developers, but policy-makers and the citizens themselves. 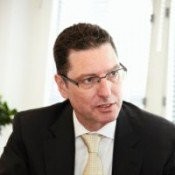 Wolfgang Lehmacher is Head of Supply Chain and Transport Industries at the World Economic Forum.

Wolfgang Lehmacher is Head of Supply Chain and Transport Industries at the World Economic Forum.