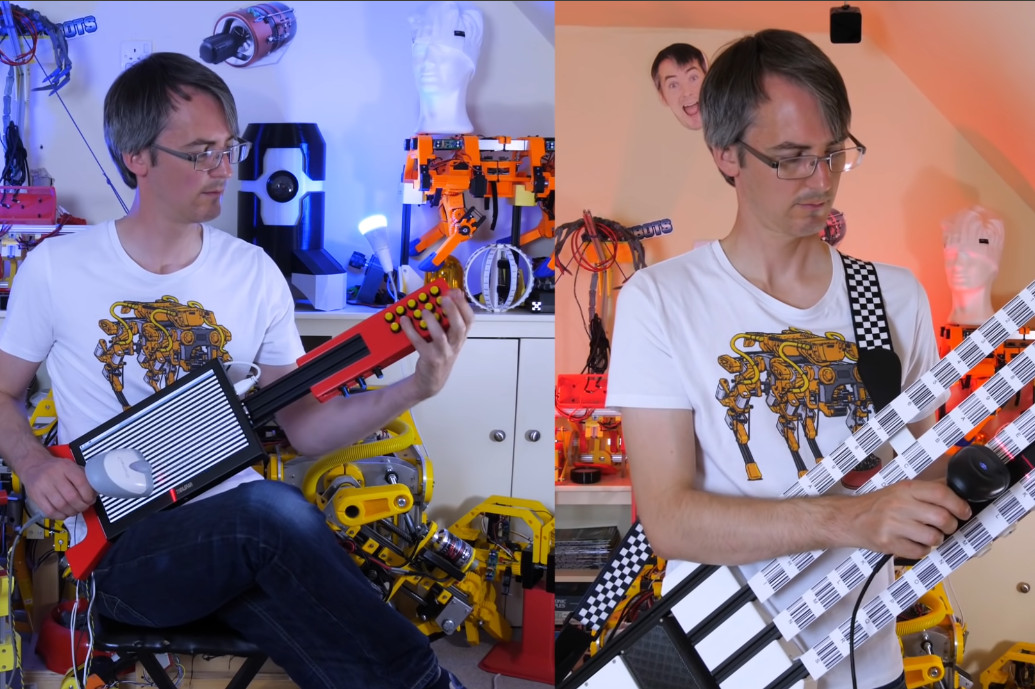 As every other Saturday, I’m bringing you another cool open-source project from James Bruton. Today, how about becoming an experimental musician with your own barcode scanner synthesizer?

I introduced James Bruton in the first post of this focus series on him, where I showed you the Boston Dynamics-inspired open robot dogs projects that consolidated him as one of the top maker on YouTube. As a sort of musician, the barcode synth project I’ve picked for this second post grabbed my attention among the countless videos he’s got on his channel.

To be more specific, the barcode synth consists of two projects. A bit more than a year ago, James showed how to build a four-neck guitar synth with the frets (the place where you put your fingers to play a note on the guitar) being barcodes instead of strings. To play this guitar, you only need a barcode reader connected to an Arduino that converts the data read from the barcodes into a number that represents a MIDI note – which is a digital representation of a musical note based on the MIDI standard. You can then plug the Arduino into a synth or your computer (if you love virtual instruments as much as I do!) to transform the MIDI output into actual sound. Extra features of this guitar included pitch bending and octave shifting buttons. You can access the open-source code of this type of guitar here, and enjoy James’ explanation (and performance) in the following video:

A couple of months ago, James made an improved version of the previous guitar synth. Instead of using the number given by the barcode, for this improved synth he hacked the barcode reader to interpret the barcodes as images so that the output is the raw square wave that it sees. With he help of a Teensy microcontroller to do the digital signal processing and a Raspberry Pi to display barcode images on a screen fitted to a 3D-printed guitar, he could produce a richer range of sounds compared to the previous version. If you want to build you own barcode synth, check out the open-source files and his video (you’ll be impressed to find out how a zebra sounds like!):