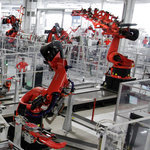 (New York Times) “Robots far more adept than those now commonly used by automakers and other industries are replacing workers in both manufacturing and distribution.  Older robots cannot do such work because computer vision systems were costly and limited to carefully controlled environments where the lighting was just right. But thanks to an inexpensive stereo camera and software that lets the system see shapes with the same ease as humans, this robot can quickly discern the irregular dimensions of randomly placed objects.”