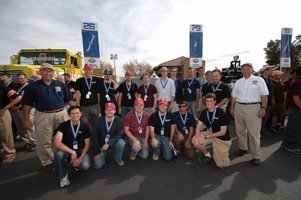 Our inaugural episode centers on the 2007 DARPA Urban Challenge, featuring interviews with professor Daniel Huttenlocher from Team Cornell and Rick Yoder from Velodyne, a producer of LIDAR sensors used by several teams in the robot car race. Dan Huttenlocher is professor of Computing, Information Science and Business at Cornell University in Ithaca New York. As the co-leader of Cornell’s racing team for the 2007 DARPA Urban Challenge, he spent countless hours testing the autonomous car which finally finished among the six final automobiles capable of following California’s road code over 56 miles of a mock urban environment. With design in mind, his team of 13 students managed to discretely embed a slick black 2007 Chevy Tahoe with a Velodyne LIDAR, three IBEO 1.5D LIDARs, five 1D SICK LIDARs, five millimeter-wave radars, and four cameras. Of course, millions of data points per second don’t come for free and Cornell’s trunk is the home of 17 dual core processors.

Since a pile of impressive hardware and CPU is not enough, Team Cornell developed the artificial intelligence and control software needed to allow their robot to locally represent its location on the road and further figure out, on a more global scale, where it really was in the world. Moreover, the Cornell car also needed to localize and track other objects in the environment and ideally reason about their next moves. So, what went wrong in this little fender bender with MIT’s car (see video below)? I guess the professional human drivers during the challenge weren’t wrong, when they said that Cornell’s car drove like a human. Rick Yoder is an employee at Velodyne, a new-comer in the field of LIDAR (Light Detection and Ranging) sensors. The HDL-64E LIDAR uses an impressive 64 stationary lasers on a base rotating at 900rpm. This sensor was specifically designed for the 2007 DARPA Urban Challenge, and was used by around a third of the participating teams, although some other teams may have been turned away by the hefty $75,000USD price tag! Though not yet destined for the consumer market, Rick hints at a new series of sensors that may soon find their way into your car.