Demonstrations at IROS, with Péter Fankhauser and Mike Rubenstein

In today’s show, we hear about two demonstrations that caught our attention at the IEEE/RSJ International Conference on Intelligent Robots and Systems (IROS). Péter Fankhauser from the ETHZ in Zurich tells us about the Rezero ballbot, a balancing robot that speeds around on a sphere. Mike Rubenstein from the Self-organizing Systems Research Group at Harvard then tells us about their efforts to make swarms of 1024 robots a reality with the kilobot project. 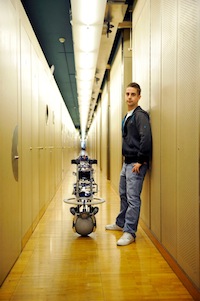 
Self-supervised policy adaptation during deployment
Robots-as-a-Service
Robots4Humanity in next Society, Robots and Us
How to build a robotics startup: the product idea
Back to Robot Coding part 2: the ethical black box
more about ..
comments powered by Disqus