In this episode, Audrow Nash speaks with Professor John Leonard from MIT about his research on dense, object-based 3D Simultaneous Localization And Mapping (SLAM).

Leonard explains what SLAM is, as well as its practical applications. The explanations include what it means for SLAM to be object-based (versus feature-based) and to have dense (versus sparse) environmental mapping. The interview closes with advice for aspiring roboticists. 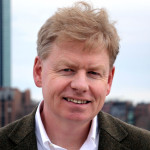 John J. Leonard is Professor of Mechanical and Ocean Engineering and Associate Department Head for Research in the MIT Department of Mechanical Engineering. He is also a member of the MIT Computer Science and Artificial Intelligence Laboratory (CSAIL). His research addresses the problems of navigation and mapping for autonomous mobile robots. He holds the degrees of B.S.E.E. in Electrical Engineering and Science from the University of Pennsylvania (1987) and D.Phil. in Engineering Science from the University of Oxford (1994). He studied at Oxford under a Thouron Fellowship and Research Assistantship funded by the ESPRIT program of the European Community. Prof. Leonard joined the MIT faculty in 1996, after five years as a Post-Doctoral Fellow and Research Scientist in the MIT Sea Grant Autonomous Underwater Vehicle (AUV) Laboratory. He has served an associate editor of the IEEE Journal of Oceanic Engineering and of the IEEE Transactions on Robotics and Automation. He was team leader for MIT’s DARPA Urban Challenge team, which was one of eleven teams to qualify for the Urban Challenge final event and one of six teams to complete the race. He is the recipient of an NSF Career Award (1998), an E.T.S. Walton Visitor Award from Science Foundation Ireland (2004), the King-Sun Fu Memorial Best Transactions on Robotics Paper Award (2006), and he is an IEEE Fellow (2014).