In this episode we dive into the world of programmable matter with Michael Tolley and Jonas Neubert from the Computational Synthesis Laboratory run by Hod Lipson at Cornell University, NY. They present their amazing hardware and control to stochastically assemble matter in fluid.

Michael Tolley is finishing his PhD under the supervision of Hod Lipson at Cornell University.

Imagine being able to throw a hand-full of smart matter in a tank full of liquid and then pulling out a ready-to-use wrench once the matter has assembled. As a first step in this direction, Tolley has been looking at how smart cubes can assemble into physical objects in fluids. The interest in using fluid stems from the fact that modules, transported by the flows in their environment, do not need any power or motors. The shapes and latching mechanisms on his cubes, whether on the micro– or centimeter– scale, were smartly designed to enable autonomous alignment and connection. In the end, his approach at building smart matter follows the idea of embodied AI where the intelligence of the robot is embedded in its physical body and its interactions with the environment.

Beyond hardware, Tolley has been looking at controlling such stochastic systems by changing the flows in the tanks to assemble 2D and 3D structures and even repair objects when a part has been broken off. For this purpose, he’s been working on a Programmable Matter Simulator to investigate the possibilities to harness random motion. 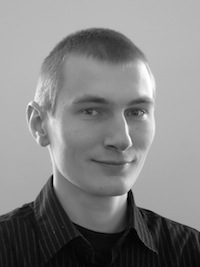 As opposed to Tolley, he is looking at making active modules that can compute, connect to neighbors, communicate and open and close valves to direct liquid flows. His setup, presented at ICRA this year is very far from the classical screws and blots used in robotics. Indeed, connections are made by autonomously soldering and desoldering blocks… in liquid. In another original development, valving is done by heating the surrounding fluid which then reacts by becoming a gel and blocking the flow.

Neubert covers all the neat technical developments in his system and the challenges in making electronics that operate in liquid.

Latest News:
For videos of this week’s Robots news, including the Surena 2 humanoid robot and the prosthetic arm controlled by thought, have a look at the Robots Forum.