In today’s episode we discuss the national funding strategies of Japan, as a part of a series on funding strategies worldwide. In particular, we’ll be talking to an expert and leading figure in Japanese Robotics, Tomomasa Sato, who will give us insights into the Japanese robotics roadmap – for the past, present and future! 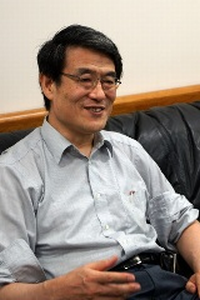 Prof. Tomomasa Sato received his bachelor, master and PhD degrees in Mechanical Engineering from the University of Tokyo. After completing his PhD, he joined the Electrotechnical Laboratory of the Ministry of Industrial Science and Technology. In 1991, he then moved to the Research Center for Advanced Science and Technology of the University of Tokyo, where from 1998 onwards, has was Professor of the Department of Mechano-Informatics where he directed the Intelligent Cooperative Systems Laboratory.

His research interests include intelligent machines, robots and environments. He is an active member of the IEEE Robotics and Automation Society, Japan Society of Mechanical Engineers, Society of Instrument and Control Engineers, and Robotics Society of Japan, which he presided from 2007 to 2008 and lead the creation of the Academic Roadmap on Robotics.

He currently is a project manager for intelligent robot projects supported by the Ministry of International Trade and Industry, otherwise known at METI.

During this interview, Tomomasa Sato tells us about the money spent in robotics, the differences between industry and government funding and developments and the cultural differences that make Japanese people accept robots into their daily lives.


DOE’s E-ROBOT Prize targets robots for construction and built environment
The future of robotics research: Is there room for debate?
Self-supervised learning of visual appearance solves fundamental problems of optical flow
Deep Sea Mining
Women in Robotics Update: introducing our 2021 Board of Directors
more about ..
comments powered by Disqus