Today’s episode was recorded at ICRA in Anchorage Alaska, one of the major conferences in robotics with a 1575 head count and 857 papers. At the robot exhibit, we met with the Vice President in Engineering of French-based company Aldebaran, Luc Degaudenzi and with his colleague Cédric Vaudel who is the Sales Manager for North America. Aldebaran makes the Nao humanoid robot which has been seen at Robocup, showing off his soccer skills. We also talk with Nao in our first ever interview of a robot! Nao will be presenting himself and his version of Star Wars. 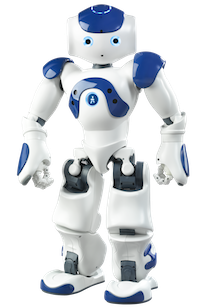 Listen in to our podcast where Nao will present himself and tell us a story in our first interview ever with a robot!

Nao has four microphones fitted into his head and a voice recognition and analysis system. He can also express himself by reading out any file stored locally in his storage space or captured from a web site of RSS flow. Nao sees by means of two CMOS 640 x 480 cameras, which can capture up to 30 images per second. He can react to touch by means of a capacitive sensor placed on the top of his head. Finally, Nao can communicate through infrared senders/receivers or also by logging on to your local network via Wi-Fi. 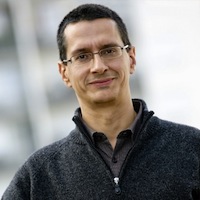 Luc Degaudenzi is director of research and development at Aldebaran Robotics where he manages a crowd of around 40 people working on electronics, mechatronics and fun software for the Nao robot. Before working at Aldebaran, Degaudenzi worked in the mobile phone sector as technical and program director at Matra, Alcatel and Sony Ericsson. He’ll be telling us about the Nao platform, its possibilities and its first kicks at Robocup. 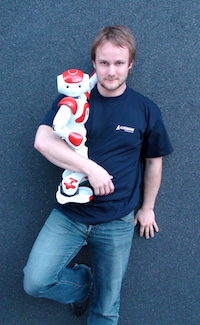 After working for IBM for several years, he decided to take part in the robolution. Now, he coordinates business priorities and strategy deployment of Aldebaran Robotics in the whole region of America. He’ll be telling us about the origins of the name Nao and where he thinks the Humanoid market will be going in the future!

For more information on this episode’s news, including a video of ABB’s robot drummer as well as details on the promising echolocation device for robots and the 4 nanometer robot, visit the Robots Forum.