In this episode, Ron Vanderkley speaks with Raymond Sheh, who is a Senior Lecturer at the Department of Computing at Curtin University and head of the Intelligent Robots Group.

They discuss his Open Academic Robot Kit initiative, which aims to build an international community of students and researchers, all designing and building robots using a compatible set of electronic and basic mechanical components, plus 3D printed parts. Builders then publish their designs so that anyone can recreate and build on them. 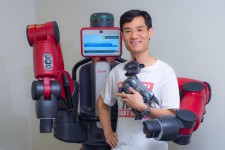 Raymond Sheh is a Senior Lecturer at the Department of Computing, Curtin University. He specialises in the areas of Artificial Intelligence, Robotics and Cyber Security, and has been involved in robotics research since 2003.

Raymond’s current activities include robotics for hazardous environments, surgical robotics and the application of robotic sensing technologies to industrial automation. The former includes a significant education and research outreach component to other universities and high schools through his position on the Executive Committee of the International RoboCup Rescue Robot League competition.

Prior to joining Curtin in 2013, Raymond was with the US National Institute of Standards and Technology, developing standardised test methods for response robots used in hazardous environments. He holds a PhD in Artificial Intelligence from The University of New South Wales, an Honours degree in Electronic and Communications Engineering from Curtin University and a degree in Computer Science from Curtin University.

Ron Vanderkley: Raymond, can I get you to introduce yourself to the podcast listeners?

Raymond Sheh: Hi. My name is Raymond Sheh. I’m a senior lecturer here at the Department of Computing at Curtin University [in Perth, Western Australia]. I have also recently started the Intelligent Robots Group with the aim of doing research into intelligent robots that not only perform their tasks but also can explain what they’re doing and inform us.

Ron Vanderkley: Great! I’ve heard so much about the RoboCup Rescue Confined Space Challenge. Is that something that you can quickly describe to us?

Raymond Sheh: Sure. Prior to coming to coming to Curtin, I worked with the US National Institute of Standards and Technology on developing standard ways for testing response robots — that is, robots being used by bomb squads, search and rescue, hazardous materials and so on. One of the outreach activities of this project was the RoboCup Rescue Robot League competition. This is a robotics competition — an international one — for robots that tackle this very problem: robots going into places where humans don’t want to go in order to perform tasks and discover information.

We are tackling tasks that have traditionally required fairly decently equipped universities with a correspondingly large budget. We’re not simplifying them but we’re tackling it at a smaller scale, at a scale that is possible for high schools to replicate. In line with this, we are also developing the Open Academic Robot Kit. This is a family of robot designs where all of the mechanical parts are 3D printable on a low cost printer — that is, a printer costing less than $1000.

All of the other parts are available off the shelf or by mail order anywhere in the world and all the design instructions and source code are available in easily editable form under an open source license. The idea is that anyone, anywhere in the world can download all of the information; they can reproduce the base design for this robot. They can use the competition as an application to inspire their own development and their own research and then they can redistribute this back to the international community so that everyone can build on it.

The aim is to be a catalyst, not just for this application but for bringing interesting, research level robotics, in general, to high schools and the community.

Ron Vanderkley: Is the uptake of participation increasing?

Raymond Sheh: Indeed. We ran our first pilot in the first half of this year with Scotch College and Christchurch Grammar. We also had a school from Canberra participating in collaboration with the University of New South Wales, as well as one from Maryland in the US participating in collaboration with the National Institute of Standards and Technology at the Gaithersburg Campus. We all went to the international competition, which was held in China this year, and we held some demonstrations.
The goal is to have more schools participate in the second half of this year. So that, next year, when the competition is being held in Leipzig in Germany, we would have our first truly international event at this scale, with high schools tackling what was previously university level research.

Ron Vanderkley: This is kind of like a DARPA challenge?

Raymond Sheh: It’s a little bit different to the DARPA challenge. I was actually involved in developing the challenges within the DARPA robotics challenge back when I was working with NIST. The DARPA challenges were deliberately very difficult. There’s a term called “DARPA hard,” because they’re trying to induce such a disruptive improvement in capabilities. You really do require fairly significant resources to devote to this.
The DARPA competition’s aim is to improve capabilities very rapidly and they use the fact that this is a very impressive competition as the motivator for getting people interested outside in the general community. We have similar goals but we tackle it a slightly different way. We present a challenge that is within reach of an interested designer technology teacher and a dozen high school students. They can tackle the problems that we put in front of them. They don’t just have to watch from the sidelines. They’re able to participate, they’re able to actually solve these challenges in ways that are very interesting, in ways that the university researchers may not have thought of. That’s one of the wonderful things about this challenge: everyone can be a researcher, everyone can be an inventor in their area of expertise and then they can share that with the rest of the world.

Raymond Sheh: Hence the Open Challenge. Of course, the DARPA robotics challenge was also open. DARPA actively encourages the teams to publish and transition their developments outside. We just tackle them at slightly different scales.

Ron Vanderkley: If an enthusiast wanted to find out more about the Open Academic Robotics Kit, is there a website?

Raymond Sheh: Indeed. The website for the open academic robot kit is oarkit.org, Open Academic Robot Kit. We also have information linked from our group, intelligentrobots.org

Raymond Sheh: Well I think that there are a few frontiers that we do need to address in robotics that, arguably, haven’t had the focus that I think they’ve deserved. I’m sure that your listeners are very aware of the various high profile cyber attacks that have been happening around the place. They’re starting to attack what we call “cyber physical systems,” computer systems that have an impact in the real world. The electricity grid is one, but robots, automated buildings and the like are another.

Security in these robotic systems is somewhat lacking, mostly because the intersection between people doing robotics and people doing cyber security hasn’t been as tight as it should be. I think one of the big frontiers that needs to be addressed is: how do we make these systems secure? Here at the Department of Computing we also have a big focus on cyber security and we mesh our activities very closely.

The next area where I have some concerns is that of the engineering of the software that goes into a lot of automated systems. As these systems become ever more complicated and ever more connected and ever more modular, issues with bugs and maintaining difficulties become quite significant. The development of good software engineering practices and infrastructures becomes ever more important, in order to make sure that these systems do the right thing and do what they intend to do. Again, naturally, software engineering is one of the areas that the Department of Computing here has a strong focus on.

When people talk about worrying about the robot apocalypse, I think the problem isn’t going to be that the robots, all of a sudden, decide that humans are a nuisance and do away with us like they seem to do in the movies. I think what is a risk is either some fairly catastrophic bug, a mistake that causes issues, or a Doctor Evil somewhere who breaks into our systems and commandeers them. The scary thing is if they do it well, if we don’t have protection in place, if we don’t have the defenses, we won’t know until it’s too late.

I think those issues are more important than questions about whether artificial intelligence systems are going to become sentient. We should worry more about the people who are already sentient.

Ron Vanderkley: What advice would you give a person interested in robotics? Should they look at a multidisciplinary approach?

Raymond Sheh: A multidisciplinary approach. I don’t necessarily advocate doing what I did. I couldn’t decide what I wanted to do so I did a double degree. In my case it was electronic and communications engineering and computer science, here at Curtin University. Even if you do your degree in, say, computer science or electronic engineering or whatever the case may be, get involved in the robotics club, get involved in open source projects, get involved in other activities that keep you in touch with all of these other areas.
Robotics competitions are actually very good for this. They make you tackle a problem that hasn’t been solved before and give you the freedom to do so in a way that exercises all of these different areas. We don’t care how you build the robot, you just need to solve this problem.

Ron Vanderkley: Where does art fit into the equation?

Raymond Sheh: Well, problem solving is an art. If you think about it, problem solving is an art form. That’s one way of looking at it. When I refer to art in robotics, though, I actually refer more to the consideration of human factors and the fact that this system needs to convey meaning to a human and needs to be able to receive the human’s intent. That requires an understanding of how humans behave both rationally as well as emotionally.

A human system interaction that is well informed from an art perspective will surely be easier for the vast majority of people to interact with than one that has not had that consideration. I think art is very important in that regard. The other aspect of it, the field of art … I think we’re starting to get to the point where the field of art can be augmented by robotics in a way that is assessable economically and technically for many more artists.

One of the things that I hope will happen with the Open Academic Robotic kit isn’t just that it gets picked up by researchers and scientists and engineers, I hope that it gets picked up by artists too. They don’t need to modify any of the electronics or any of the code. Because everything is 3D printed they can make these devices, and make robots more artistic, more aesthetically appealing. They can design them to elicit emotions and to appear as different things.

I think, certainly, that while we may not necessarily want a response robot that looks like a kangaroo or looks like a creature of some sort, having that kind of influence can only be beneficial.

Ron Vanderkley: Thank you on behalf of the podcast for your time.

Raymond Sheh: It was a pleasure. Thank you.