In this episode we talk about humanoid robots, or robots that resemble me and you, at least in some shape or form. We first speak with Davide Faconti, leader of the REEM project, one of the few European contenders in this field. We then speak with Jun Ho Oh from Korea who was the general chair of the last International Conference on Humanoid Robots for his snapshot view of the field. We then look at the HUBO humanoids developed in his lab.

Davide Faconti is a devoted robotics passionate and the leader of the REEM humanoid robot project. Having built his first humanoids when competing in the Robocup 2002 and 2003 championships, Faconti quickly moved on to bigger and better robots. Over the last 3 years he has been working with his team of engineers and researchers to build a new breed of humanoid robot from scratch. Sponsored by PAL Technology out of the United Arab Emirates but based in an office in Barcelona, the REEM lab has managed to produce two fully-functional prototypes, the REEM-A and REEM-B.

Even though 3 years of development by a small team is not much compared to some of the major humanoid projects such as the Honda ASIMO, the latest-version REEM-B robot sports some impressive and innovative features. Laser range finders integrated into the feet of the robot allow it to map its environment while walking. It’s payload is an impressive 12kg, while its battery life when unloaded is a full 2hrs. These functions were recently presented in a press conference in Abu Dhabi to a huge reception of journalists and VIPs including his Highness Sheik Tahnoun, and proved that humanoid robots are becoming mainstream worldwide. Check out the video below: 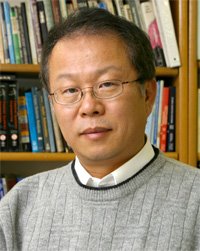 Jun Ho Oh is the director of the HUBO Lab and Professor at the Korea Advanced Institute of Science and Technology (KAIST) where he’s developed several versions of the HUBO humanoid, named by the general public. The latest version weighs 56kg and measures 125cm, has 10 independent fingers, 2 eyes (vision camera), and 41 degrees of freedom which allow it to walk and move its body parts. However, uncontent with being able to move on their own two legs, his robots can also hop-on a Segway-like vehicle and drive around. His latest robot, the HUBO-FX1 has even raised the bar in bipedal locomotion, by being able to transport people. By compensating for our human uneasiness and motion, the HUBO-FX1 turns out to be a large chair with human-like legs, capable of beating the best elephant rides.

His expertise with humanoids lead him to chair last year’s IEEE-RAS International Conference on Humanoid Robots (Humanoids08), strong of 200+ visitors, international exhibits and demonstrations. Based on this experience, we will be asking for his snapshot view on the state-of-the-art in humanoid robotics.

For more information and discussion on this week’s Robots news, including the new rescue robot enlisted at Yokohama fire department and Astrobotic’s lunar robot visit the Robots forum!