The Digger Foundation competing for a $1million prize

by The Digger Foundation
30 January 2017 The DOME Project of the Digger Foundation has been shortlisted as finalist of the
prestigious Robotics Award for Good taking place in Dubai in February 2017, where
a $1million price will be awarded to the best competitor among 10
international teams.

Mine clearance is a fundamental effort of international organizations like the United Nations, which is considering this threat as a top humanitarian priority. The world is now facing new kinds of warfare, as in Iraq and Syria, where cities are the main battlefields. Thus new Unexploded Ordnance (UXO) and Improvised Explosive Devices (IED) clearance challenges arise. The problem is so huge that the United Nations estimate that it will take decades to clear Syria of all unexploded devices, from hand grenades to hundreds kilogram aviation bombs and IED’s. Today, mine clearance is mainly done by hand, which is not only extremely dangerous, but also very slow and expensive.

Since 1998, the Digger Foundation has successfully led de-mining projects in many countries, including Bosnia, Senegal, Mozambique and, in 2016, Angola. In rural areas, its main tool is the DIGGER 250, a 12-ton armored and remote controlled machine capable of destroying mines buried up to 20 centimeters into the ground. As a Swiss-based, non profit organization specialized in high-technology and robotics equipment dedicated to humanitarian demining, the Foundation will address the new challenge of de-mining safely in urban areas with the DOME project.

The DOME project combines robotics, bionic systems and pragmatism to bring an effective solution adapted to this new reality of urban mine clearance. The Digger Foundation has leveraged almost 20 years of field experience and research to come up with a reliable and cost-efficient concept. It solves two distinct issues: on one hand, the localization of explosive material under the rubble; on the other hand, its subsequent destruction. In a first step, mine detection dogs equipped with a DIGGER harnes–made of a GPS tracker, a camera and a loudspeaker–are deployed on the area. The combination of their smell and the smart harness will allow the dog’s handler to map precisely the location of explosives. Effective de-mining will begin with the rubble clearance and/or the transfer of the dangerous device to an open, secure space, to proceed with its destruction. This second step, during which an explosion can happen at any time, requires mechanical tools available on-site. The DOME solution is to use mass produced construction machines which will be transformed into robots and tele-operated from a safe distance, since the pilot will be able to operate the machine through a cockpit displayed in virtual reality goggles. Thus, no human lives will be put at risk even in case of a powerful explosion. The demonstration of the DOME system will take place in Dubai on February 18 and 19
February 2017. The winner of the competition will be rewarded a $1million prize.

Click here for more information from the Digger Foundation.

If you enjoyed this article, you may also want to listen to these Robohub Podcasts: 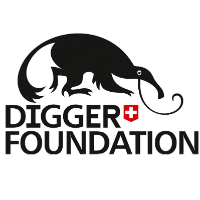 The Digger Foundation is a not-for-profit organisation recognised as a public utility in Switzerland...

The Digger Foundation is a not-for-profit organisation recognised as a public utility in Switzerland...