The scourge of the RoboTroll is already upon us

When a robot ethics working group met nearly three years ago one of the things we fretted about was privacy. We were concerned especially about personal companion robots. Whatever their purpose, be it healthcare for the elderly or disabled, or childcare, or simply Robot and Frank -style companionship, we debated the inevitable privacy issues of this kind of robot. Two aspects directly impact privacy, since personal companion robots are likely to (1) collect and store data and (2) be networked.

We also worried about hacking. The third of our Principles of robotics states: Robots are products: as with other products, they should be designed to be safe and secure. And the commentary for this principle has this to say about hacking:

We are aware that the public knows that software and computers can be “hacked” by outsiders, and processes need to be developed to show that robots are secure as far as possible from such attacks.

It seems our concerns were well founded. Last week a report appeared of a networked baby monitor that was apparently hacked. It was pretty distressing. The hacker was shouting abuse at the baby, chillingly using her name – it seems that he (let’s assume it was a he) was able to gain access to the baby monitor’s video feed and read the baby’s name displayed above her bed. Even more chilling (adding to the parent’s horror) the execrable hacker then turned the camera to look at them when they entered their child’s room to find out what was going on. 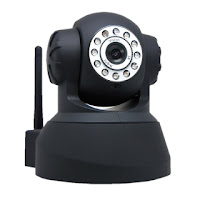 A WiFi IP Camera, aka Baby Monitor is, I contend, a teleoperated robot. The thing that makes it a robot is the motorised pan and tilt mechanism for steering the camera. So, despite password protection, Mr Gilbert’s networked robot was hacked. This particular robot, and I hazard tens of thousands like it, is absolutely not secure from attack.

The consequences of this particular attack were, fortunately, not much more serious than giving the Gilbert’s a fright they surely won’t forget for some time. But for me one particularly egregious aspect of this robot hack – something that the robot ethics working group did not anticipate – was the verbal abuse hurled at baby Allyson and her parents. It is with profound dismay that I ask the question: is the first case of RoboTrolling..?