The sunny side of the roboconomy in the Middle East The Middle East and North Africa’s youthful, fast-urbanizing population are perfectly placed to embrace technology and reap the rewards of the Fourth Industrial Revolution.

Much has been written already about the arrival of the Fourth Industrial Revolution (4IR) and the opportunity that the convergence of its new technologies offers in terms of building value into production systems and economies around the world. In one sense, the playing field could be levelled out. Localized production is being made more feasible for many small producers, setting developing communities on a path towards self-sufficiency, while falling costs could enable factories of all sizes to boost their productivity levels.

However, on the opposite side of the equation, news headlines have been dominated by predictions that human workers will be substituted by robots, leading to widespread job losses and heightened societal challenges. Additionally, doubt has been shed on the ability of regions that are less industrialized, or those with fractured economies and infrastructure, to be able to respond to these disruptions and compete effectively in the future.

For the Middle East and North Africa, it’s a critical question. Clearly, the region contains a mixture of countries in very different situations, ranging from those with active conflicts, challenged societal cohesion and decreasing incomes from natural resource reserves, to thriving, inclusive, relatively advanced economies.

However, the collision of some of the region’s characteristic megatrends with the 4IR phenomenon actually positions it to take a leading role in adopting and leveraging new technologies. Here are some examples:

A rapidly growing, young, tech-savvy population and the role of augmented reality/virtual reality (AR/VR) and wearables. More than 40% of people across the Middle East and North Africa are under the age of 25, and population growth is second only to sub-Saharan Africa. This growth is set to continue, with the total population forecast to reach 700 million by 2050. While clearly this indicates an urgent need to create jobs and build new capabilities, a new generation of millennial workers who have grown up with technology at their fingertips are arguably more likely to adapt to the needs of the new production age. For example, companies could use augmented reality to conduct “hyper-training” for employees, resulting in increased engagement, dramatically faster training times and a more capable workforce.

Urbanization, new infrastructure development and the internet of things (IoT). Around 263 million people – or 62% of the region’s population – are city-dwellers, and this urban populace is expected to double by 2040. This means more construction, and more opportunities to embed IoT devices into current and future builds, traffic management, energy management and other smart systems, to help the region take a leap forward. Cities around the world have begun to harness the power of digital connectivity. Barcelona uses smart lamp posts that sense pedestrians to adjust lighting, sample air quality and share information with city agencies and the public. Singapore uses smart bus fleets that identify issues and significantly reduce crowding and wait times. Dubai has installed new traffic signals that spot the movement of pedestrians and automatically modify the signal timing to encourage more people to walk and help reduce accidents.

Economic diversification, productivity and the role of robots. Volatile oil prices have placed strain on the Middle East’s oil-exporting countries, resulting in a redoubled focus on economic diversification. All of the Gulf Cooperation Council (GCC) countries have designed long-term plans to increase their diversification, attract investment, grow the SME sector and private-sector jobs, and increase GDP and exports. Converging new technologies offer an alternative to traditional routes to development, and make it possible for countries to enter new industry sectors with relative ease.

Examples include “speed factories” that use robots and 3D printing to rapidly produce customized goods, which can help accelerate localization of production. This automation can multiply productivity and enable countries in the region to enter new markets where they could not compete before, such as aerospace-parts manufacturing. Furthermore, the use of automation and autonomy for cargo and passenger movement could increase the region’s competitive advantage.

Of course, there are undoubtedly challenges for the region to overcome as it builds out a new future, all of which will be key in alleviating the foundational reasons of regional security conflicts. Three that are central to unleashing the transformational growth of the Fourth Industrial Revolution are:

Building the right capabilities. Some regions are behind on the path towards industrialization, and it is acknowledged that students and professionals must be better equipped with the relevant skills – not only in STEM subjects, but in the intrinsically human skills that will be in demand more than ever before as automation alters the role for humans in the workplace.

Supportive governance, regulation and policies. This comes down to governments adopting more progressive and inclusive frameworks that encourage demand, stimulate investment, boost enterprise development, reduce corruption and redress the imbalances of historical exclusion in some of its societies.

Pan-regional integration. Finally, in a world where regions are beginning to look inwards, the Middle East and North Africa can stand to gain from improving their regional economic exchanges. Economic integration in the region is among the lowest globally. Increased intra-regional mobility of goods, capital and workforce would enable it to boost economic growth and better cope with the disruptions of 4IR.

I am in no doubt that the Middle East and North Africa stand at the threshold of an enormous opportunity as the digital revolution beckons. I believe that it has the capacity to seize that opportunity and to continue its path towards a highly productive and more integrated future.

Read the original article on the WEF website here. 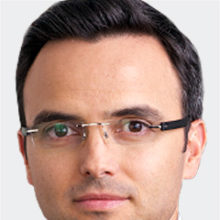 Mauricio Zuazua is a partner with A.T. Kearney Middle East.

Mauricio Zuazua is a partner with A.T. Kearney Middle East.