The business of unmanned aerial, underwater and ground vehicles — originally funded by DARPA, NSF and other government-sponsored research programs — and the many ancillary businesses involved — has grown quickly and dramatically. Lobbying for its interests has been well-funded by defense contractors and very successful in advancing the defense side of the industry. Movies show the technologies in use: e.g., the latest Bourne movie has a Predator strike and also a drone making a pickup of materials at a specified location.

But when the focus broadens beyond military budgets, Congress often leads the way to other opportunities. The mandated integration of unmanned systems into the U.S. national airspace by 2015 has many unmanned vehicle manufacturers re-marketing their technology for civilian purposes.

Underwater and ground vehicles are farther along in that process than the aerial segment. This fact is evidenced by the flurry of underwater projects, joint ventures, and acquisitions being undertaken by the oil and gas exploration and mining industries. The recent Schlumberger joint venture with Liquid Robotics is a good example. The initial purpose of the venture will be for surveillance; seep/spill detection; and communications gateway services. 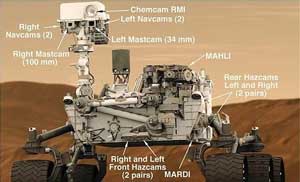 It can also be seen by the steady movement toward driverless trucks and cars by Google and the auto industry and driverless tractors for agri-business. These large-scale projects involve enormous consumer revenues and are overshadowing military UGVs like bomb disposal and military truck convoys and space projects like the Mars rover Curiosity.

Mobile remote presence devices such as iRobot and InTouch Health’s new RP-VITA robot are also taking root and finding multiple uses in the health care sector. iRobot is an example of a robot company diversifying into non-defense endeavors even though their basic research dollars have come from DARPA and the DoD. 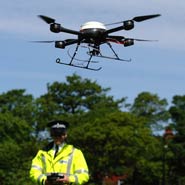 As much as aerial “drones” have been in the news for their surveillance and bombing prowess, unmanned aerial systems (UAS) have not made too much headway toward commercialization because they cannot, at present, fly in civilian airspace and, even if the rules were changed, they still couldn’t fly without serious modifications. A recent $2,000 Research & Markets report on the prospects for the global unmanned aerial vehicle market for the next four years shows only limited growth; 4.28% CAGR through 2015.

The consensus of the people I talked with afterwards was that both the FAA and ICAO, although they “talk the talk” of enabling the transition, are far from where they need to be to truly make it happen.

Because UAS technology is here to stay and will only grow in size, there are steps being taken to comply with what the industry expects the rules to be. These include setting up multiple-state UAS testing centers and establishing two new schools for unmanned flight training, one in the US and the other in Europe. These new entities will be able to customize their curricula and procedures to prepare their clients for various licensing and certification requirements once they are established by the FAA and ICAO.

Along the line of making changes that are inevitable, the International Association of Chiefs of Police (IACP) adopted guidelines for the use of unmanned aircraft systems by law enforcement agencies. The guidelines provide an outline of how to use UAS safely and responsibly and with respect to individuals’ privacy. The adoption of the IACP guidelines follows the recent adoption of AUVSI’s “Code of Conduct” for those who design, test and operate UAS.

Industry executives know they will have to change from the loose and unusually permissive regulatory situation they have had up until now. As the war in Afghanistan scales down, a portion of the industry’s forward-thinking companies are focusing on commercializing their product lines and are attempting to wean themselves away from defense contracts even though there will still be a large business in the civilian first-responder marketplace.

Also, since most of the current UASs do not have the systems or maneuverability to safely fly in civilian airspace, the industry needs to enhance its products to be more robust, incorporate redundant systems, situational awareness and other collision avoidance sensors and communication systems. These are not insignificant modifications and there have been a few notable recent incidents of lost-link and mid-air collisions, including the recent clamor when a UAV lost its link and was on a direct course for Washington, DC. Present-day payload systems used in manned aircraft, although very capable, are also big and heavy. They will need to be miniaturized in order to be able to fit into the limited payload capacities of UASs.

A Few Companies Transitioning to the Civilian Marketplace

Although the robotics sub-set of the aerospace/defense industry quite large, dynamic and technologically advanced, it has not been highlighted in The Robot Report. Because of my personal bias, the opposite is true. It was with that partiality in mind when I walked the exhibition halls of AUVSI and overheard conversational fragments that included words like “war,” “killing,” “fear,” “nervousness,” etc., that I searched for companies that were making an effort to modify and market their products outside the military/defense/security sector.


Here are a few of the companies transitioning to the civilian marketplace:

This year’s AUVSI show was transitional in the sense that the majority of the exhibitor’s businesses has come from governments around the world, and those governments —like the U.S. — are facing significant cuts in spending. Hence the need to step up the lobbying to keep spending high (as appears to be the case of the large aerospace conglomerates), or seek ways to modify products and transition to the commercial marketplace (as can be seen by the short list of companies described above).