Headlines preceding the Global Future 2045 Congress proclaimed: WORLD’S MOST HUMAN-LIKE ANDROID TO BE UNVEILED AT GF2045

“Facial expressions were created with 36 degrees of freedom (servomotors) with high-resolution sensors in the eyes. The Dmitry Avatar-A head also benefits from a new hyper-expressive formulation of Hanson’s proprietary nanotech material called “Frubber,” a spongy, structured elastic polymer that expertly mimics the movement of real human musculature and skin, as well as new mechanisms for improved facial expressions,” explained Hanson. 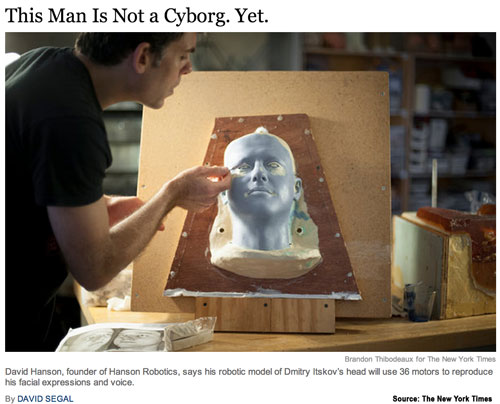 In addition to the press releases, an in-depth NY Times article by David Segal described how it was being built, showed pictures of the work in progress, told what it was to do, and the personality and language characteristics that it was to incorporate.

Well it didn’t happen. None of it.

Rumor had it that Hanson was running late. His day 1 speaking spot was moved to day 2. But as day 2 progressed Hanson still hadn’t arrived. GF2045 staff stretched the various talks and roundtables. At 5:30 of day 2, in a flurry of rushing people, Hanson and his wife and child arrived and were immediately whisked away to a stage anteroom with not a single comment to the waiting press and camera crews (and not an android head in sight; not even big unmarked boxes). At 6 pm Dmitry Itskov had a choice: extend the conference to add Hanson and his AI partner Ben Goertzel, or give his summary and farewell remarks with perhaps a comment or two about why the new android didn’t appear. He chose to ignore the situation and ended the conference with his summary statement.

Those of us who came to see the new Hanson head, Goertzel’s AI, and Itskov gestures, went away disappointed.

In an official statement released by the the 2045 press crew, Dmitry said:

“We so appreciate the patience and support of everyone waiting for what we thought might be a concluding crescendo to the congress. But just like many other technological advances, failure is sometimes a part of the road to success. While we had hoped to see the android head in full working order weeks ago, there were delays and it arrived in a much too premature condition to show to the public. We hope that we can show you something very soon.”

I asked David Hanson what had happened and he replied by email:

I’m sorry! I worked hard to finish the robot in time, but it proved impossible.  Actually my team and I worked all night Friday and Saturday, arriving in NYC on Sunday afternoon. Because the robot wasn’t finished to his satisfaction, Dmitry canceled our talk and chose not to show the robot. I understand his decision and regret the inconveniences to you and everyone who came to see me and Ben. My robots are complex works of art, and this is the most complex and ambitious one I’ve made yet. I know there are risks and uncertainties that come along with making such robots; however, it’s heartbreaking to me to miss this deadline, and I am sorry.

Hopefully Hanson will get the new avatar to work to Dmitry’s satisfaction and Dmitry will show it to the public soon. I can’t wait!

By the way, the GF2045 conference was really interesting and worthwhile. I’ll have another posting on that shortly.