BUDDY goes into final hours of crowdfunding at +500% of goal; announces new US offices BUDDY, the world’s first affordable companion robot, has reached a crowdfunding milestone. With just hours to go on the BUDDY crowdfunding project on Indiegogo, backers have contributed over $501,638 – that’s 502% of the initial goal!

The campaign has also unlocked 12 stretch goals including:

And Blue Frog Robotics has also announced some accessories including:

Developed by the French company Blue Frog Robotics, BUDDY beat his crowdfunding goal ($100,000) in a day, and has been filmed and written about across the world.

BUDDY has a new (second) home

BUDDY enjoyed an enthusiastic welcome on his first visit to the US in August to meet press, investors and fans. He’ll be a regular visitor as Blue Frog Robotics announced the opening of its North American offices in Boston and San Francisco .

“Buddy whisks around on wheels and casters while JIBO, another social robot option, swivels harmlessly on your desk or floor” – Dominic Basulto, The Washington Post

“Buddy marks an advance in the progression of agents from Siri to Amazon Echo, as it moves and interacts proactively” – Ross Rubin, Venture Beat

Rodolphe Hasselvander, creator of BUDDY, says: “We are incredibly overwhelmed and thankful for the love and support BUDDY has received over the past month. The reaction from people is beyond even my wildest of expectations.” 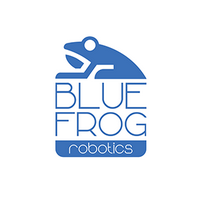