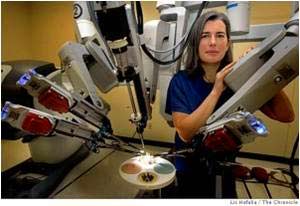 On February 1st of this year, Catherine Mohr, Director of Medical Research and chief spokesperson for Intuitive Surgical (ISRG:NASDAQ), gave a talk on the campus of CMU. (Video of talk and Q&A).

I watched the video wherein Mohr pointed out that most of the new robotic-assisted surgical procedures, including those provided by her company’s da Vinci Surgical System, are simply improved versions of surgeries that have long been done through open or laparoscopic access — and that’s not disruptive.

She felt that new technologies are poised to profoundly disrupt the field of surgery … new methods that will enable the body’s own immune system to fight off problems, or new systems that will enable doctors to implant medicines in just the right spot to fight a disease without corrupting other nearby organs. 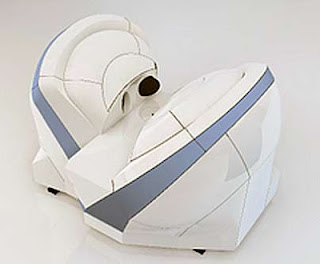 Last week I had the good fortune to visit the Institute of Robotics and Intelligent Systems (IRIS) Labs at the Swiss Federal Institute of Technology (ETH) in Zurich, Switzerland. I saw some products in their final stages of development that fit the disruptive aspect of what Mohr was talking about. Headed by Professor Bradley Nelson and his team of 40 researchers, Masters and PhD students, and postdocs, the ETH IRIS lab is (amongst its many projects) in the process of spinning-off a medical device company that is developing a new type of robotic catheter steering system which uses patented technology for electromagnetic manipulation.

Nelson is also a founder and member of the Board of Directors of Aeon Scientific. Aeon’s magnetic catheter steering system is initially set up to support electrophysiologists during catheter ablation procedures for the treatment of arrhythmias, such as atrial fibrillation. It allows them to move the ablation catheter within the heart of the patient using magnetic fields. The improved control leads to better outcomes and reduced treatment costs. 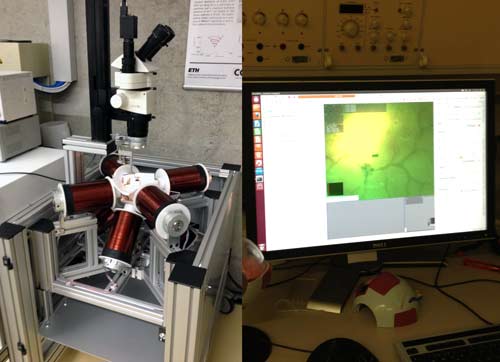 Note the little rectangle in image of eye retina. That’s what gets moved by magnetic steering device on left.

Aeon’s new technology is a platform with the potential for other medical applications such as gastroenterology, neurosurgery, ophthalmics, and targeted drug delivery. I saw an example of the targeted drug delivery as it relates to ophthalmics: moving a micron-sized object placed into the retina of an eye. The medical delivery system consists of the steering system (the magnetic coils and lens system on the left; a miniature of the fully-sculpted one shown in the human-sized cardiac system is shown above) and a computer station that allows the doctor to steer the little micron-sized rectangle (you can see the rectangle in the center of the photo on the right) to the exact right spot for it to deliver its therapeutic medicine.

This is exactly what Catherine Mohr was talking about: delivering medicine to the exact right spot so that it can safely do its job.