Modex 2012: Robotic and smart technologies for handling material in factories and warehouses

In the emerging world of service robotics, many markets are opening to robotics that were once only handled by industrial robot manufacturers. Safely unmanned, or working alongside human workers, in a show focused on handling materials in the factory and also in the warehouse, Modex 2012, held in Atlanta (after 16 years in Cleveland), displayed the wares and solutions offered by 560 vendors and covered all aspects of picking, packing, handling and transporting material. Unlike industrial robots from the past, the newer robots displayed at Modex are able to adapt, easy to use and intuitive to operate.

After talking with many exhibitors, my impression is that there were more buyers than in previous years and those buyers appeared to be holistic in their approach to revamping their material handling in the factories and storage and pick and pack setup in their warehouses.

Their reasoning, and the underlying economic drivers for their renewed interest appeared to be:

Although there were not a lot of robots or robotic components shown, their presence was implicit in all but the most utilitarian booths. For example, free-form vision-guided navigation (with collision avoidance) instead of tapes, ceiling signals and other path marking methods was openly praised and thought of as finally being of sufficient robustness, safety, speed and minimal programming, to finally become a realistic choice for material handling so many vendors were showing how they were adapting.

Vendors I thought of as particularly interesting at Modex included:

Brad Berger, editor-in-chief of SupplyChainBrain magazine, said that investing in automation for material handling is back after many years of being put off because of the economy. Buyers are creating smart warehouses where RF, voice, barcodes, tablets and software all work together seamlessly as tools in the bigger picture of moving, handling, picking and packing our materials and products.

As an aside, and with a focus on which companies will lead this new world of robotic augmentation of material handling and the workers involved, Adept Technology (NASDAQ:ADEP) appears to be moving toward bridging the gap between industrial robotics and the very real need for safer, more flexible, vision-enabled, mobile and easily trainable service robots. Today they announced a collaboration with Willow Garage to harness Willow Garage’s ROS (robotic operating system) so that new methods can be used to control, simulate and program legacy industrial robots. Through acquisitions and business acumen and software changes, they seem to be successfully entering the service robotics sector adding those extra values – along with robustness, durability, connectivity and ease of integration that the industrial robotics manufacturers presently provide. 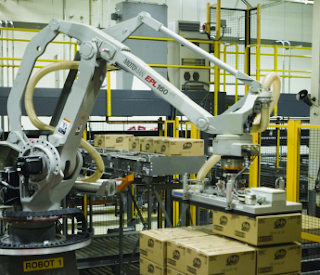