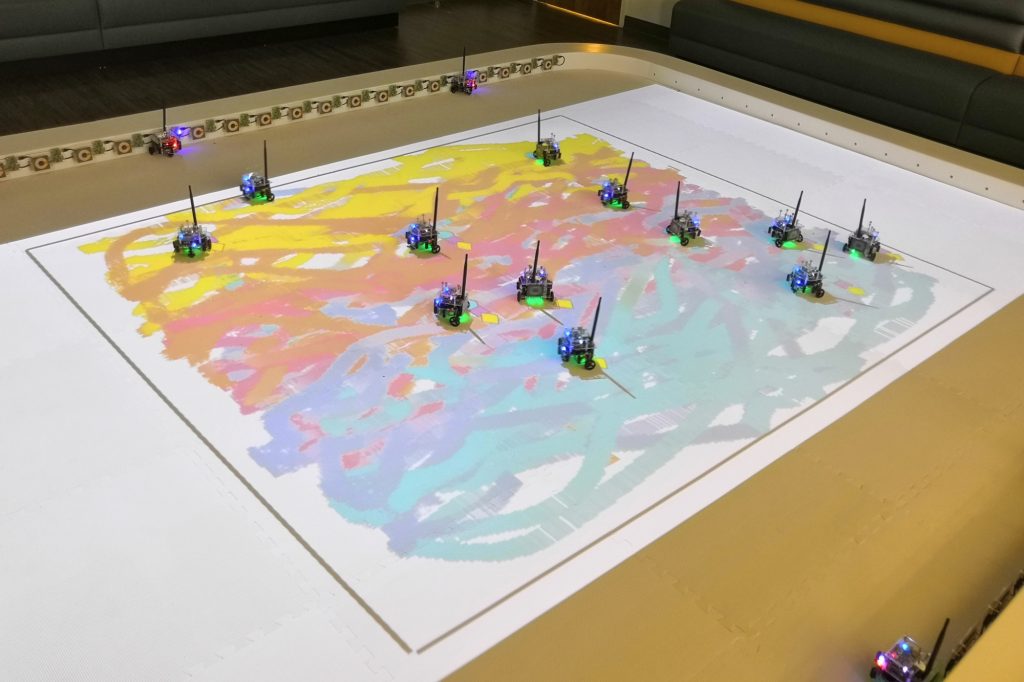 Controlling a swarm of robots to paint a picture sounds like a difficult task. However, a new technique allows an artist to do just that, without worrying about providing instructions for each robot. Using this method, the artist can assign different colors to specific areas of a canvas, and the robots will work together to paint the canvas. The technique could open up new possibilities in art and other fields.

What if you could instruct a swarm of robots to paint a picture? The concept may sound far-fetched, but a recent study in open-access journal Frontiers in Robotics and AI has shown that it is possible. The robots in question move about a canvas leaving color trails in their wake, and in a first for robot-created art, an artist can select areas of the canvas to be painted a certain color and the robot team will oblige in real time. The technique illustrates the potential of robotics in creating art, and could be an interesting tool for artists. This human-swarm interaction modality may also provide a basis for collaborative studies combining the arts and other sciences.

Creating art can be labor-intensive and an epic struggle. Just ask Michelangelo about the Sistine Chapel ceiling. For a world increasingly dominated by technology and automation, creating physical art has remained a largely manual pursuit, with paint brushes and chisels still in common use. There’s nothing wrong with this, but what if robotics could lend a helping hand or even expand our creative repertoire?

“The intersection between robotics and art has become an active area of study where artists and researchers combine creativity and systematic thinking to push the boundaries of different art forms,” said Dr. María Santos of the Georgia Institute of Technology. “However, the artistic possibilities of multi-robot systems are yet to be explored in depth.”

This latest study looks at the potential for robot swarms to create a painting. The researchers designed a system whereby an artist can designate different regions of a canvas to be painted a specific color. The robots interact with each other to achieve this, with individual robots traversing the canvas and leaving a trail of colored paint behind them, which they create by mixing paints of different colors available on-board.

“The multi-robot team can be thought of as an “active” brush for the human artist to paint with, where the individual robots (the bristles) move over the canvas according to the color specifications provided by the human,” explained Santos.

In their experiments, the researchers used a projector to simulate a colored paint trail behind each robot, and they plan to develop robots that can handle liquid paint in the future. As a result of the developed system, even when some robots didn’t have access to all the pigments required to create the assigned color, they were still able to work together and approximate the color reasonably well.

This system could allow artists to control the robot swarm as it creates the artwork in real time. The artist doesn’t need to provide instructions for each individual robot, or even worry whether they have access to all the colors needed, allowing them to focus on creating the painting.

In the current study, the resulting images are abstract, and resemble a child’s crayon drawing. They show unique areas of color that flow into each other, revealing the artist’s input, and are pleasing to the eye. Future versions of the system may allow for more refined images.

Most importantly, the images confirm that it is possible for an artist to successfully instruct a robot swarm to paint a picture. The technique may also have potential in other fields where easily controlling the actions of a swarm of robots could be valuable. Robot orchestra, anyone?