This episode features an interview with Robert Wood about his micro-robotic fly, as well as a talk with the curator of design at the Museum of Modern Art in Manhattan.

Professor Robert Wood is the founder and director of the Harvard Microrobotics Lab at Harvard University. He initially started out at Ron Fearing‘s Biomimetic Lab at Berkley working on the Micromechanical Flying Insect (MFI) project (see Talking Robots interview). Strong of his experience with designing the tiny, he went on to build his own microscale robots for aerial, terrestrial, and aquatic environments. His recent article in IEEE Spectrum Magazine, “Fly, Robot Fly” describes the first flight of his tethered fly:

« It began when I took a stick-thin winged robot, not much larger than a fingertip, and anchored it between two taut wires, rather like a miniature space shuttle tethered to a launchpad. Next I switched on the external power supply. Within milliseconds the carbon-fiber wings, 15 millimeters long, began to whip forward and back 120 times per second, flapping and twisting just like an actual insect’s wings. The fly shot straight upward on the track laid out by the wires. As far as I know, this was the first flight of an insect-size robot. »

Now that the micromechanical structure has proven it has sufficient thrust to actually lift the robot off the ground, the questions focus on how to power the robot insect and what sensors and control could allow it to perform its intended long term applications, namely search and rescue, hazardous environment exploration, environmental monitoring, and reconnaissance.

Wood also gives us some insight on how Biology has been driving his research and how he hopes to be able to return the favor by using his platform to study flies in nature. 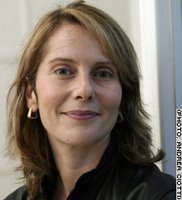 Rob Wood’s robotic fly was featured as part of an exhibition at the Museum of Modern Art (MoMA) in New York City entitled Design and the Elastic Mind. We had a talk with Paola Antonelli, the curator of the Department of Architecture and Design at MoMA, about the role of design in helping people cope with momentous changes in science and technology. How will designers help people adapt as robots become ubiquitous in our daily lives? How does our experience in nature affect the design of future robotic systems? Paola takes us through a brief tour of a designer’s perspective of science and technology.

Visit the Robots Forum for links and discussions about

iRobot’s “Seaglider” underwater robot, the DARPA contract awarded to iRobot for the Chembot, the sale of the autonomous car “Odin” and EMA the robotic girlfriend mentioned in the podcast.