In today’s show we’ll be dabbing at the subject of active touch. Our first guest, Tony Prescott from the University of Sheffield in the UK has been looking at how rats actively use their whiskers to sense their environment and how this can be used in robotics or to help understand the brain. Our second guest, Elio Tuci, evolved a robot arm to touch an object and then figure out what the object is as a first step towards understanding language in humans. 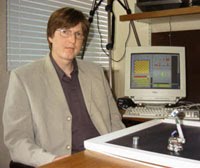 Tony Prescott is Professor of Cognitive Neuroscience at the University of Sheffield, co-director of the University’s Adaptive Behaviour Research Group and Director of the Active Touch Laboratory. In the scope of several large European projects, such as BIOTACT and ICEA, he’s been frisking the whiskers of rats to study how they can be used to actively interact with their environments and how the signals from these sensors tap into the brain. To test models he’s inferred from high-speed images of real rats, Prescott has been working with a rat-like robot called SCRATCHbot developed in collaboration with the Bristol Robotics Lab. SCRATCHbot is equipped with an active 18-whisker array and a non-actuated micro-vibrissae array located on the “nose”. Its head is connected to the body by a 3 degrees of freedom neck, and the body is driven by 3 independently-steerable motor drive units.

More generally, whiskers have a real potential in robotics applications for their ability to detect and categorize objects and surface textures while only lightly touching the objects they interact with. Touch is still a widely untapped sensor modality that could be strapped to robot arms, cleaning robots and maybe your LEGO robot. For this purpose, Prescott is looking at creating an off-the-shelf version of the rat’s whisker system. 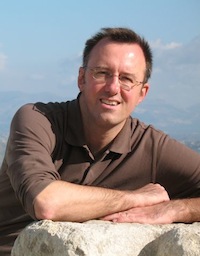 Elio Tuci is a researcher at the Institute of Cognitive Sciences and Technologies of the Italian National Research Council, member of the Laboratory of Autonomous Robotics and Artificial Life. Tuci is currently working on the ITALK Project which is studying the various aspects of language and how humans learn to speak. He tells us about how active perception is an integral part of how we learn to categorize objects, a necessary prerequisite to developing language. He speaks in particular about his recent work on a robot arm that evolved to discriminate between different objects such as ellipses and circles using active touch.