In this episode we talk to Subramanian Ramamoorthy from the University of Edinburgh about the recent progress in walking robotics. We then speak with Felipe Brandão Cavalcanti who is an Electrical Engineering student working on bipedal walking at the LARA lab at the University of Brasilia with Professor Geovany Borges. 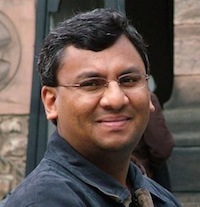 Subramanian Ramamoorthy is a Lecturer in Robotics at the School of Informatics, University of Edinburgh. Previously, he received a PhD in Electrical and Computer Engineering from The University of Texas in Austin.

His current research work focuses on autonomous decision making over time and under uncertainty, by long-lived agents and agent teams interacting with continually changing worlds. He has twice been a finalist for the Best Paper Award at major international conferences in the field of robotics – ICRA 2008 and IROS 2010. His team Edinferno, was the first UK entry in the Standard Platform League at the RoboCup International Competition.

Ramamoorthy tells us about the recent advances in humanoid bipedal walking illustrated by Petman and the latest version of Asimo. In particular, we look at the history of the field with work from Mark Raibert, Russ Tedrake and Daniel Koditschek and how different areas, such as machine leaning and motion capture, come together to accelerate progress.

Felipe Brandão Cavalcanti is an Electrical Engineering student who works with humanoids at the LARA lab at the University of Brasilia with Professor Geovany Borges. The project focuses on the study and implementation of gait generation and stabilization algorithms for small humanoid robots.

He tells us how they hacked a humanoid toy to improve its balance and the importance of math in his work.