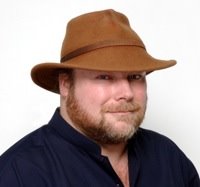 In today’s episode we speak with Mark Tilden, about the history before WowWee‘s RoboSapien and FemiSapien and about his belief that bottom up BEAM robotics (which stands for Biology, Electronics, Aesthetics, and Mechanics) is essential in creating low cost, competent, robust and flexible robots.

Mark Tilden is a true robotics lover, having built thousands of robots of all shapes and sizes in the last few decades. During the first part of his career he pioneered BEAM robotics, a philosophy of building robots based on simple analog circuits and control instead of highly-complex systems, leading to low-cost and efficient systems. His bio-inspired bots manage to walk, crawl, roll or shake in complex environments using only a few transistors and basic sensors.

After working at the University of Waterloo in Canada and subsequently at the Los Alamos National Laboratory in New Mexico, Tilden’s research eventually evolved into toy design when he was hired as a consultant for WowWee robotics in Hong Kong. His RoboSapien humanoid robot was controlled using only 28 transistors, and has sold in the millions. We covered his work at WowWee in a previous version of the podcast about Robot Toys.

In this episode, Tilden gives us an intriguing glimpse into the future. He is currently working on taking the basic BEAM technology in his toy robots and adapting them to perform useful tasks. Using flexible robots, rather than many dedicated systems, is a powerful concept but it also brings with it some tough requirements ranging from look and feel to battery life and safety. He sums up the requirements nicely when saying “your robot has to perform its task quietly, elegantly and in conjunction with you”.

And if you are into picking things apart and building new things, the BEAM technology and RoboSapien and FemiSapien are definitely your thing. They are actually meant to be disassembled and the components are all labeled and documented so that you can use them for many things.