In this episode we focus on chaos control and ways to generate unpredictable behaviour. Our first guess, Poramate Manoonpong is a research associate at the Bernstein Center for Computational Neuroscience in Göttingen, Germany where he studies ways to make an insect like robot get out of tricky situations by generating chaotic input to a central pattern generator (CPG) in charge of the robot’s gait. We then speak with Alex Pitti from the University of Tokyo about chaos controllers that can synchronise to the dynamics of the body they are controlling, thus creating more complex behaviours while at the same time simplifying the controller. 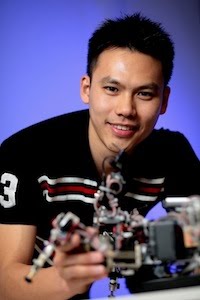 His recent work on Self-organized adaptation of a simple neural circuit enables complex robot behaviour was recently published in Nature Physics. In this work, he explains choas control, CPGs and learning applied to one of his insect-like robots. The CPG composed of only two neurons is used to control the walking gait of the robot that is packed with actuators. By peppering the CPG input with a bit of chaos, the robot is able to get itself out of tricky situations by randomly trying out different walking gaits. Learning is then used to help the robot adapt its gait to save energy depending on the inclination of the slope it is walking up. Interestingly, his work can even contribute to biology.

Manoonpong has one of the nicest personal websites in the roboticist community so make sure to have a look around to see some of the insect-like, running or modular robots he’s worked on. 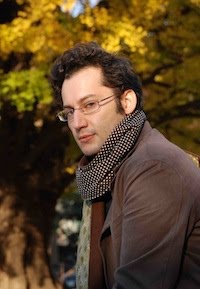 Alex Pitti is a researcher at the Intelligent Systems and Informatics Lab at the University of Tokyo in Japan. He’s currently working on the JST Erato Asada Project, the goal of which is to study how infants, one of the world’s most complex learning systems, learn to control the dynamics of their body. The lessons learned from infants are then applied to the control of complex robots with many non-linear actuators.

Pitti’s recent work has focused on the interaction between an oscillating controller and the morphology and dynamics of the body it is controlling. He tells us how we can create controllers that can synchronise to the material properties of the body to create much more dynamic motions while at the same time reducing the complexity of the controller. A few simple global parameters can then be used to control highly complex synchronised motions such as dynamic hopping or running of a robotic leg.

The Robots Forum has more information on this episode’s news, including a video of RoboSoft’s new care robot, farewell pictures of one of the first AUVs, Woods Hole’s Autonomous Benthic Explorer ABE, and some background information on the robotic arm support.