In today’s episode we speak with David X. Cohen, the head writer and executive producer of Futurama! 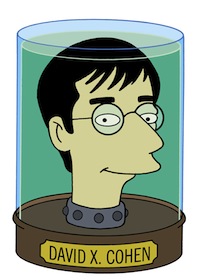 In addition to becoming one of TV’s best known writers, David X. Cohen has always had a vested interest in the sciences, receiving his Bachelor in Physics from Harvard University and a Masters degree in Computer Science from Berkeley. During graduate school David started writing for television, eventually writing for The Simpsons with creator Matt Groening. From their collaboration was born Futurama.

Futurama portrays society in the 31st-century. The show provides a very funny account of the ever increasing incorporation of technology into our lives. True to science-fiction tradition, the future is filled with robots albeit those with terrible personalities and odd responsibilities including growing replacement hair for humans.

In this episode, Cohen tells us about how he creates robots for television and describes his vision of the future of human society.

Describe a robotic character you would like to see on Futurama in the comments section below. Make your character funny, moving, crazy or sad and as graphical as possible! If we like your character most, we’ll send you a Futurama DVD of your choice. The contest ends on the 22nd of October.

Latest News:
More information on this week’s news (the thought-controlled rat wheelchair and the new field of robot anesthesia) can be found in the Robots forum.


Amanda Prorok’s talk – Learning to Communicate in Multi-Agent Systems (with video)
Robots flying a kite to generate electricity. What if you would use this?
Long-distance robot-assisted heart surgery and beyond
Building a 7 axis robot from scratch
Talking Robotics’ seminars of January – April 2021 (with videos and even a musical summary!)
more about ..
comments powered by Disqus