Jumping and crawling in millirobots, with Sarah Bergbreiter and Aaron Hoover

This episode concentrates on how to scale down robots to the size of our creepy crawly friends, insects. Sarah Bergbreiter tells us about the micromachining techniques required to build jumping robots at this small scale and the applications in sensor networks. Aaron Hoover then talks about his 6-legged crawling robot that is slowly approaching the cockroach in size and locomotion capability.

Sarah Bergbreiter is Assistant Professor of Mechanical Engineering at the University of Maryland where she directs the Micro Robotics Lab.

With her vision of mobile sensor networks composed of large numbers of autonomous robots, Bergbreiter first started designing the CotsBots, built entirely from commercial off-the-shelf components. She then went to micro-sized robots which could be used in a non-invasive manner in their deploying environment. As a first step in her endeavor she contributed to Seth Hollar and Anita Flynn‘s walking microrobot and then went on to her own tiny jumping robots to achieve better mobility. To enable jumping, she demonstrated the quick release of a mechanical leg based on a silicon micro rubber band (see video here).

Finally, to avoid spending hours in a clean room, Bergbreiter is looking to develop fabrication techniques for the fast prototyping of novel robots, in particular with respect to challenges in scaling down robotic components for energy storage, actuation, power, sensing and control.

Aaron Hoover is a research assistant in Prof. Ron Fearing’s lab at the University of California at Berkeley. His expertise lies in the use of novel manufacturing techniques based on smart composites, flexure joints and folding structures. Hoover’s efforts to mimic complex biological systems such as beetles that can run over a myriad of surfaces has culminated in the 2.4g RoACH hexapod robot. The RoACH is capable of crawling autonomously at 1 body length per second and can last for almost 10 minutes on a single charge. Check out a video of the RoACH in action! 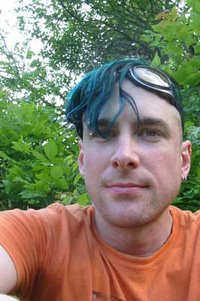 In the third quarter of the science fiction story “Selkies” by author Jack Graham, we meet researcher Sylvia Ochoa from the UN Marine Fisheries and follow Mangan in his endeavor to shark-proof his robot-seals. Don’t miss his other SciFi stories straight out of Cambridge MA on lonesomerobot.com, such as “arm” and “posthuman playground“.

Visit the Robots forum for links, videos and discussions
about the wirelessly-powered robot swarm, the new robotic instrument which allows surgery on a beating heart and the iPhone’s robotic legs.