Today’s show is centered around robots in the air, and more specifically on Unmanned Aerial Vehicles (UAVs) of the quadrotor variety. We chat with Joshua Portlock from Cyber Technology about their portfolio of different-sized UAVs with special emphasis on the CyberQuad, a four-rotor helicopter with advanced autonomous capabilities. Near the end of the show we also start what will hopefully be an animated debate on what exactly is the definition of a Robot, so join in the discussion! 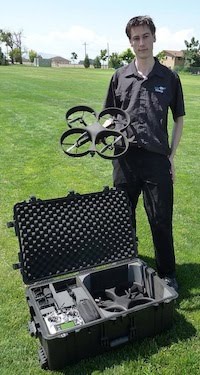 Joshua Portlock is the project manager of the CyberQuad project at Cyber Technology out of Perth, Australia. Portlock tells us about his company’s fleet of UAVs and their increasingly broad range of applications in the civil market. He then gets into the nitty gritty on his own creation, the CyberQuad, a four-rotor autonomous aircraft that’s the final result of years of research started while he was still an engineering student at the Curtin University of Technology.

The CyberQuad is a highly-optimized quadrotor that uses ducted fans to increase the efficiency of the drivetrain and provide protection from obstacles. Recently featured in Wired magazine, the platform can fly and hover in constrained environments and has already been used to visually survey oil platforms, bridges or search for bushfires in the Australian outback before they go out of control.

Have you ever wondered what a robot really is? Over coffee the other day we were trying to find a sleek and simple one size fits all definition for all the robots we’ve covered on the show from molecular robots to smart houses, humanoids or flying crawling and jumping robots. However, for every definition we came up with there was a counter example that either didn’t fit the definition or did although it wasn’t really what we think of as a robot! For example, the definition “A robot is a machine with inputs and outputs” was not satisfying because a calculator fits that definition although it is not a robot. Therefore, every episode from now on will explore a new or modified definition and submit it to the “counter-example” test until we are satisfied with the result. We’ll be asking our friends, colleagues and you our listeners for your best answer to the question “What is a robot?”. If you think that you have a good answer, email us your short definition at info@robotspodcast.com with your phone number so that we can call you and ask you directly on the air!

For more information on the future of the Spirit Mars Rover, the plans for a fuel-cell powered exoskeleton and Korea’s Mahru-Z robot, visit the Robots Forum.