R&D at iRobot with Brian Yamauchi.

In this episode we look at the Research and Development (R&D) done at iRobot in the government field with lead roboticist Brian Yamauchi. 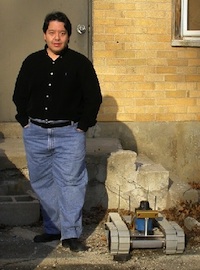 Brian Yamauchi is Lead Roboticisist at iRobot in Bedford, MA where he leads many of the government projects aimed at helping soldiers and first-response teams do their work.

During this interview, Yamauchi covers some of the developments done over the past 10 years, most of which are based on the PackBot robot. In particular, he’ll be telling us how they make these robots more robust and what sensors they’re using to increase autonomy, and even map out the world. One of these sensors, the ultra-wideband radar, was presented at this year’s ICRA conference in Alaska (paper).

Beyond the single PackBot, Yamauchi is now looking at how to make robots collaborate with examples in terrestrial and aerial robot team and mobile wireless transmitters for the quick deployment of communication networks.

Moreover, because many of the government robots developed at iRobot are being used in Iraq or Afghanistan, he’ll be telling us about the research in making good soldier-robot interactions and the ethics of military robots.

Finally, we’ll be learning more on the business of iRobot and the futuristic projects they’re working on such as the chembot and jambot projects that involve making soft and deformable robots (see video below).

Before working at iRobot, Yamauchi completed a PhD in Computer Science from Case Western Reserve University and worked at the Naval Research Laboratory (Washington, DC).

In this week’s episode we’ll be asking you about your take on the cross-fertilization between the military and robotics. Make sure you take the poll and debate in the comments section below or on our forum.

Latest News:
For videos of this week’s Robots news, including the autonomous robot lifeguard and the sand swimming salamander robot, have a look at the Robots Forum.