This episode is the last of this three part special series about robot art with guest interviewer David St-Onge, an engineer working at the interface of visionary arts and creative science. David was our guest in a previous episode of the Robots Podcast about robot art. He now brings us into his world through in-depth conversations with 6 world renowned experts in the field.

In today’s show, we talk to Leonel Moura, a European artist born in Lisbon, Portugal, and Ken Rinaldo, Director of the Art and Technology program in the Department of Art at The Ohio State University. Both artists are well known for their dual talent as artist and robot engineer, having built most of their systems themselves. 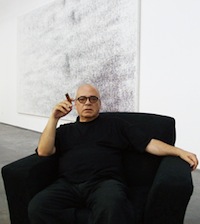 Leonel Moura is an independent artist from Lisbon, Portugal and European Ambassador for Creativity and Innovation since 2009.

His work revolving around robotics and AI started in 2003 with his first swarm of “Painting Robots”, able to produce original artworks based on emergent behavior inspired from ants. Since then he has produced several artbots, each time more autonomous and sophisticated. In 2006 he created a Robotic Action Painter “RAP” for a permanent exhibition at the American Museum of Natural History in New York which is able to generate highly creative and original art works, to decide when the work is ready and to sign it, which it does with a distinctive signature (see video below). In the same year, he built a poet Robot “ISU” that generates random poems in the style of the Lettrist Movement and of Concrete Poetry. He also worked towards the creation of a zoo for robots and AI in Alverca in 2007 and then curated the portuguese show “INSIDE [art and science]“.

In this episode he describes his hope of seeing robotic artificial creativity produce artworks of tomorrow for living and artificial art lovers. 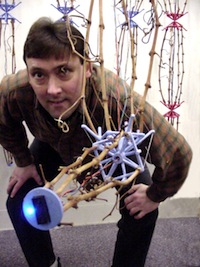 Ken Rinaldo directs the Art and Technology program in the Department of Art at The Ohio State University in Columbus, Ohio. As an artist and theorist, he creates interactive multimedia installations that blur the boundaries between living and artificial systems. He has been working at the intersection of art and biology for over two decades in the categories of interactive robotics, biological art, artificial life, interspecies communication, rapid prototyping and digital imaging.

His artworks have been displayed nationally and internationally at leading museums, galleries and festivals. His latest piece, the “Living Robotic Tongue Installation”, is an artificial tongue that performs massages based on activity of an artificial stomach filled with living bacteria. Other recent work includes the “Edible Ecosystem Sculpture”, “Paparazzi Bots”, “Augmented Fish Reality”, “Autopoeisis” and the “Autotelematic Spider Bots”, an artificial life robotic installation that consists of 10 spider-like sculptures that interact with the public in real-time and self-modify their behaviors, based on their interaction with the viewer, themselves, their environment and their food source.

Rinaldo comes from a family of artists and inventors. Both his parents are contemporary artists. His French Grandfather Jean Vincent Rinaldo was a painter and a member of the Salon Des Independent in Paris. His Scottish Grandfather was an electronics inventor. His Great, Great, Great Uncle was Robert Fulton the American inventor of the steamboat. Born in 1958, Ken Rinaldo studied biology as a teen, ballet in New York City until the age of 20. He has an Associates in Science in Computer Science from Canada College, a Bachelors of Art in Communications from The University of California at Santa Barbara and a Masters in Fine Arts in Conceptual and Information Arts from San Francisco State University.


Perfecting self-driving cars – can it be done?
Robohub and AIhub’s free workshop trial on sci-comm of robotics and AI
ULTRA-SWARM: Creating digital twins of UAV swarms for firefighting and aid delivery
On sustainable robotics
Amanda Prorok’s talk – Learning to Communicate in Multi-Agent Systems (with video)
more about ..
comments powered by Disqus