In this episode we dive into the world of famous science fiction writer Greg Bear. Christine then takes us on an audio journey through one of his books, Mariposa. Finally don’t forget to send us your YouTube holiday videos featuring robots. 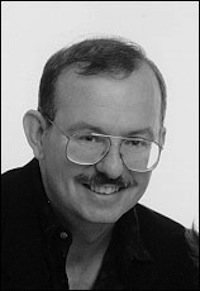 Greg Bear is a famous writer, author of more than thirty books of science fiction and fantasy. Over the years he’s been awarded two Hugos and five Nebulas for his fiction and has been called the “Best working writer of hard science fiction” by “The Ultimate Encyclopedia of Science Fiction.” His expertise in science has gotten him writing about topics from evolution to robotics, owing him reviews in Nature. One of his books, Darwin’s Radio even provided useful insights to biologists.

Regarding robotics, we’ll look at self-awareness, robots as mirrors for the human condition and the extent at which AIs should be given responsibility. We then dive into Isaac Asimov’s work, since Bear is an expert after writing a sequel to the foundation series. He tells us a few of Asimov’s secrets to make popular science fiction and how Asimov’s rules should be applied to robotics, if we don’t want to loose control.

Finally, Bear gives us his vision of the world and tells us how his talent in bringing pieces together within one story has gotten him helping the U.S. Army, the CIA and Homeland Security.

To give you a taste of his work, Christine will read an excerpt from Mariposa describing the early Mind Design artificial intelligence called Jones, which leads to the AIs in Queen of Angels, Slant, and Moving Mars. Check out the Promo for his latest book below.

Latest News:
For a video of the anthrophomorpic running robot’s first dash, or to request a gig of “The Trons” for your XMas or New Year’s celebration, have a look at the Robots Forum.