The future of robot companions with Paolo Dario

In this interview recorded at the Robotdalen Robotics Innovation Challenge, Professor Paolo Dario talks to Per about 3 conceptual waves of innovation, starting with industrial robots, then adding artificial intelligence and finally the third wave, which is coming, where convergence between different fields of science and interdisciplinary teams become increasingly important.

Dario also gives his perspective on ethics and legal issues in robotics, and how robots can evolve based on ambient intelligence. Robots can basically take advantage of being a part of an interconnected system, where not all the intelligence is necessarily part of the robot itself.

Finally, Dario shares some learnings from his time as President of the IEEE Robotics and Automation Society, before telling us more about the FET project Robot companions for citizens. 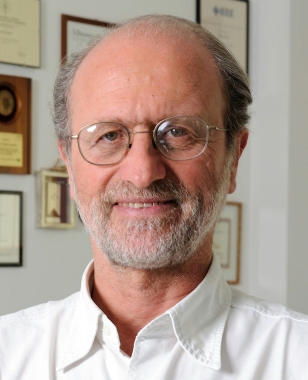 Prof. Dario was the founder of the Advanced Robotics Technologies and Systems Laboratory and is currently the Co-ordinator of the Center for the Research in Microengineering Laboratoryof the Scuola Superiore Sant’Anna, where he supervises a team of about 70 researchers and Ph.D. students. His main research interests are in the fields of medical robotics, bio-robotics, mechatronics and micro/nanoengineering, and specifically in sensors and actuators for the above applications, and in robotics for rehabilitation.

He is the coordinator of many national and European projects, the editor of two books on the subject of robotics, and the author of more than 200 scientific papers. Prof. Dario has served as President of the IEEE Robotics and Automation Society in the years 2002-2003, and he is currently Co-Chair of the Technical Committees on Bio-robotics and of Robo-ethics of the same Society. Prof. Dario is an IEEE Fellow, a Fellow of the European Society on Medical and Biological Engineering, and a recipient of many honors and awards. He is also a member of the Board of the International Foundation of Robotics Research (IFRR). Right now Professor Dario works on the FET Flagship initiative Robot Companions for Citizens, with the goal to realize a unique and unforeseen multidisciplinary science and engineering program supporting a radically new approach towards machines and how we deploy them in our society.