Robotics, by definition, has been a discipline to aid other fields, such as manufacturing and space exploration. Over the past decade, it has become increasingly important in life sciences; a field that has been transformed by the convergence of insights and approaches from distinct scientific and technological disciplines. Robotics can help automate numerous processes — including repetitive tasks used in drug discovery, in vitro fertilization — and in lab bench work, such as analytical testing and preparation of chemical agents.

In our recent paper in Science Robotics, we show how robotics in the life sciences can also enable scientists to study and interrogate biological processes at the microscale in a dynamic and adaptive manner.

I was a PhD student in microrobotics in the Multi-scale Robotics lab at ETH, led by Prof. Brad Nelson, when we started our collaboration at the laboratory for Applied Mechanobiology at ETH Zurich, led by Pro. Viola Vogel. I became fascinated by the range of new problems to tackle in biology, such as integrating feed-back loops for cells and tracking of their shape and motion, problems I had never thought of before exchanging ideas with the Vogel group.

Similarly, Ima Avalos, co-lead author of the paper says: “When I started my PhD studies in mechanobiology, I was totally focused on bacterial adhesion and would not have anticipated that I would end up contributing to a robotics paper at all!”. Well, she did, substantially, and we teamed up to study cellular responses of immune cells when they attack foreign invaders, such as bacteria. When these phagocytes hunt for their microbial prey, they first need to recognize the prey and then form physical contacts sufficiently stable for pickup. Although the forces involved in this pickup process have been studied, little is known about their hunting behavior preceding phagocytosis because of a lack of appropriate technologies. Understanding the cues and processes that determine when phagocytes take up their prey is crucial for advances in immunology and has direct implications in pharmacology. This, in turn, demands an adaptive system that can introduce such cues and is capable of dexterous control at the microscale. Responding to this need, we developed a platform where we coupled a magnetic tweezer system with 3 D control consisting of eight electromagnetic coils to a scanning confocal microscope that allows for life cell recording and fluorescent readout. While with this system we can apply magnetic forces in 3D, we needed as well suitable probes that could serve as microbial prey and be guided by these forces and. We chose spherical, magnetic particles, that are commercially available, and we coated them with the same antibodies that are also presented on the membrane of bacteria. But bacteria are not round in shape, they are rather cylindrical- and as we know from previous studies in this phagocytosis, shape plays a role!

We wanted to study the effect and teamed up with material experts in the Multi-scale Robotics lab. With them, we fabricated bacteria-mimicking microparticles using 2-photon polymerization, a 3D printing technology with nanoscale resolution, to form molds followed by template-assisted electrodeposition to form magnetic cores. Combining these new probes with the control system, unconstrained 3D control of the position and orientation of these artificial prey particles was provided, such as real bacteria would position themselves. Analogous to free floating bacteria and adhering biofilms, we implemented non-resistive and resistive prey modes. Therefore, the translational and rotational trapping stiffness of this artificial prey was dynamically adjusted and, using vision-based feedback control, forces and torques in the sub to low [pN] range and 105 -106 [pN nm rad-1] range, respectively, were applied in real-time.

The energy landscape that guided the translational and rotational movement of these microparticles was dynamically adjusted to explore how translational and rotational resistive forces regulate the modes of macrophage attacks. For translational resistive prey, distinct push-pull attacks were observed. For rod-shaped, nonresistive prey, which mimic free-floating pathogens, cells co-aligned their prey with their long axis to facilitate pickup. Increasing the rotational trap stiffness to mimic resistive or surface-bound prey disrupts this realignment process. At stiffness levels on the order of 105 piconewton nanometer radian−1, macrophages failed to realign their prey, inhibiting uptake.

The moment we had the system finally implemented in the microscope of the biology lab and could control our microscopic probes to interact with cells, a strong bridge was built between our disciplines and labs, and we felt we had developed a platform with which we can tackle a number of biological questions. While we have shown that this technique allows new studies of force-driven phagocytosis modes with large relevance for host defense, the system can also be used for a variety of other mechanobiology studies at length scales ranging from single cells to organ-on-a-chip devices. It can also be combined with microfluidic platforms and allows for magnetic manipulation in vivo, such as in zebrafish or mouse models, work that I have started during my postdoctoral training at the Koch Institute for Integrative Cancer Research at MIT and that I am excited to further expand soon with my own group. A version of this control system is now also commercially available from Magnebotix.com 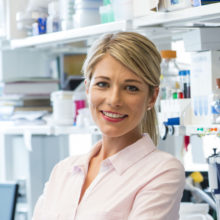 Simone Schürle is a postdoc researcher at the Laboratory for Multiscale Regenerative Technologies.

Simone Schürle is a postdoc researcher at the Laboratory for Multiscale Regenerative Technologies.